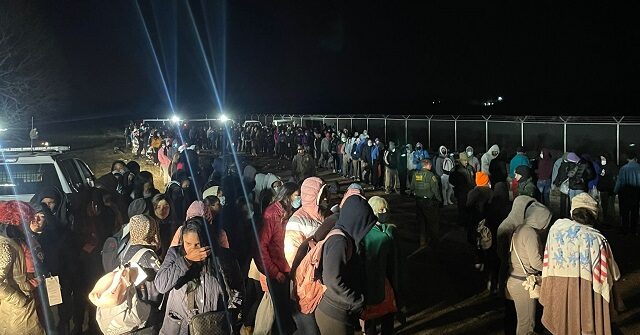 Between 2 a.m. and 6 a.m. Tuesday morning, agents apprehended approximately 1,000 migrants who crossed the border from Piedras Negras, Mexico, into the U.S., according to a source operating under the umbrella of U.S. Customs and Border Protection. The source reported the largest group to be more than 400 migrants who crossed at the same time.

In addition, agents apprehended more than 200 migrants in a single group further north but still on the south side of Eagle Pass.

The source said the migrants consisted mainly of Cuban migrants. The groups also included migrants from Ecuador and Nicaragua.

Human smugglers use the large migrant group tactic to tie up Border Patrol resources for hours. This enables them to move drugs and other high-value human cargo” across the border with less chance of being apprehended. The large groups who crossed in the overnight hours this morning caused agents to remain on duty for nearly 12 hours, the source stated. Other resources had to be called in early.

During the first two months of Fiscal Year 23, Del Rio Sector agents apprehended more than 90,000 migrants, according to the November Southwest Land Border Encounters report published by U.S. Customs and Border Protection Report late on the Friday night before Christmas. This is second only to the El Paso Sector where agents apprehended more than 106,000 migrants during this period.