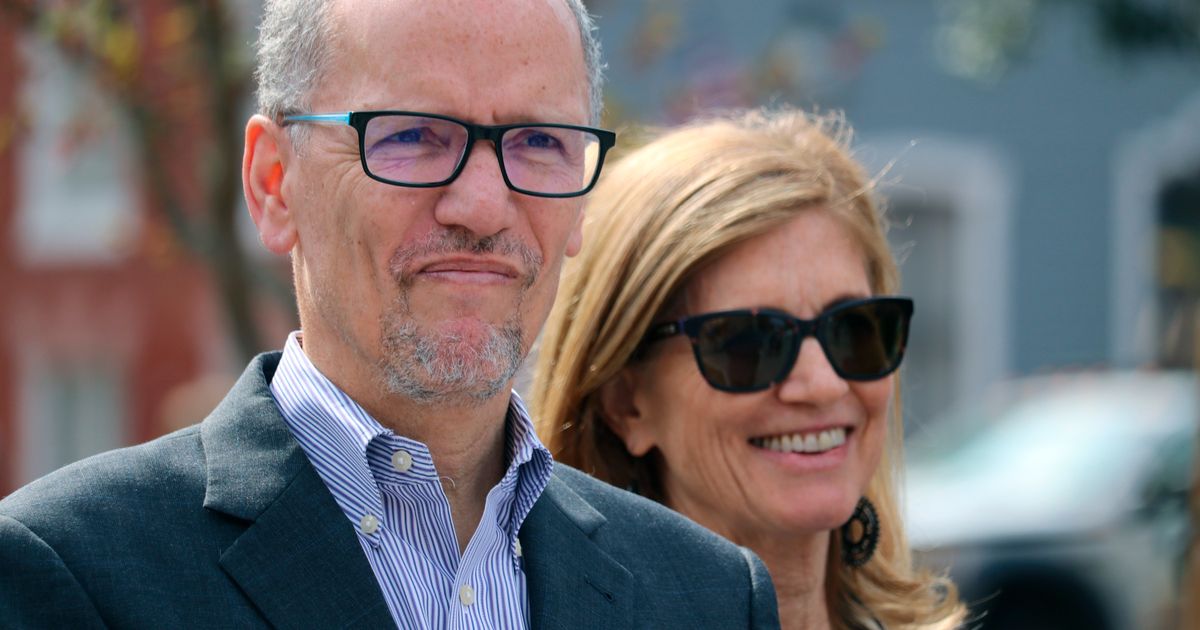 It’s an early showdown on Hogan’s home turf as he weighs a 2024 White House bid, potentially against the former president.

On the Democratic side, the crowded candidate field includes the former head of the national Democratic Party, a bestselling author, the current state comptroller and a former U.S. education secretary.

U.S. Sen. Chris Van Hollen is facing a primary challenge as he seeks a second term following a stroke. In the U.S. House, Maryland has one open seat after the incumbent decided to seek a different office.

Democrats are eager to win back the governor’s office. Hogan is a rare two-term Republican governor in a state where Democrats outnumber Republicans 2-1.

The Democratic primary for governor is shaping up as a competitive three-way race among former U.S. Labor Secretary Tom Perez, who previously served as chair of the Democratic National Committee; author Wes Moore, who held a virtual fundraiser with Oprah Winfrey; and state Comptroller Peter Franchot, who had wide margins of victory in his four terms as state tax collector.

Voters are casting ballots with the potential for history to be made in November: Moore or former U.S. Education Secretary John King could become the state’s first Black governor, and Perez could become the first Latino chief executive in the state.

For the GOP, Kelly Schulz is running as Hogan’s hand-picked successor to carry on his legacy. Schulz served as a labor secretary in Hogan’s administration and later as the head of the state’s commerce department. She is a former state legislator from Frederick County.

Schulz, the only woman in the field, would be Maryland’s first female governor if she were to win in November. She contends she is the only Republican in the primary who could tap into Hogan’s unusual political success in a heavily Democratic state.

She is running against Dan Cox, a state legislator who has been endorsed by Trump. Early in the pandemic, Cox sued over Hogan’s stay-at-home orders and regulations, saying they were unconstitutional. The lawsuit was later dismissed by a judge, who said that Hogan had a duty as governor to protect public health.

Cox also filed a resolution of impeachment against Hogan, accusing him of violating the rights of residents by issuing orders that were “restrictive and protracted” during the pandemic. Lawmakers rejected the effort.

He helped organize busloads of protesters to go to Washington for the “Stop the Steal” rally that preceded the Jan. 6 U.S. Capitol insurrection. Cox has said he didn’t march to the Capitol afterward, and he condemned the violence.

Sen. Chris Van Hollen, a Democrat, is seeking his second term. He first won election to the chamber in 2016, replacing retiring Sen. Barbara Mikulski, who was then the longest-serving woman in congressional history.

Van Hollen suffered a minor stroke in May but said doctors had told him there would be no long-term effects or damage. He said he experienced lightheadedness and acute neck pain while delivering a speech and sought medical care once he returned home.

Van Hollen has just one challenger in his Democratic primary: Michelle Smith, a Freedom of Information Act policy analyst with the U.S. Agency for International Development. Van Hollen previously served seven terms in the U.S. House.

Ten Republicans are seeking the GOP nomination, including Chris Chaffee, who ran unsuccessfully against U.S. Rep. Steny Hoyer in 2014.

Van Hollen, who is expected to win his primary, would be a strong favorite in November. Maryland has not had a Republican U.S. senator in the last 35 years.

The state has eight congressional districts but only one open seat this cycle.

Democratic Rep. Anthony Brown, who has represented Maryland’s 4th Congressional District, is stepping down after three terms to run for attorney general. Former Rep. Donna Edwards, who held the seat from 2008 to 2017, is running to get her job back representing the Black-majority district in the suburbs of the nation’s capital. She will face former county prosecutor Glenn Ivey.

Yorkshire mum mauled to death by her Bully XL

Kevin McKenna: In the war of ideas, the triumph of the left is now being televised