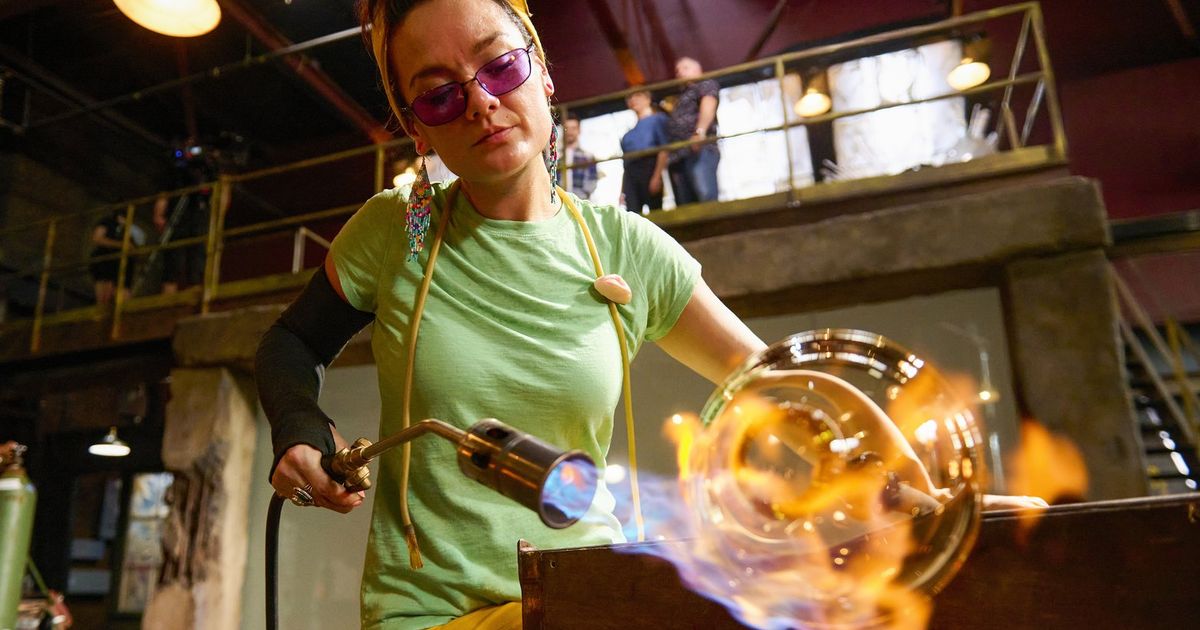 There’s a 30% chance the third season of Netflix’s glass-blowing competition series “Blown Away” will be won by a Washingtonian: Three of the 10 contestants are from around Puget Sound.

“It’s no secret that Seattle is really a mecca of glass,” said Dan Friday, who competes in the new season, streaming now. “When I started in ’97, ’98, there were said to be 400 hot shops between Vancouver, Canada, and Portland, Oregon.”

Friday, of Shoreline, is joined on this season of “Blown Away” by Minhi England of Top Hat, in unincorporated King County, and Trenton Quiocho of Fircrest, Pierce County.

In each episode, contestants scurry about a Hamilton, Ontario, set, doing their best to win over the judges with their glass creations.

Artistic since a young age with an early focus on illustration and painting, England moved to Seattle in 2010 after she fell in love with glassblowing at Alfred University in New York.

“The weather is great for glassblowing here,” England said of the Pacific Northwest. “It rains but it doesn’t get too cold. There’s something really nice about the warm environment in the studio during the winter months in Seattle.”

The presence of Pilchuck Glass School, founded in 1971 by glass artist Dale Chihuly and patrons Anne Gould Hauberg and John H. Hauberg, is another draw.

“Over time, that created a scene here that people would go to Pilchuck Glass School, take classes, be inspired by the beauty of the Pacific Northwest and then decide to make a home here,” said England, 33. She ultimately partnered with the founders of Artful Ashes, which memorializes the cremains of the dead in glass art as an object of remembrance.

England joined Artful Ashes with her husband, Jesse England, a glass artist she met at Pilchuck. Following a cancer diagnosis, Jesse had a foot amputated.

“We had his foot cremated and then made memorials of his foot together before he passed away,” England said. She said Jesse’s death in May 2021 from peripheral nerve sheath cancer is what set her on a course for “Blown Away,” a series she had watched but never considered applying to be on.

“It’s honestly not something that I ever would have done on my own accord,” she said. “My late husband told me I had to do it. He said, ‘I think if you do it, I think you have what it takes to win.’ After he was gone, it felt like I had to do it for him.”

Minhi, whose work can be seen at minhi.com, said she doesn’t like having all eyes on her but she’s also keen to overcome uncomfortableness.

“It’s very much in my character to do something that feels uncomfortable,” she said. “My goal in going on the show was to be seen, to be able to tell my story, to be an inspiration to people who maybe have gone through very difficult things in their lives, or just need to feel like it’s OK to put yourself out there, and even if you don’t do well, it’s OK.

“I just wanted to be a beacon of hope as best I could and just be vulnerable and see what happened.”

Friday, who grew up in Ballard and Lake City, approached “Blown Away” more hesitantly. Casting producers reached out to him prior to the first two seasons but Friday declined to participate until he could see how the show portrayed glassblowing. Then he had a change of heart.

“It brings glass to a larger community,” he said, “and I felt if I can help do that, it was time to do it.”

Friday, 46, first encountered glassblowing two decades ago while meeting a friend at a Ballard glass factory. Friday decided to trade in driving a tow truck for making glass.

Later he got exposure to the art of glassblowing, attended Pilchuck and got a job at Chihuly’s studio, where he still works when he’s not making his own creations at his Fremont hot shop (FridayGlass.com).

Friday says when blindfolds were removed just before cameras rolled on “Blown Away,” he recognized seven of the 10 glassblowers in the competition.

“It was kind of like a big reunion, and the people that I didn’t know, we became fast friends,” Friday said, noting the reality TV component was the most unfamiliar element as he doesn’t own a TV. “Overall, it was a good experience and I learned a lot. It was more eye-opening to the reality TV world, I’d say.”

That included long hours of crafting and sitting for interviews. Each episode was shot over three days with little-to-no downtime between episodes.

“There’s a lot of mental exhaustion that goes into that day after day,” Friday said. “You’re not in your element. You’re living in a hotel room during COVID, which was weird at first.”

But at least there were those Seattle ties, which get an onscreen workout in an episode where England and Friday are paired in a glass art creation challenge and their shared Seattle connection becomes a talking point.

“There was some prompting there” from producers, Friday said. “But it’s definitely true that we’re good friends and from Seattle.”

Season 3 of “Blown Away” is streaming now on Netflix.