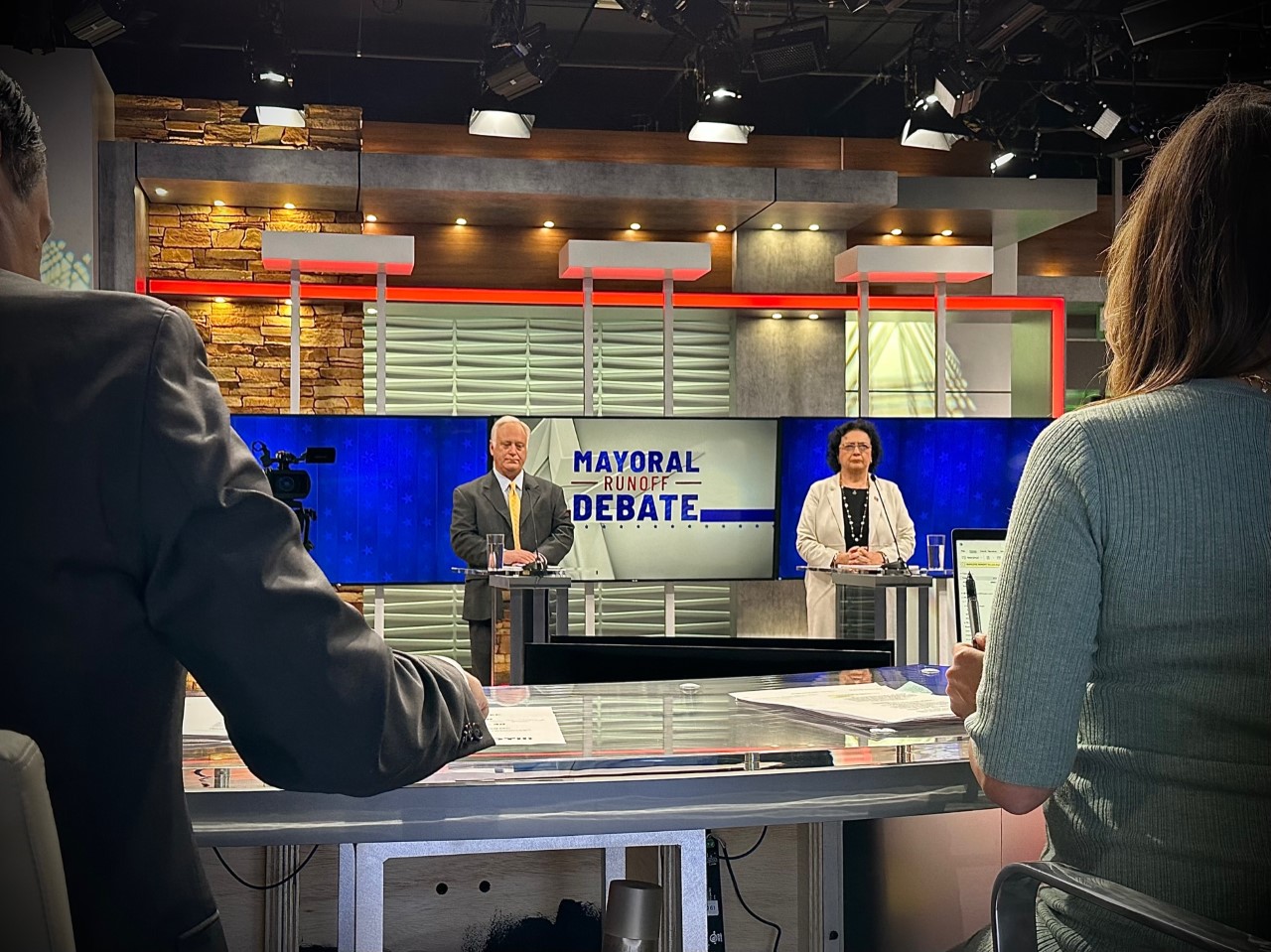 AUSTIN (KXAN) — Voters are now deciding if either Celia Israel or Kirk Watson will become the next mayor of Austin, and the two candidates who advanced to the runoff election debated Thursday evening and laid out some of the ways they differ on policy.

Here are a few of the moments from the hour-long debate hosted by KXAN that may have caught your attention:

‘Focus on the fundamentals’

Whether discussing Project Connect or solutions to homelessness or public safety, Watson kept coming back to a familiar refrain throughout the debate that he would “focus on the fundamentals,” arguing repeatedly that current city leaders are not handling basic functions well. He brought this up again toward the end of the hour when asked about broadening his base to include the city’s more conservative voters who may be key in helping to push one of the candidates over the finish line in a close runoff.

“We all know City Hall has not done a good job of taking care of the things we’ve talked about here tonight, fundamental things: crime, traffic, affordability and cost of living and housing, how we deal with the homeless,” Watson said in his closing statement. “I truly believe that it puts a lot of what we love about this city at risk. I love this city, and I love the people of this city. What I ask when I ask for your vote is that you compare the records because we need to have a mayor that can get things done and has proven that ability.”

While Watson reiterated he could help solve frustrations about the city “not taking care of basics,” one of the recurring themes of Israel’s comments Thursday night centered on her housing plan and desire to create different kinds of housing. She mentioned her intent to incentivize alternatives to single-family homes, like fourplexes and multi-family housing.

“It’s the singular reason why I’m running,” Israel said at the outset of the debate. “Austin is in a crisis right now, much of its own making. We decided back in the ’80s to cut back dramatically on the number of fourplexes and duplexes. We did that intentionally, and now it’s coming home to roost.”

‘Project Connect is a mess’

The two candidates addressed a question about how they’d handle the ballooning cost estimates and design delays for Project Connect, the public transit expansion that voters approved in 2020.

Israel said city leaders should press forward and not back off the commitment promised to the voters who overwhelmingly supported this plan.

“Every transportation dollar should be an equity dollar that brings us together,” she said. “As we are changing our land code and doing more building in the heart of the city, we’ve got to be able to make sure that we are doing right by Project Connect and that investment that the voters are trusting us with.”

Watson agreed with honoring the will of the voters, but offered a more blunt assessment about the progress being made so far.

“Let’s face it: Project Connect right now is a mess, and it needs to be addressed with immediacy,” Watson said. “It’s taking too long for us to get the answers that we need so that we can try to do what the public wants.”

Israel criticized Watson for the failure of an earlier ballot measure that would have funded a different mass transit project.

“We should have passed this referendum back in the year 2000 when Kirk was mayor, and we didn’t do it,” Israel said. “We didn’t have the political will to do it then, and we finally came through in the year 2020 to do it. Every great American city has a great transit system.”

Watson responded by saying that measure failed by less than 2,000 votes.

“I wish it had passed at that point in time because it would have been cheaper, and we would be dealing with a rail system already,” he said. “But the question was about what are we going to do with Project Connect? And what are we going to — how are we going to answer those questions? The public is frustrated because the City Hall is not taking care of basics, and we need a sense of emergency and immediacy and get these things fixed, and I want to bring that to the mayor’s office and bring my experience and the ability to get things done.”

Whoever becomes the next mayor will have to face the reality of backlash happening because city leaders pursue progressive goals in a conservative state. For instance, Texas lawmakers overrode city policies on the police budget and public camping during the last legislative session. Both candidates responded to a question about how they would work to balance Austin’s values and interests while avoiding spending time and resources fighting battles they’re likely to lose at the Texas State Capitol.

“There’s no doubt that Austin is being treated like a political piñata,” Israel responded. She said she’d be able to avoid more antagonism from escalating because of her nine years spent serving as a Texas state representative.

“I have a reputation in the Capitol as a good member — open door, open mind working with my colleagues across the aisle,” she said, “and having that legislative experience will be helpful to me.”

Watson mentioned during his previous tenure as Austin’s mayor that he often dealt with “Austin-bashing legislation” introduced at the statehouse. However, he expressed optimism that his time in the Texas Senate would come in handy again.

“If you look at my record in the Texas Senate, you will see that I have the kind of relationships that will make a difference,” he said. “I want to be clear: I will stand up for Austin’s values, and everybody at that Capitol knows I will stand up for Austin’s values because I’ve done it with them on the Senate floor. But they also know that I won’t pick unnecessary fights and create unnecessary enemies instead.”

‘Representation does mean something’

Because the debate essentially serves as a job interview for voters weighing their options in the Austin mayoral race, the two candidates had a moment Thursday to highlight what they think some of their accomplishments are.

Watson pointed to preserving more land and the city’s water supply during his time as mayor as well as establishing the Dell Medical School at the University of Texas when he worked as a state senator.

Israel, meanwhile, discussed how she could become Austin’s first Latina and openly LGBTQ mayor, saying “representation does mean something.”

“I don’t want people to vote for me because I’m Latina or because I’m a member of the LGBT community or because I’m a woman,” Israel said, “but I want them to know that I come from a working class background. That I understand. I’m proudest of the fact that I am just Celia, and I’m doing my best to serve the state that I love. Now I’m leaning in on the city that molded me in 1982.”

Early voting began Thursday for the Austin mayoral runoff election and lasts through Dec. 9. Election Day will happen on Dec. 13.