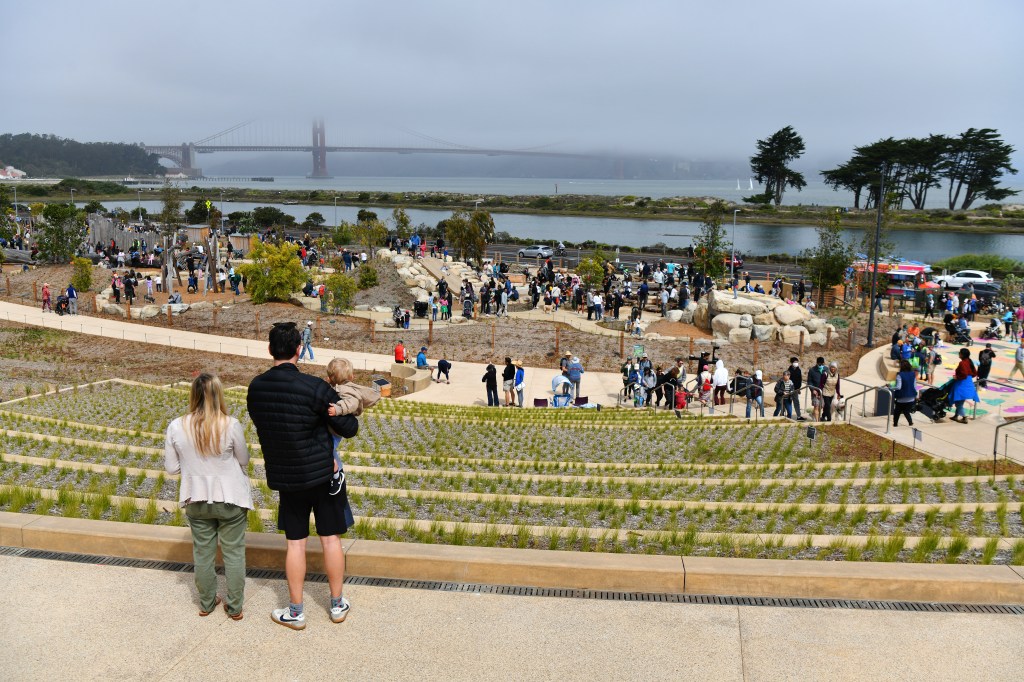 On July 17, thousands of people streamed into San Francisco to jam to live music, chug beers and wave their hands in the air.

Was this the next Woodstock? Actually, it was the unveiling of the city’s newest green space, the Presidio Tunnel Tops. Sited atop a freeway and designed by the firm that did New York’s High Line, the 14-acre park features sprawling lawns – with this stuff drought-struck Californians should know is “grass” – 100,000 plants and a nature museum where visitors literally drink the local flora.

For a park that opened only that day, revelers showed an impressive existing knowledge of it, as if they’d devoured the spec sheet in bed with a flashlight.

“You’re supposed to find three owls hidden in here,” a mother tells her daughter in line at the museum.

“All this is from the Presidio,” a man remarks to nobody in particular, looking at a play zone made from trees that had fallen within the national park site. “What I love is that it’s all-natural wood.”

The northern half of the park is shaped like an amphitheater, except instead of a stage you’re facing the spectacular IMAX of the Bay: The Golden Gate Bridge soars to the west, with its glowing comb-over of fog, and Alcatraz Island squats in the east, getting photo-bombed by cargo ships. It’s this impressive view that elevates the site to a world-class destination, according to Michael Boland, chief park officer at the Presidio Trust.

“It reminds you of how beautiful the Bay Area is,” he says. “Every day is different on the Tunnel Tops – it’s foggy, it’s sunny, it’s stormy. I’ve stood up there and watched whales breach in the Bay, flocks of pelicans fly by. It’s just an extraordinary place, and the beautiful thing is, it’s free to everyone.”

The park has been in the works for some time, with millions of dollars donated by local benefactors. Almost a decade ago, Boland sent letters to 100 design firms around the world.

“We hired five firms originally. They developed concepts and we tested them with the public, which liked the scheme that (James Corner Field Operations) proposed the best. We ended up hiring them and the rest is history.”

“When we first visited the Presidio, nearly eight years ago, we noticed that all around was a powerful sense of the natural world, remarkable for its stunning beauty yet so close to downtown. Urban but also wholly natural and sublime,” says Richard Kennedy, senior principal at the architecture/urban-planning firm.

“Working in this incredible setting within the national park, it was important to not detract from or overwhelm the view. We designed with great care and restraint, so visitors find joy and delight in experiencing the 360-degree horizon. We choreographed each pathway, furnishing and feature, so that every perch feels like it’s the absolute best place to view the bridge and Bay.”

Visiting the park is a fine way to spend an hour; there’s even a free shuttle that stops at the Embarcadero BART. But given all the fun stuff to do in the Presidio, you could make it into an entire day trip. Here’s a quick guide on how to spend your time adventuring in and around the Tunnel Tops.

Take an architect’s tour of the park

Sprawling meadows ideal for lounging – you hardly need a blanket, the grass is so soft – are ringed with paths with sightlines of the Bay. Kennedy recommends the Cliff Walk with its water views. “It is the promenade to see it all,” he says. “There are a series of sculpted, oversized seating benches that resemble massive-scaled driftwood, as if ancient, huge redwoods sat in water and sun for years to assume a beautiful-but-solid fossilized form… People can sit, stand, lounge, lie, huddle and gather on these great pieces of landscape furniture oriented to magniﬁcent views and the drama of changing weather and scene.”

The paths sometimes lead you to unexpected places, like a Veterans Overlook where you watch traffic on Highway 1 zoom below your feet. And behind the visitor’s center is the Campfire Circle, with gas flames licking from stones to keep visitors toasty in the ocean wind. On some days, rangers hunker down here and tell stories about the Presidio. Considering the campfire is large enough to cook a spitted hog, maybe they’ll consider doing barbecues soon.

At the Field Station, sort of a mini-Exploratorium for nature, visitors are met with a Sense of the Day exhibit where they might sample fragrant sprigs of fennel and California sage (used by indigenous people for toothaches). A surprising version of an office water cooler offers the daring a Taste of the Presidio – water infused with local plants like minty Yerba buena and rose geranium. There’s also a taxidermied alpha female coyote, the first to be radio-tagged in the park, that children can stroke like a friendly doggie.

The Outpost is a huge play zone with a wild feel that echoes the surrounding parkland. While parents might not want their offspring monkey-shimmying up a real tree, here they can try out a climbing wall made from trees that fell over in the Presidio. There’s a womblike structure inspired by local bird nests great for summiting and, perhaps most impressively, a massive tree trunk lying on the ground with a hollow interior ripe for exploring.

Dine at a new food-truck park

The Tunnel Tops has wheelchair-accessible picnic tables and grills shaded by pine trees. It’s also home to a daily food-truck operation, the Presidio Pop Up, with a rotating lineup of about 30 vendors slinging everything from empanadas to Indian snacks, plant-based soul food, doughnuts, coffee or cocktails. Or you could keep it classic at one of the Presidio’s embedded restaurants – there’s Colibri Mexican Bistro at the Officers’ Club and Sessions, where diners soak in the sun outdoors while enjoying oysters and Prosecco.

Just north of the park is the beachy area stretching along Crissy Field. Here you’ll encounter scores of happy pups taking their owners for walks or trying to tunnel through the sand to China. There’s a shallow tidal lagoon to get the feet wet and observe shore birds. And there’s nothing wrong with plopping like a spent jellyfish on the sand and relaxing in the salt air. It’s a good place to observe the faddish sport of wing surfing, with practitioners racing on the waves or eating face and flopping like sad butterflies in a puddle.

For as long as San Francisco has existed, locals have fretted about interlopers slipping in through the Golden Gate, whether it be the Confederate navy or German U-boats. Fort Point was built during the mid-1800s to guard the narrows against such an attack. Thankfully it never had to launch a shot, and today it serves as a cool historical structure to explore. It’s about a 30-minute walk from the Tunnel Tops, but worth the trip to admire its impressive military architecture and stunning views of the Pacific (and the iron underbelly of the Golden Gate Bridge).

Take a selfie with Yoda

At the headquarters of Lucasfilm in the Presidio is a statue of Yoda propped on a fountain like a wrinkly, anthropomorphic squash. The Yoda is (some might say) underwhelmingly life-sized – you get the feeling he was always talking to peoples’ knees in the movies – but that doesn’t stop hordes from coming to pay tribute. People range from casual Star Wars enthusiasts to globe-trotting fans intent on checking off every filming and memorabilia site, from the deserts of Tunisia (Tatooine) to the redwood forests up California’s coast (Endor). Take a couple minutes to chill in Yoda’s little garden, where visitors often report obtaining a sense of peace and fulfillment.

What it was like to shelter at Disney through Hurricane Ian