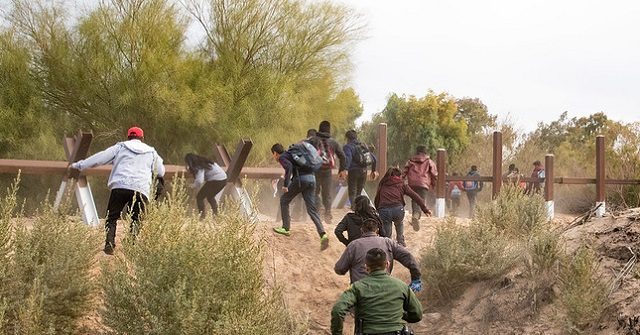 U.S. Border Patrol officials estimate that 72,000 migrants got away without being apprehended after they illegally crossed the U.S.-Mexico Border, according to a source operating under the umbrella of U.S. Customs and Border Protection. This adds to the 140,000 estimated got-aways during the first two months of the new fiscal year bringing the total to approximately 212,000.

The source told Breitbart Texas that approximately 72,000 migrants are classified as got-aways during the month of December. The El Paso Sector alone accounted for approximately 32,000 of these got-aways. Agents in the El Paso Sector apprehended nearly 56,000 migrants in December. This brings the total of known border crossings to 88,000 for the month.

Gotaways are an estimate by Border Patrol officials of migrants that are either seen and not apprehended or are counted by other means including technology and tracking. These are migrants who illegally cross the border with no intention of surrendering to law enforcement to claim asylum, officials previously told Breitbart.

During the first two months of the new fiscal year, which began on October 1, 2022, Border Patrol officials estimated 140,000 migrants got away without being apprehended, Breitbart Texas reported. December’s 72,000 brings the estimated got-aways total to approximately 212,000.

Bob Price serves as associate editor and senior news contributor for the Breitbart Texas-Border team. He is an original member of the Breitbart Texas team. Price is a regular panelist on Fox 26 Houston’s What’s Your Point? Sunday-morning talk show. Follow him on Twitter @BobPriceBBTX.

Number of people and businesses going financially insolvent jumped in 2022