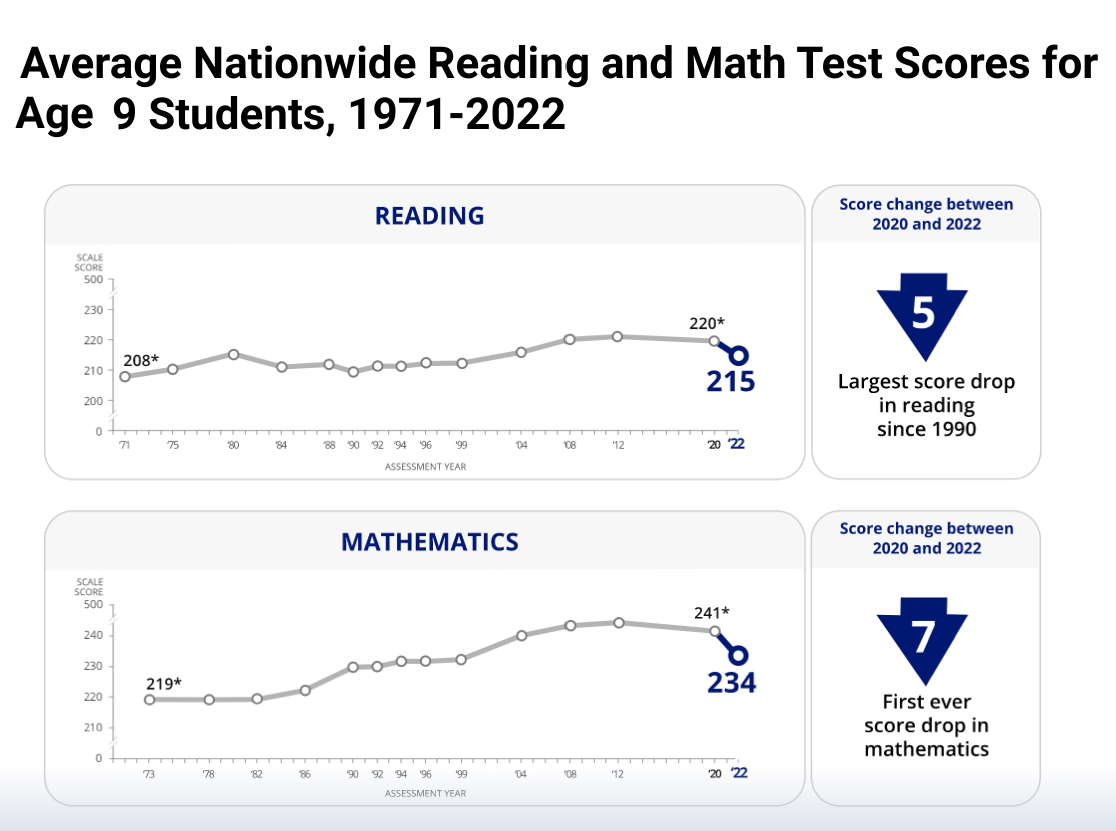 A report released by the U.S. Department of Education showed that declines as a result of the pandemic erased two decades of test score growth.

The data in the report is from the National Assessment of Educational Progress (NAEP), run by the Department of Education. They sample 7,500 kids taking the same tests that have been given since the 1970s, so they’re able to track long-term trends like these, explained Emily Oster, a professor of economics at Brown University who writes a newsletter called ParentData.

“The data they’ve released so far doesn’t allow for a lot of breakdown by, say, remote schooling; it does a little bit by socioeconomic group, which I think is consistent with what we already know, which is that some groups have lost more than others. It also doesn’t give us a sense of recovery because the data is [so new],” Oster said. “What we take away is that there are large declines.”

Oster said that the NAEP report is corroborated by state test score data and data from NWEA, an education nonprofit that runs assessment testing for districts around the country.

“One of the nice things about the assessment that they run is that they can look at growth because they have the same kids over time,” Oster said. “And they’re seeing a very similar set of patterns to what we did in NAEP data, which is that there are large test score declines.”

Oster added that the NWEA data also highlights disparities within the overall decline.

“Students who are in less well-off school districts and students of color have larger test score declines than those in richer districts,” she said.

She said that roughly a third of test score losses were recovered over the 2021-2022 school year, but it’s unclear what is to come.

“There’s a question of do we get back a third, and then next year, we get about another third, and so then we’re in a three-year recovery plan? Or next year, do we get a relatively smaller amount? Are these cohorts of students stagnated at a lower level?” Oster said.

Oster also noted that it’s already visible that some places are recovering better than others. And beyond the immediate impact, she said it’s hard to know what the lasting impacts of the pandemic will be on students. Will the test scores rise back to normal levels eventually, or will these kids always be behind as a result of COVID-19? Though long-term effects are hard to predict at this point, Oster said it’s hard to imagine they won’t exist in any capacity.

“Most of the literature we have from other disruptions would say, yes, there can be some effects of those things for the long term, but exactly how large and in exactly what way, it’s just too hard to say,” she said.

Stay up to date on all the latest news from Boston.com

‘We’re with you,’ Biden tells Puerto Rico ahead of visit