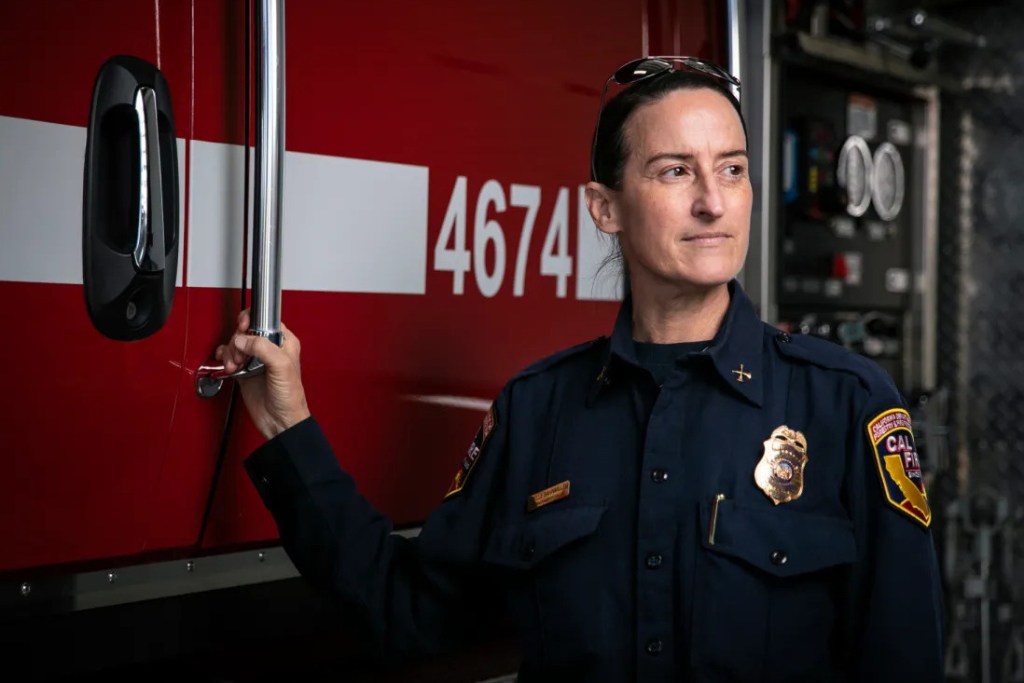 Even after she left that fire, it never left her.

Back in the station, and at home, she grappled with recurring nightmares and troubling, intrusive thoughts. Whenever she saw trees, she hallucinated that flames were shooting out of them.

For four months, she was all but sleepless and throwing up every day, turning into a semi-functioning zombie. Bahnmiller developed an irrational belief that if she went to sleep her fire crew would die. Sleep was not a relief, but a portal to something worse. She was unable — then unwilling — to sleep, lest nightmares engulf her.

The Lodge fire wasn’t just on her mind, it utterly occupied her mind. It set her on a path so dark that she eventually considered suicide.

“I was very preoccupied with the fire, but at the same time I was trying to shove it away,” she said. “It felt very acute to me, especially when I would try to rest. These pictures would come rushing into my mind.”

Experts say her experience is a common example of trauma that leads to post-traumatic stress disorder and suicides among wildland firefighters: Like many, she suffered no physical injury but she battled an out-of-control fire, magnifying the sense of helplessness and anxiety that firefighters find particularly stressful.

Bahnmiller was raised to not give in to pain or fear, or even acknowledge it. Her father was a naval officer attached to a Marine Corps unit at Camp Pendleton. Stoicism, service and success were all family bywords, part of what she calls her “Dad-mythology.”

When she hit 30, she spent months riding her motorcycle around the country. After witnessing a pregnant woman roll her car in Maine and wishing she had the training to help her, Bahnmiller thought it was about time that she devoted herself to serving the public.

She became certified as a paramedic and worked for a private ambulance company and in a hospital trauma ward. She entered Cal Fire’s basic academy and was a rapidly rising star, graduating second in her class from the officer academy. She’s now a battalion chief.

Women make up only 6% of Cal Fire’s firefighting corps.

Now 54, Bahnmiller often talks about resilience: Like when you’re facing your worst demons, when you fear you’ll never recover your balance, you somehow find a way to stand again. Like when steel becomes stronger after it passes through fire.

“I thought I had to fix this because firefighters solve problems. We don’t have problems that we can’t fix,” she said. “I didn’t tell anybody that I was having this constant feeling like I was still standing on top of that ridge, watching the crown fire burn those people, and not being able to stop it.

But Bahnmiller hid her pain from her boyfriend, a federal firefighter who is now her husband, who remembers her acting outwardly normal after the Lodge fire and during the months afterward. She hid it from her friends and colleagues, too, suffering in silence and isolating herself as much as she could.

“Even though I had a wonderful life at the time, I became secretly suicidal because I couldn’t make it stop,” Bahnmiller said. I had this feeling of powerlessness. They train us to be in charge. To be decisive. Take action.

“I decided at some point, the only way to fix it was to kill myself. I became obsessed with this idea that to make these pictures stop, I just had to go away.”

Four months after the Lodge fire, Cal Fire peer support officer Steve Diaz was in Bahnmiller’s station, following up on phone conversations they were having about someone she thought needed counseling.

His job was to explain the agency’s support services, which are voluntary and confidential. But to Bahnmiller’s surprise, he spoke directly to her and said, “Call this number if you ever need help.”

Bahnmiller’s life was unraveling. She isolated herself and stopped meeting friends for coffee. She began to load up on work, taking all the overtime offered.

One day, months after the fire, a longtime colleague said, “What’s going on with you? You are not yourself.” She told him only that she had not been sleeping.

She left work intending to shoot herself, too. “I was driving to my boyfriend’s house to kill myself,” she says. “I felt trapped. I didn’t know there were other ways out. I decided the only way to fix it was to kill myself.”

Instead, for reasons she still doesn’t understand, Bahnmiller pulled over, reached into her uniform pocket, dug out the helpline number, and called.

Bahnmiller agreed to attend a “trauma camp” for a week of intensive therapy.

The camp, in Napa County, is operated by therapists with extensive experience in the trauma inherent in high-risk professions such as firefighting and policing. Cal Fire pays for the program.

The clinicians diagnosed Bahnmiller with acute post-traumatic stress. She attended group and individual therapy, yoga, and meditation classes, and learned calming breathing techniques. A clinician also guided her through a realistic reenactment of a traumatic event as a way to reprogram how her mind processes trauma.

This combination of approaches can have a powerful therapeutic effect. “It was like a shedding. I left completely altered. I felt free. I wasn’t frozen on that ridgetop. It gave me my life back,” she said.

She eventually opened up to her husband, who was shocked by the severity of her depression and pain.

Businesses are in a rush for tax clearance certificates as…