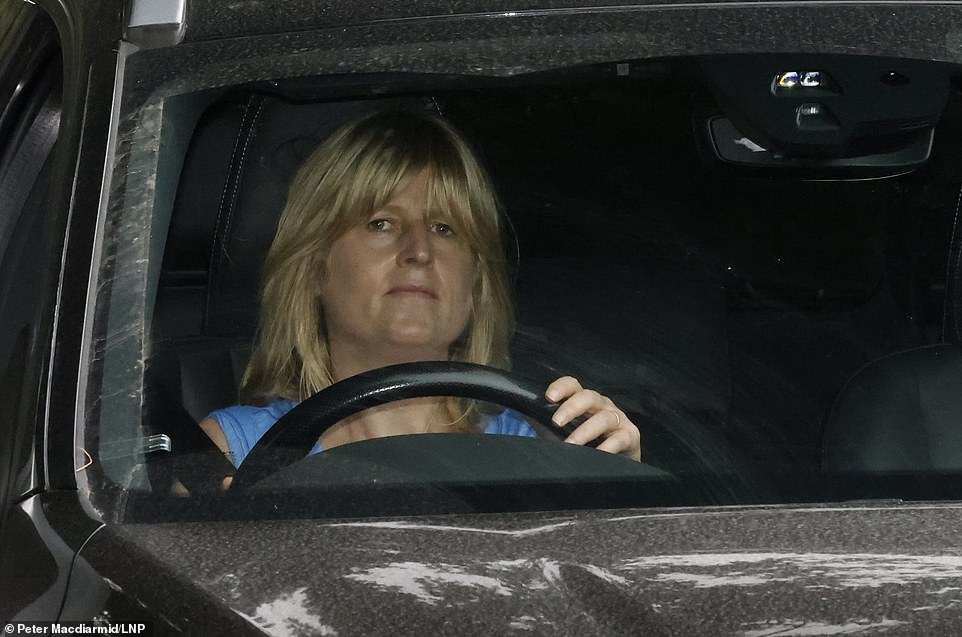 Boris Johnson’s close allies and family members have all been pictured arriving at the picturesque Cotswold venue where the thrice-wed Prime Minister and his wife are set to celebrate their nuptial.

The Tory leader’s sister Rachel, their 81-year-old father Stanley and Minister for Brexit Opportunities Jacob Rees-Mogg have all reported in for Mr Johnson’s lavish party at the Grade I listed Daylesford House, Gloucestershire.

Friends and family will all join together in celebrating the marriage of Mr Johnson and his wife, Carrie, in the picturesque property that sits within 1,500 acres and boasts stunning amenities including a heart-shaped orchard, painstakingly manicured gardens, an 18th century orangery and a luxurious pool.

Around 200 guests, including a dozen or so Conservative MPs, had started gathering at the idyllic mansion, owned by JCB founder and Tory megadonor Lord Bamford, for drinks from 5.30pm.

Those in attendance will be able to relax on hay bales and benches placed outside the marquee and eat and drink at casks and small tables as they enjoy views across vast meadows and orchards.

Anti-Brexit protestor Steve Bray, who turned up to demonstrate with a ‘Corrupt Tory Government’ sign outside the venue that will host the Prime Minister’s celebration, was moved on by police officers early on Saturday afternoon.

Boris and Carrie secretly married last year in front of just 30 guests at a church in Westminster during the Covid pandemic. It’s thought they had hoped to celebrate their special day in style for some time, with a succession of political crises forcing repeated postponements. 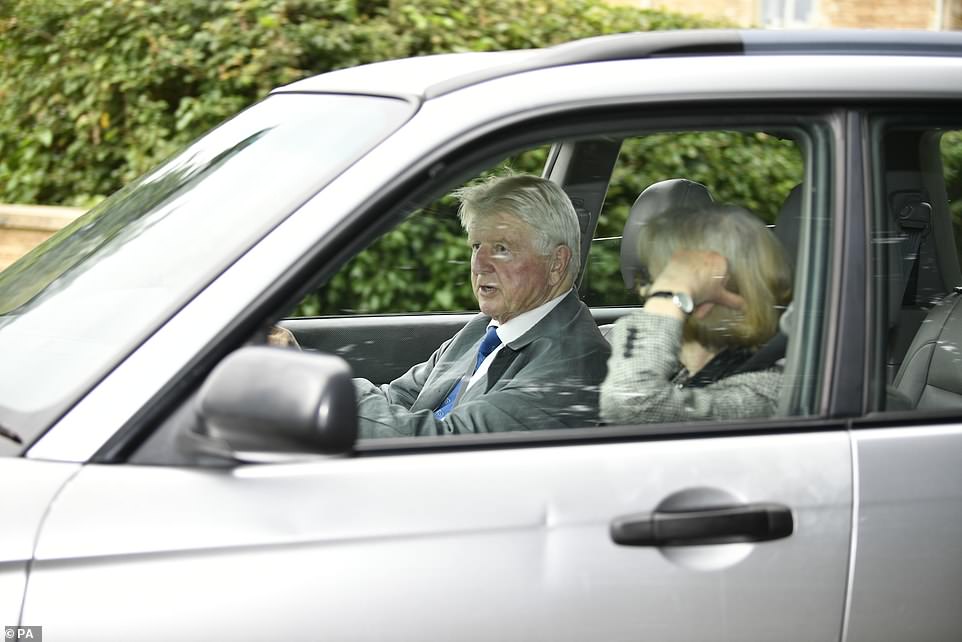 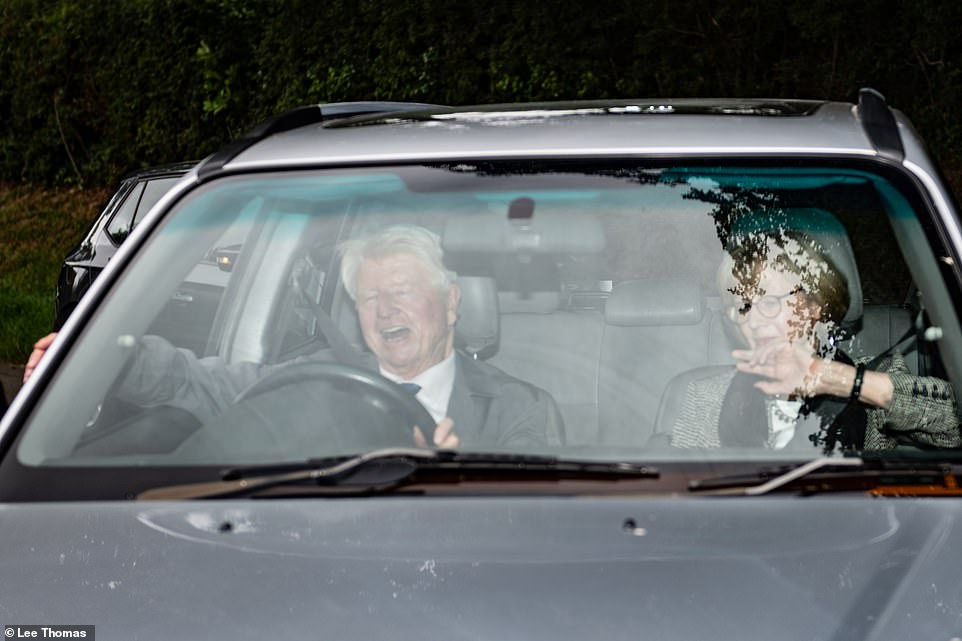 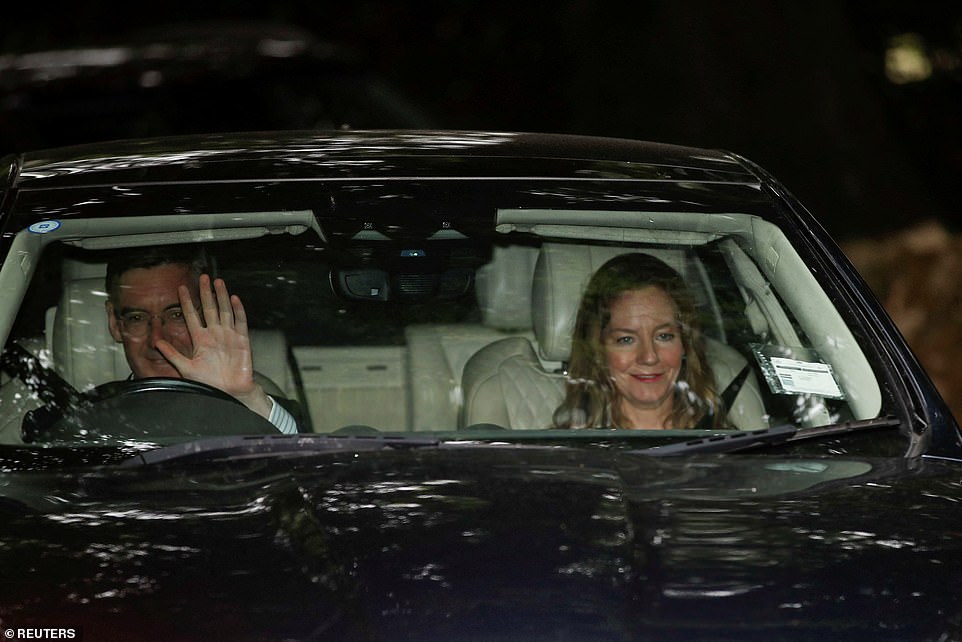 Jacob Rees-Mogg, a key member of his cabinet was also seen arriving at Boris’ anniversary party on Saturday 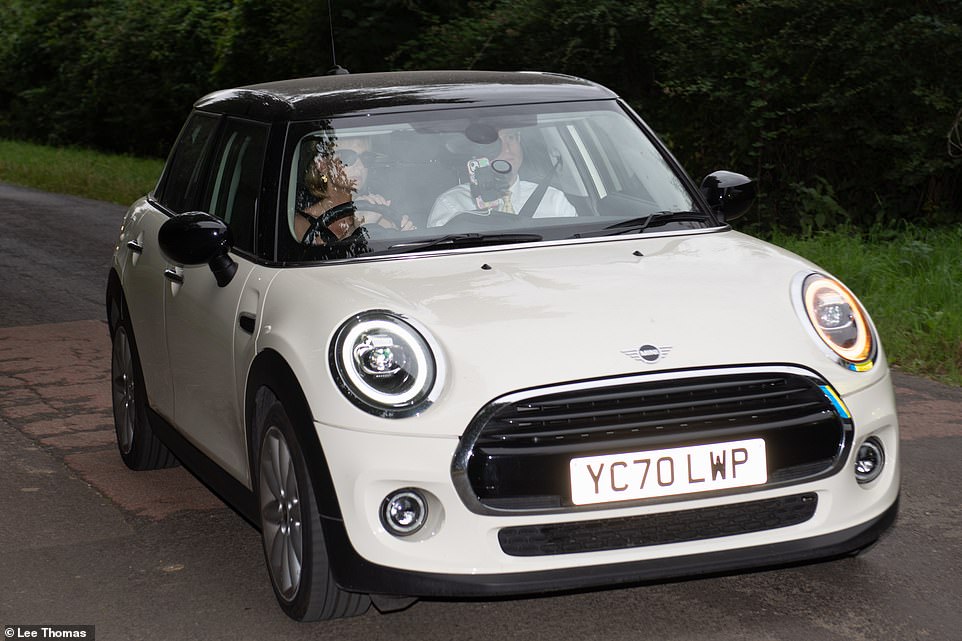 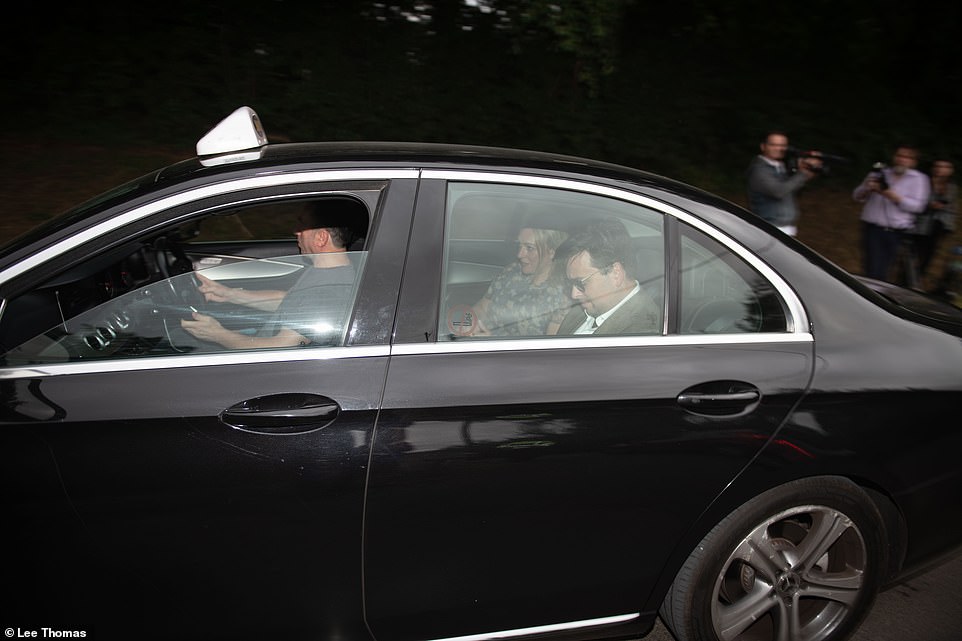 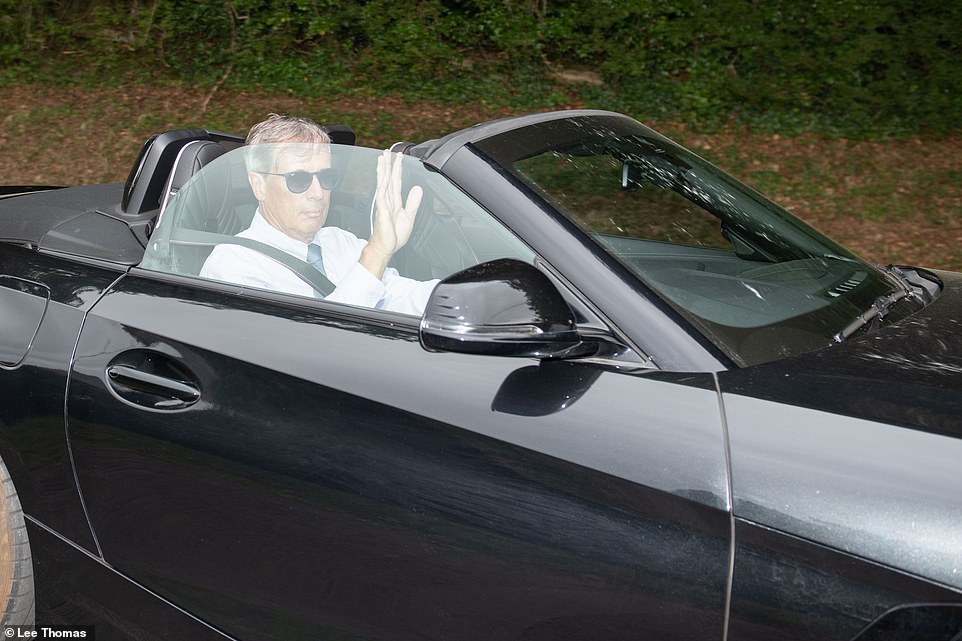 Lord Zac Goldsmith, a great defender of the couple and a Tory strategist on the environment – a passion for Mrs Johnson, is also attending tonight’s party 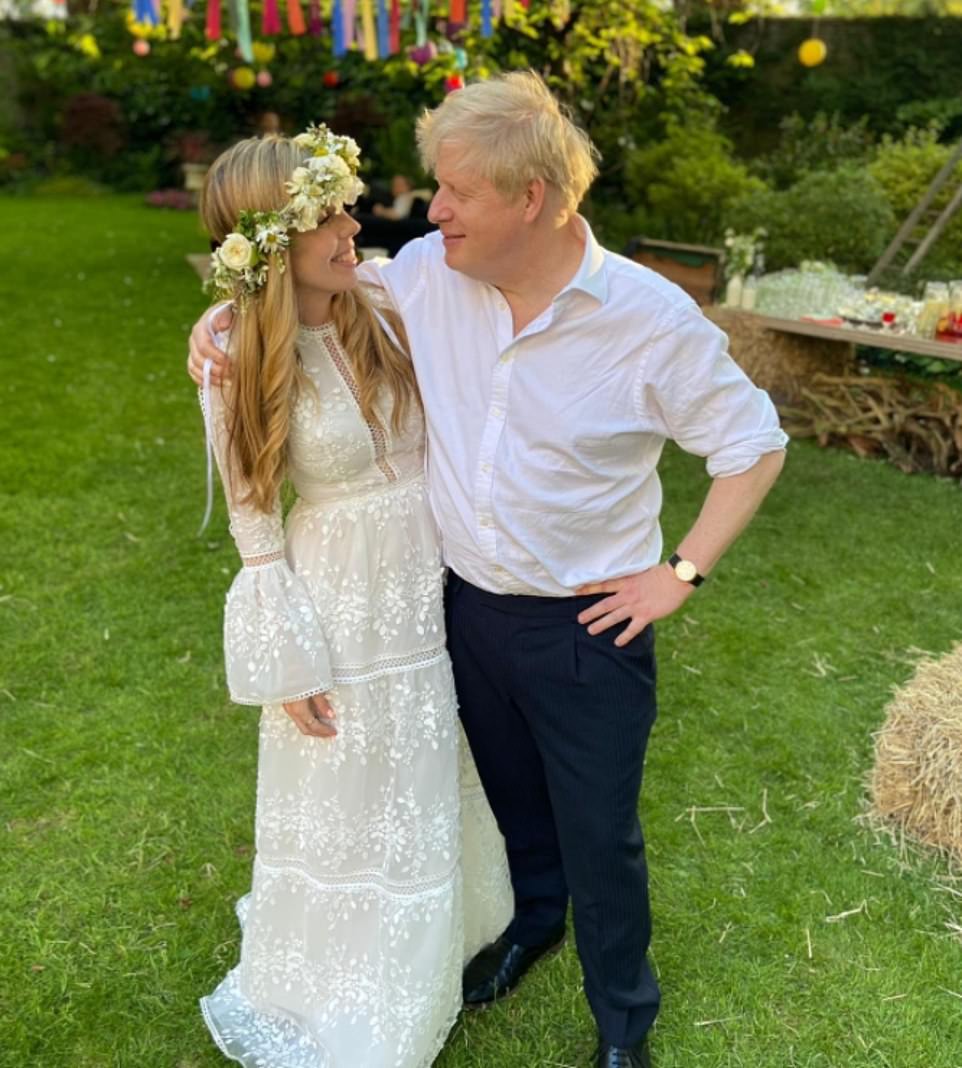 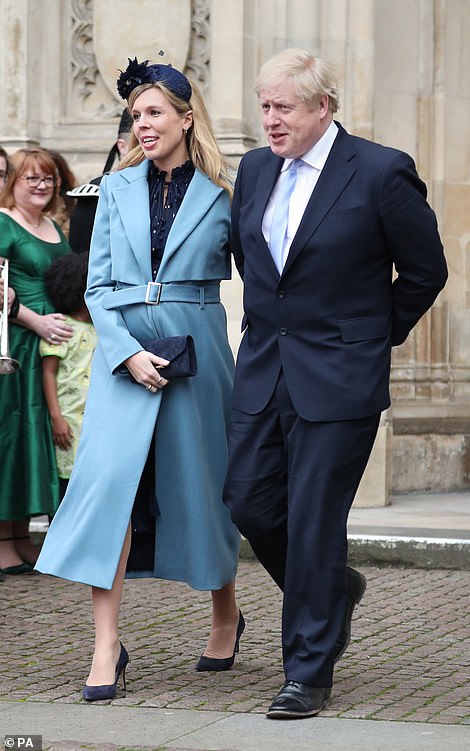 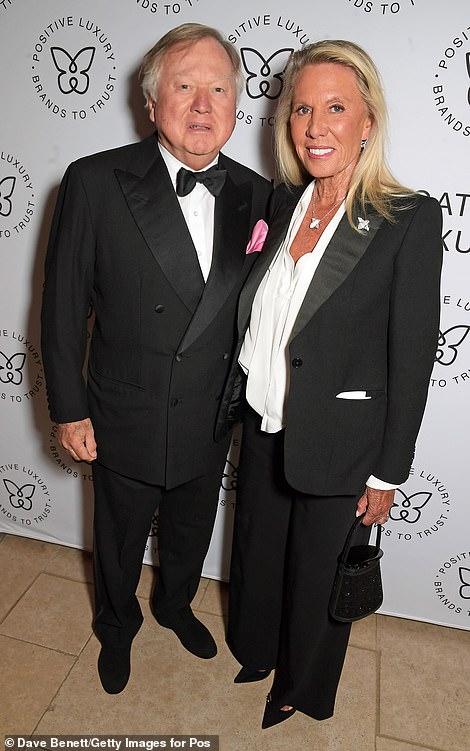 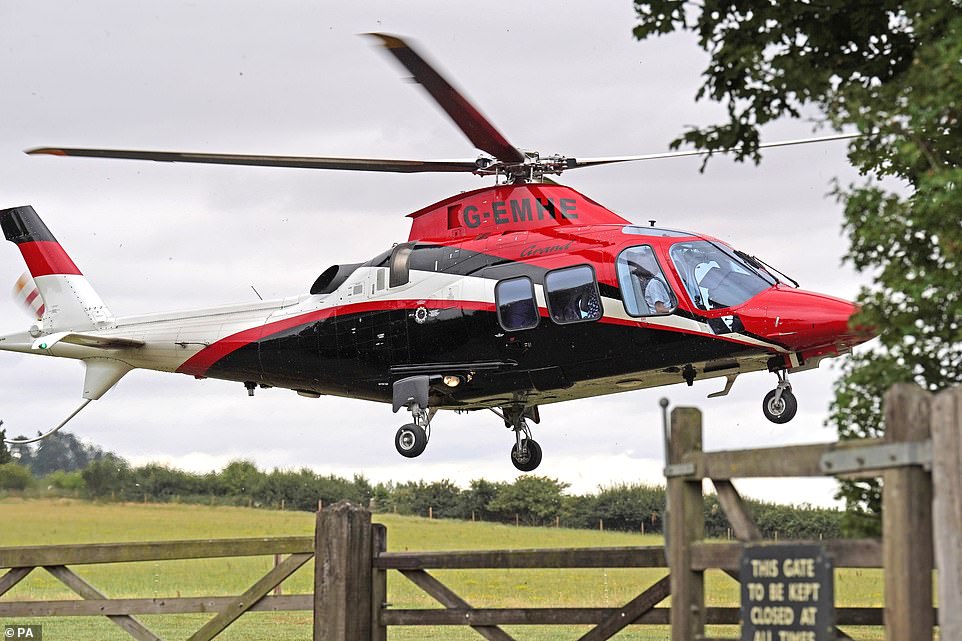 A private helicopter arrives at Daylesford House, Gloucs ahead of Boris and Carrie’s wedding party 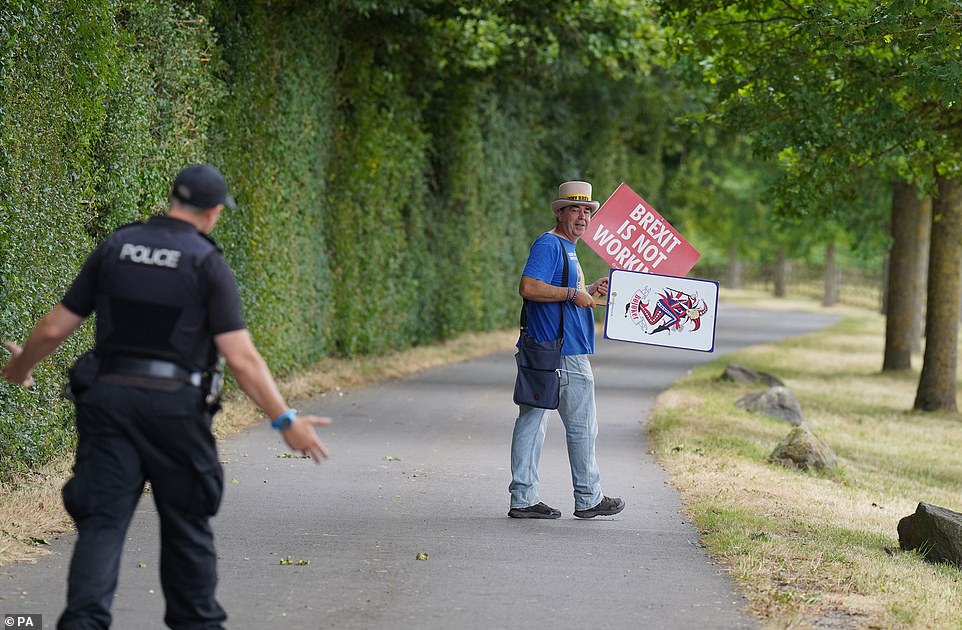 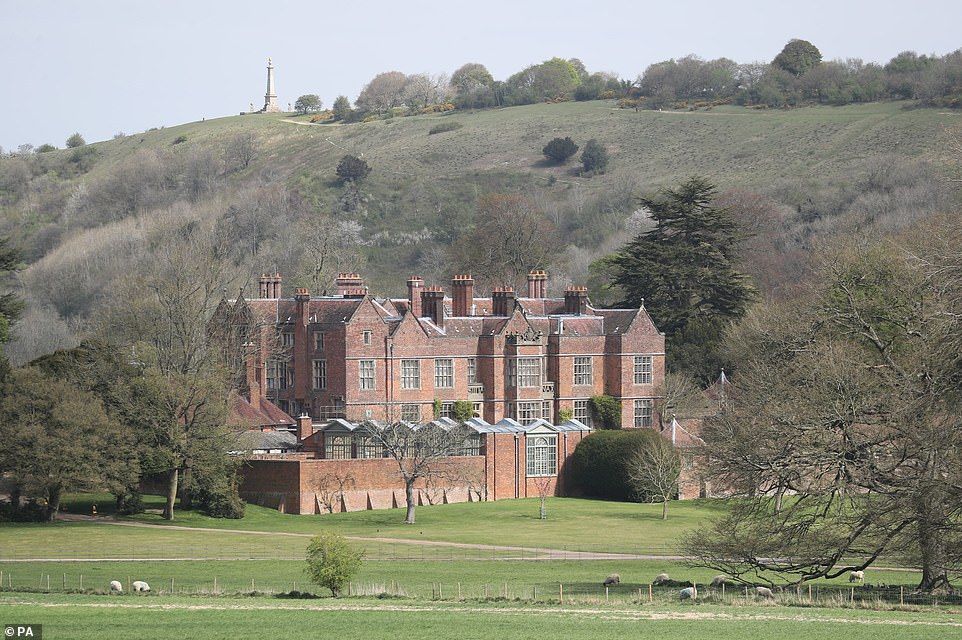 Sources had claimed the event was initially going to be held at Chequers (above), but No 10 sources confirmed it would be elsewhere 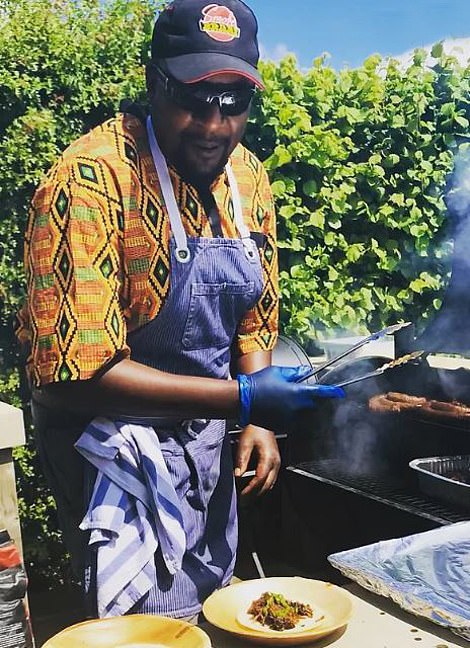 Insiders have claimed that the coup that forced the PM to resign has had an impact on who would be among the 200 guests – with Michael Gove, who was sacked for telling his old friend to go, said to be among those who have been culled.

There is also a doubt over Sajid Javid’s invite after he plunged the knife by resigning as Health Secretary earlier this month.

Mr Javid was part of Carrie’s inner-circle and a close friend having previously been her boss and was part of the select group of Tory MPs who attended her 30th birthday party where Mr Gove performed a rap that healed a rift with Boris when he sank his leadership campaign after their Brexit win in 2016.

His former chancellor Rishi Sunak and current Foreign Secretary Liz Truss are both sure to miss the party as they are on the campaign trail in a bid to replace the outgoing Prime Minister.

Carrie’s best friend Nimco Ali, an activist who has campaigned to end female genital mutilation, is sure to have a key role in the day given she is so close to the couple and is even said to have formed part of their household bubble during the pandemic.

Henry Newman, known as the leader of the ‘Carrie clique’ in Downing Street, is also likely to be there as will former Gove aide Josh Grimstone. But most advisors will not go.

Green Tory Lord Zac Goldsmith, a great defender of the couple and a Tory strategist on the environment – a passion for Mrs Johnson, is also going, according to The Daily Telegraph. ‘Turbocharged Remainer’ and Old Etonian Hugo Dixon, one of Boris’ oldest friends is also expected to be there.

Guests at Boris and Carrie Johnson’s wedding party are set to dine in style on South African street food at the Cotswolds retreat of Tory mega-donor Lord Bamford today.

At least three street food outlets were pictured arriving at the gorgeous countryside manor house on Friday afternoon, with helicopters heard amassing above.

Daylesford House is the 18th-century home of Lord Bamford, 76, the founder of construction giant JCB and one of the Conservative party’s most prolific donors.

The billionaire Bamfords, who gave £4million to the party in the run-up to the 2019 general election, after handing £100,000 to the Vote Leave campaign, stepped in to fill hosting duties after furore surrounded the Johnsons’ prior plans to hold their wedding party at Chequers. 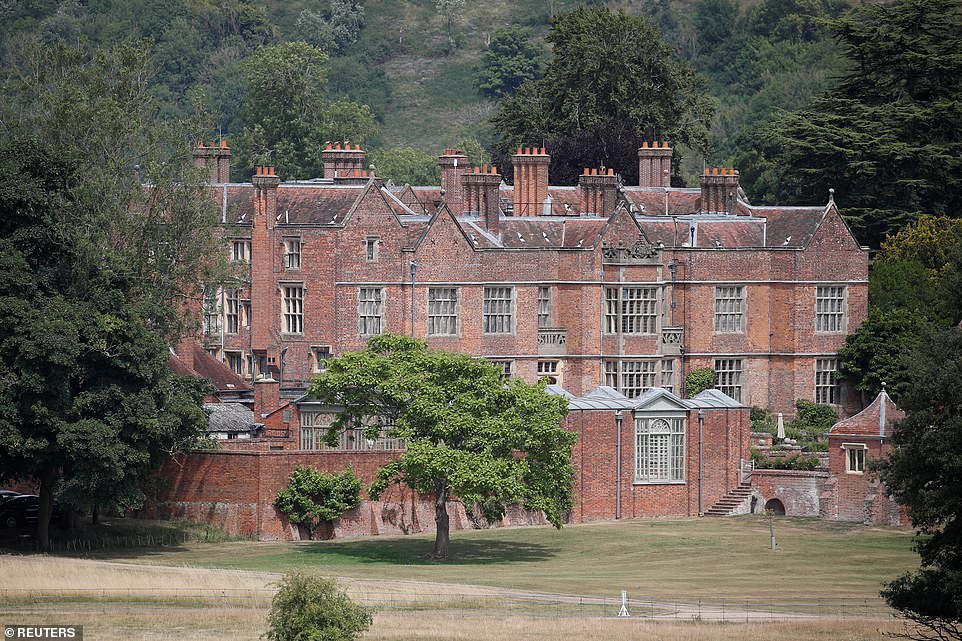 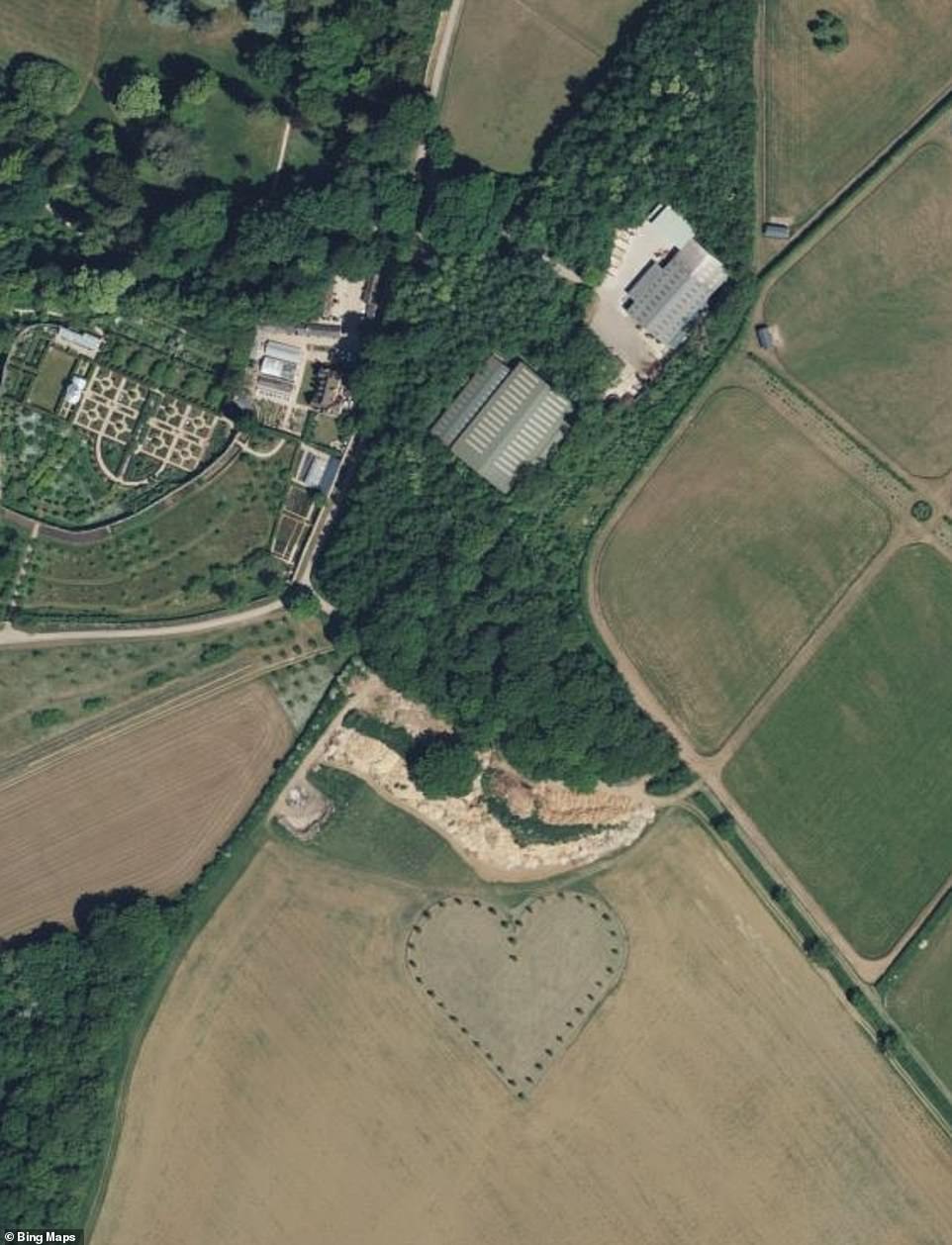 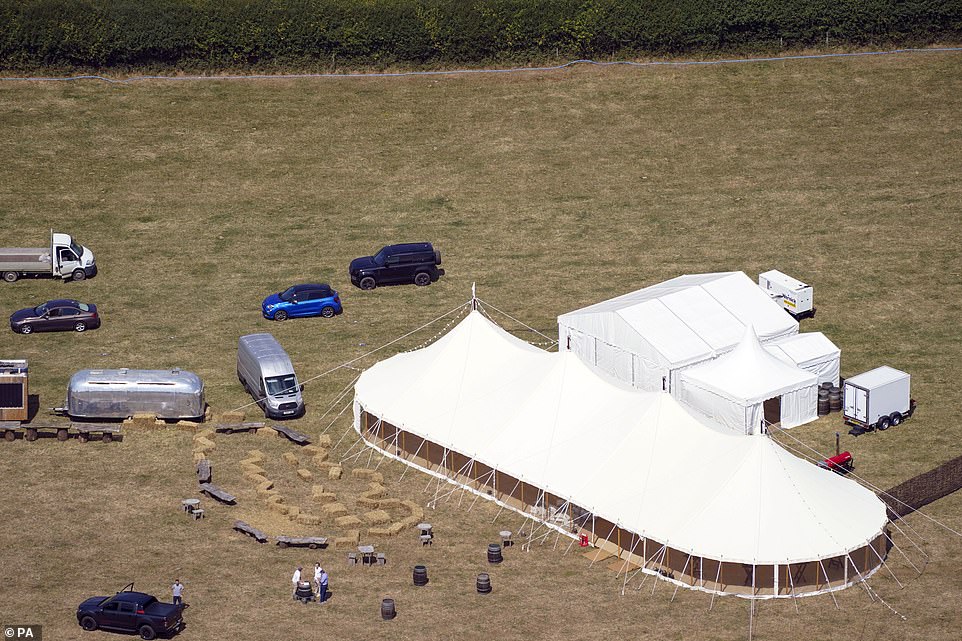 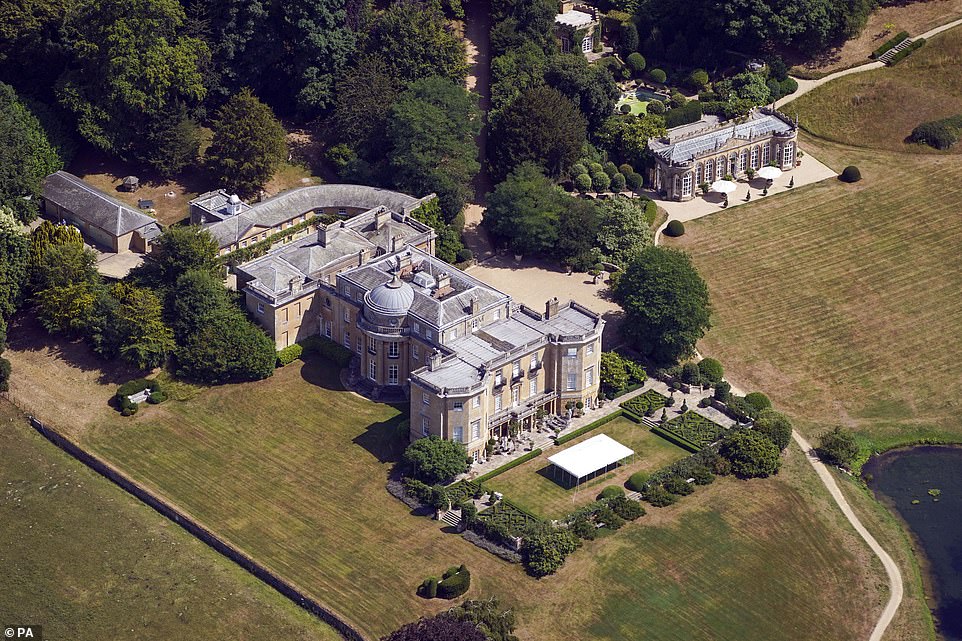 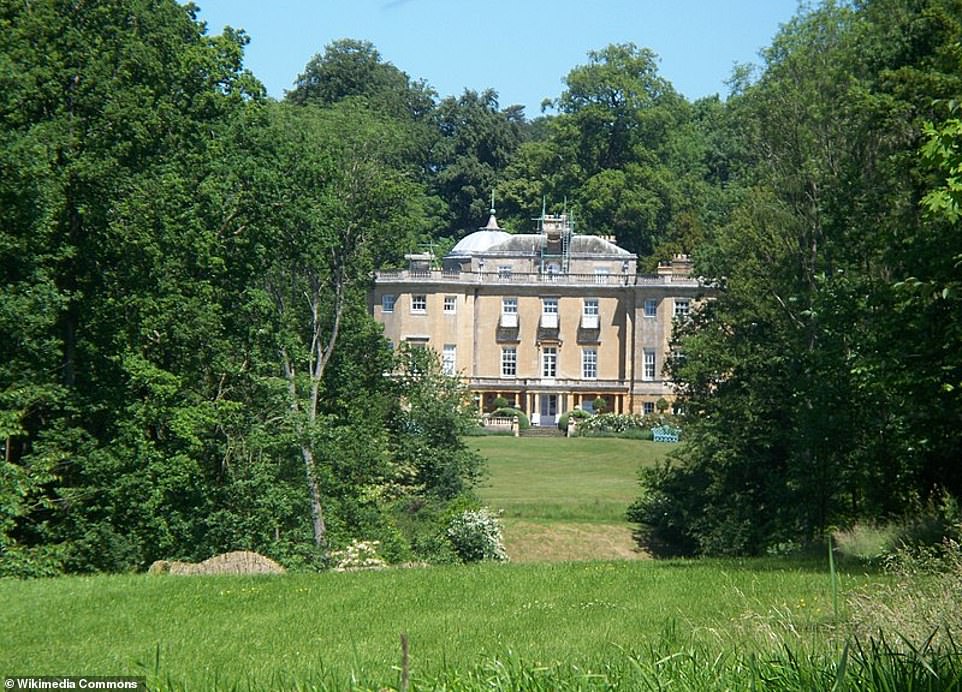 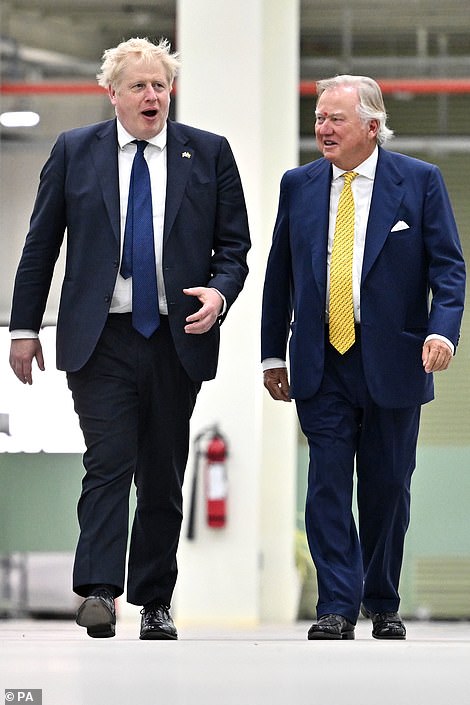 Johnson with Lord Bamford (right), chairman of JCB, at a new JCB factory in Vadodara, Gujarat in April this year

The PM and his wife had planned to toast their marriage with a party at Chequers, the Prime Minister’s grace-and-favour country home in the Chilterns.

But they were forced to change their plans following Mr Johnson’s resignation and the billionaire Bamfords stepped in.

The couple tied the knot in a secret ceremony at Westminster Cathedral in front of just a handful of guests in May 2021.

The 30 guests were invited at the last minute, with only a few church officials involved in the preparations for the service

Lord Bamford, 76, is one of Britain’s most successful industrialists and his fortune has been estimated at £4.6billion.

His wife, Lady Carole Bamford OBE, became famous for launching Daylesford Organic Farm, based in the private village but with farm shops across London.

Daylesford House, which is just a mile from Lord and Lady Bamford’s organic farm of the same name, boasts 1,500 acres of manicured gardens including pristine lawns, an 18th-century orangery and a secret garden – complete with octagonal swimming pool, shell grotto and alfresco pizza oven.

The news follows the installation earlier this week of a giant marquee at the 1,500-acre site, with a giant heart etched in the surrounding grounds.

Downing Street has refused to comment on the occasion, stating it does not discuss private events which do not involve taxpayer funds or ministerial declarations.

Boris Johnson made his headline-grabbing Brexit stunt at the factory as part of his general election bid in 2019.

The global digger manufacturer paid him £10,000 just three days before he smashed through a brick wall in a JCB digger.

Beyond politics, the Bamfords hold sway with a long list of British elites, including their friends the Prince of Wales and Duchess of Cornwall.

Lady Bamford, whose precise age is unknown, sits on JCB’s board of directors and was awarded in OBE in 2006 for services to children and families.

They have four children and a haul of houses around the world in addition to a prolific car collection worth tens of millions of pounds.