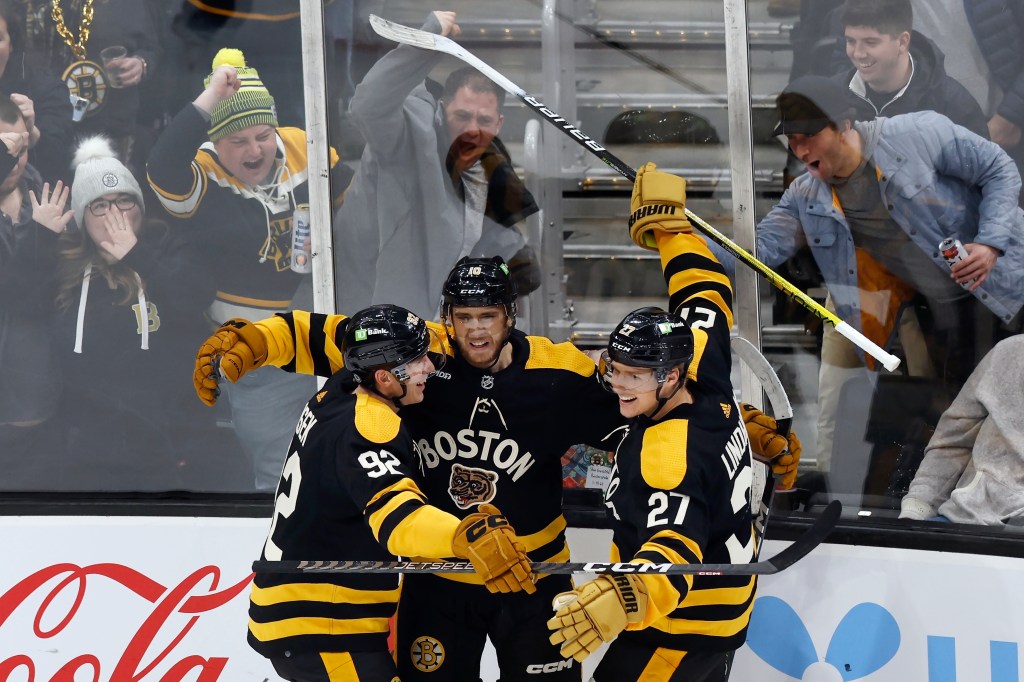 A.J. Greer was about five inches off from providing one heck of a highlight reel goal in the Bruins’ 6-0 shellacking of the Philadelphia Flyers on Monday.

With the B’s cruising to victory, Greer was receiving a pass just outside the Boston blue line as Flyer defenseman Travis Sanheim was closing on him. Greer first tried to chip it by Sanheim, but when it popped in the air, he gave it a backhand swat and – voila! – he had created a 2-on-1 for Tomas Nosek and himself. When he got the return pass from Nosek, Greer had a chance to finish it off but he just missed the space over Samuel Ersson’s blocker.

While the play didn’t result in a goal, it was indicative of a player, who had been in and out of the lineup, regaining his confidence. Feeding that confidence was, of course, his big goal in the B’s 4-3 win over the the Maple Leafs on Saturday. It was his first goal since Oct. 18 and first point since Nov. 19.

“One hundred percent,” said Greer on Tuesday after practice. “You could tell the last two games I’ve been confident with the puck and my decisions and everything. I think that’s just a matter of taking a step back, taking a look at the big picture and just re-setting. I went a lot of games without a point and not many offensive looks and once you get in that groove, it’s tough to get out of, because you start doubting yourself and you’re chasing it so much when it’s just better to wait for it and let it come to you and play the right way. And I think I’ve been playing the right way, but once you don’t get the offensive looks that you want, you’re looking for it and you’re thinking about it way too much and it doesn’t happen. I think I’ve just been refocusing and just enjoying it.”

Greer was the success story of training camp. Signed to a two-year, one-way deal in the summer, the former Boston University player and Montreal native earned a roster spot with physicality and timely offense in his preseason games.

The start of the regular season didn’t end the production. He had 3-1-4 totals in his first four games as a Bruin. But eventually, that dried up and the 26-year-old Greer began living the life of a guy still trying to establish himself as an NHL player – sitting out two games here, three games there. The next thing he knew, he hadn’t scored a goal in three months.

But he snapped out of it at the right time against the Leafs, and that play carried over against Philly.

“He’s been playing a lot more confidently,” said coach Jim Montgomery. “He’s making good hits, he’s on top of pucks, he’s using his feet to get in behind defensemen and making high-end offensive chances. He’s doing a lot of good things. And, hey, we’re playing good hockey again. The last two games I think we’re back to playing Bruins hockey like we were for a long time. And I think it’s hard to take anyone out of the lineup. It just is.”

In his time with Avalanche and the Devils, Greer saw his share of press box duty. But with the B’s, he never felt as isolated as it can sometimes feel when you’ve been scratched a few times.

“It’s never fun. You want to help the team win, you want to be with the guys on the ice. But I think that it’s different because there’s such a good culture here,” said Greer. “Everyone’s got your back. You don’t feel out of the lineup when you’re out of the lineup. When I’m out, I try to work as hard as I can to show that I’m going to be ready once you put me back in the lineup. That happened with Toronto. I got sat the game before and I just told myself, ‘I’m going to be ready once I get the chance.’ ”

The 6-foot-3, 208-pound Greer was also signed by the B’s to provide some size, physicality and, at times, a little pugilism. He took on Matt Martin earlier this year and has fought the likes of Dustin Byfuglien. When Toronto’s Michael Bunting took a shot at Patrice Bergeron at the end of the second period, he didn’t let it pass.

But he’s learned to pick his spots. The Flyers’ Nicolas Deslauriers wanted to exact some revenge, and perhaps change momentum in a game that was quickly getting away from Philly, after Greer was released from the box after running into goalie Carter Hart. Greer was not going to give him that chance. On top of the game situation, Greer was feeling good about his own game and didn’t want to spend an extended time in the box again.

“I’m never going to say no to someone, but it has be the right time,” said Greer. “Because I can also play hockey and I can also contribute. I think I’m smart about when I want to fight and I pick my battles.”

The B’s recalled center Joona Koppanen and Montgomery said he’ll play on Wednesday. Nosek, who has been battling an undisclosed injury, will get the night off.

Seahawks mailbag: Are Seahawks really a run-first team? Will they re-sign Rashaad…