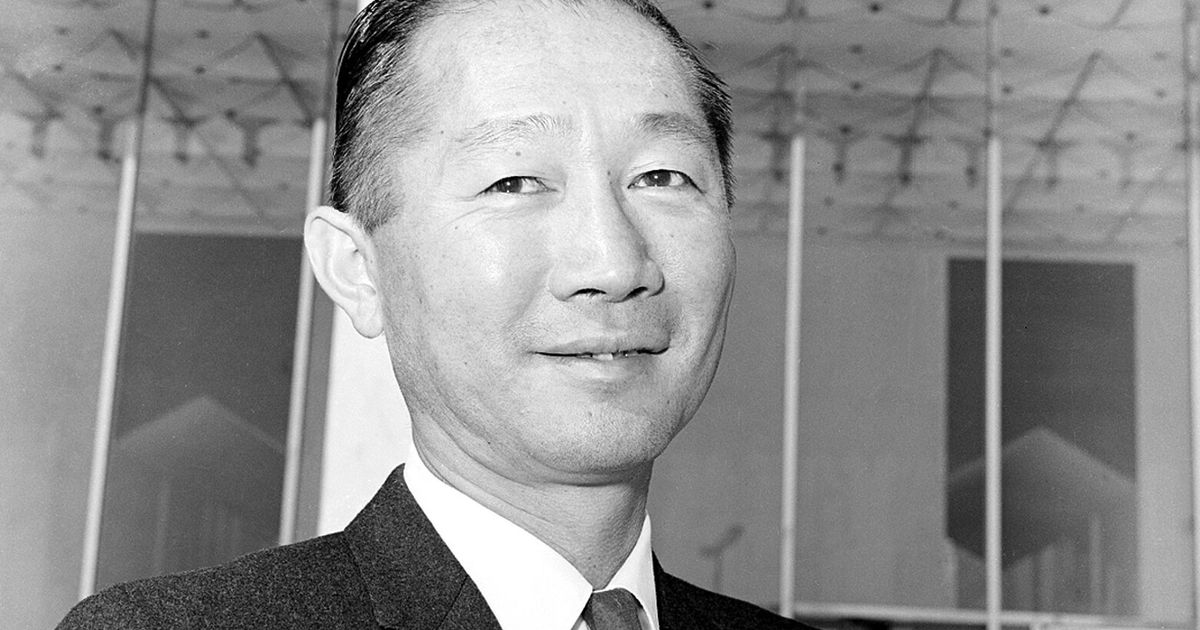 Katie Yamasaki’s grandfather left his mark on Seattle. Minoru Yamasaki, born in 1912 to Japanese immigrant parents, grew up poor in the Yesler Hill neighborhood, but became a world-renowned architect whose legacy included the World Trade Center towers and multiple structures here at home, most notably the graceful arches of the Pacific Science Center buildings, built for the 1962 World’s Fair.

Minoru Yamasaki died in 1986, but his granddaughter — an artist, muralist and children’s book author — had long thought of writing a book about him. It took many years, but her picture book “Shapes, Lines, and Light: My Grandfather’s American Journey” is finally published, and Katie Yamasaki will be in her grandfather’s hometown on Jan. 28 to talk about the book at Seattle Public Library’s Central Library. It’s a gentle, informative book for children, beginning with the reminder that, “Old people, it turns out, were not always old. Not even grandparents.”

Speaking from her home in Brooklyn this month, Yamasaki said that people first urged her to write about her grandfather more than 20 years ago, when the World Trade Center towers fell on that awful day in September 2001. “People would say, ‘if you write about your grandfather now, it would definitely get published,’” Yamasaki remembered. She was then a graduate student at the School of Visual Arts at New York University, and felt she wasn’t yet ready to tell his story as a writer.

“I also really wanted to give some space between 9/11 and when I would make this book,” she said. Time and distance helped her better understand the essence of his work, to “get the spirit that he was designing with, which was to create spaces where everyday people from every walk of life could have these feelings of uplift in the spaces they inhabit.”

She also wanted to tell the story of his journey, and not just to have him “most known for two projects that I think least represent him as an artist”: the World Trade Center and the troubled St. Louis housing project Pruitt-Igoe (demolished in the 1970s). “That was kind of a legacy that people were aware of for him,” Yamasaki said, but she wanted to draw attention to other structures he designed, those that “best exhibited the feelings he wanted people to have when they were in his spaces … serenity, surprise and delight.”

Mindful that she was writing for very young readers, Yamasaki was careful to keep her grandfather’s life story simple. “His family life was very complicated, and I felt like a children’s book wasn’t really the place for that,” she said. But she spoke of fond memories of spending weekends at her grandparents’ house growing up (she was 10 years old when Minoru died), and wanted to be sure that contemporary readers understood the challenges that Japanese Americans of Minoru’s generation faced.

“A lot of the spaces he entered, he was made to feel unwelcome,” she said. “I wish that my grandfather, from the day he was born, had been encouraged to understand the inherent value of his own life. I think he spent an extreme amount of time proving himself, and that’s just an unfair burden put on a lot of people of color in this country.” The book emphasizes how hard he worked, for so many years, to create what he believed would be welcoming spaces for everyone.

For the illustrations, Yamasaki immersed herself in pictures of her grandfather’s work, settling on a colorful collage technique to bring her story to life. “I don’t love drawing buildings,” she said. “His buildings are so complicated with so many windows and so many shapes and so many curved lines. They are beautiful to inhabit but to me they’re wretched to draw because they’re so complex.” Painting the shapes and then cutting them out “for some reason felt like a good fit for me, rather than just doing a regular painting,” she said.

Writing and illustrating the book gave her the pleasure of spending time with the art her grandfather created, such as the Pacific Science Center structures, which she playfully turned into an illustration with Minoru depicted on top of each lacy tower at different stages in his life. “Those structures are so magical to me,” she said. “They have this feeling of expansiveness — they don’t serve a functional purpose in the same way that a roof or a staircase does or a building with four walls, they serve an emotional purpose. I think there is such a value to that. It feels like an indulgence but only if we’re not counting our emotional experiences as more important than our physical ones.” She counts that design as among his career-best work, beautifully “honoring the human experience of being in a space.”

Yamasaki’s excited to come west to share her book with young readers and their parents, to a region that “my grandfather had such an affinity for, just in terms of the natural landscape and the beauty of the Pacific Northwest.” She’s hoping that it will inspire children to think and talk about their own passed-down family stories, and think about how they too can help create spaces where everyone feels welcome and peaceful.

“Grandpa always told my dad that drawing was simply looking carefully; truly seeing something,” Yamasaki wrote in the book’s author’s note. “This book is my attempt to draw the story of his life and work, to take the time to see him a little more clearly.”

Love Island fans all have same complaint about latest bombshell