A yellow kitchen in Ukraine is torn open, laying bare the sudden impact of Russia’s war on innocent lives 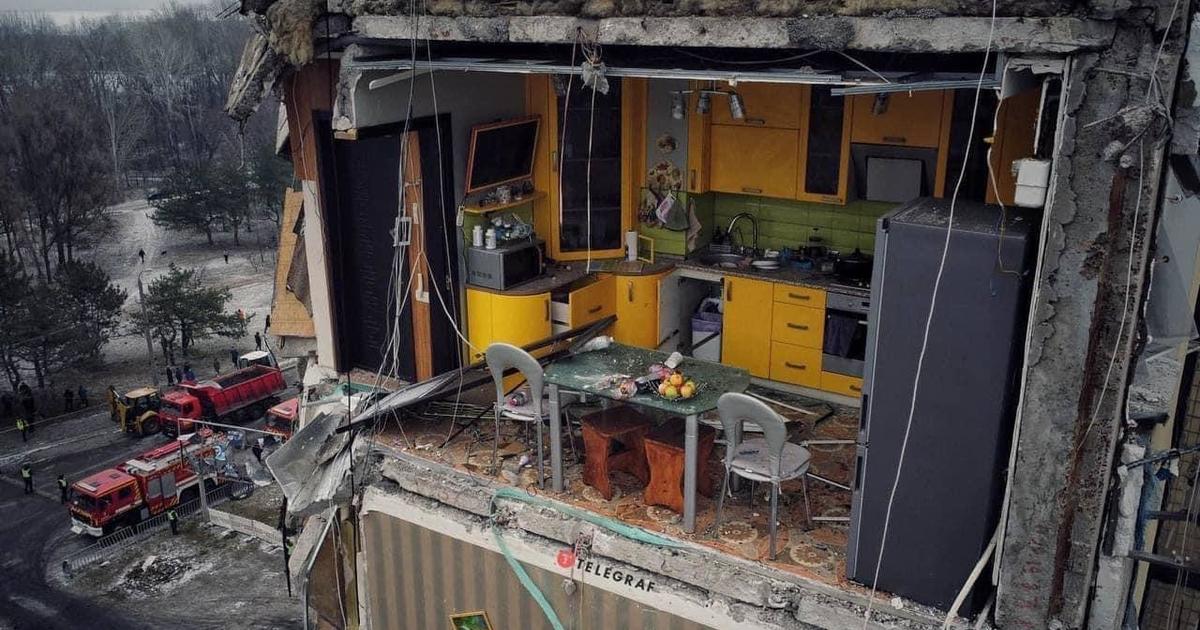 This is what it looks like when a 38-foot-long missile designed to take out an aircraft carrier cuts an apartment building in half. The building was home to hundreds of families in the eastern Ukrainian city of Dnipro. The apartment with the yellow kitchen was home to the Korenovsky family.

The apples still sitting on the table, right on the precipice of where the rest of the building was cleaved away, offer a stark example of the suddenness with which Russia’s merciless war in Ukraine can shatter civilian lives.

Before Russia hit Dnipro with a barrage of air and sea-launched cruise missiles, Mykhailo Koronevsky, a boxing coach, had celebrated his young daughter’s birthday in that kitchen. A video shared widely on social media this week shows her blowing out four candles on a cake in front of the distinct yellow cabinets.

On Saturday, Mykhailo stayed home while his wife and daughters went out for a walk. Ukraine’s national boxing federation confirmed that he was killed when the Russian missile tore a gaping hole in the long block of homes. The rest of his family survived.

A U.S. official told CBS News’ David Martin that the Russian military likely hit the apartment building in Dnipro with an air-launched AS-4 “Kitchen” missile. The rockets were designed by the Soviet Union to attack aircraft carriers and their accompanying warships.

As of Tuesday, the confirmed death toll from the weekend attack on the apartment building had climbed to 44, as Koronevsky’s family buried their husband and father. Search teams were still combing through the rubble.

Other survivors of the attack and area residents staged a small demonstration in front of the massive pile of twisted metal and crumbled concrete under the gap in the building. A video posted online by an advisor to Ukraine’s interior ministry shows them pleading with the international community to supply Ukraine with more tactical weapons, and to enforce a no-fly zone over their country to stop the missiles raining down on their homes.

“Here people cooked, had kitchen conversations, celebrated holidays, laughed, argued,” wrote Zoya Yarosh, a member of Ukraine’s parliament, in a post on her Facebook page, which included the photo of the destroyed kitchen. “These are the wounds on the body of Ukraine. Wounds on our homes.”

Andriy Yermak, the chief of staff for Ukraine’s president, told delegates at the World Economic Forum in Davos, Switzerland on Tuesday that his country had reported at least 80,000 alleged Russian war crimes since Vladimir Putin launched his war almost 11 months ago.

“We have registered 80,000 crimes committed by Russian invaders and over 9,000 civilians have been killed, including 453 children,” Yermak said. “We will not forgive a single (act of) torture or life taken. Each criminal will be held accountable.”

As the Koronevsky family and other Dnipro residents buried their loved ones, reports came in that more Russian bombs had slammed into the cities of Kupiansk and Kherson. There were no immediate reports of casualties, but again, it was civilian infrastructure hit, with a transport college in Kupiansk destroyed.

In her tribute to the victims of the Dnipro strike, including the family with the “kitchen the color of the sun,” the Ukrainian lawmaker Yarosh ended with a vow, that despite the wounds Russia is inflicting “on the body of Ukraine and its children… they won’t kill us all… We’re going to win.”

Tucker Reals is the CBSNews.com foreign editor, based at the CBS News London bureau.

Fat for fame: Social media stars sacrifice their health and waistlines for clicks and money

Creating a “lie detector” for deepfakes