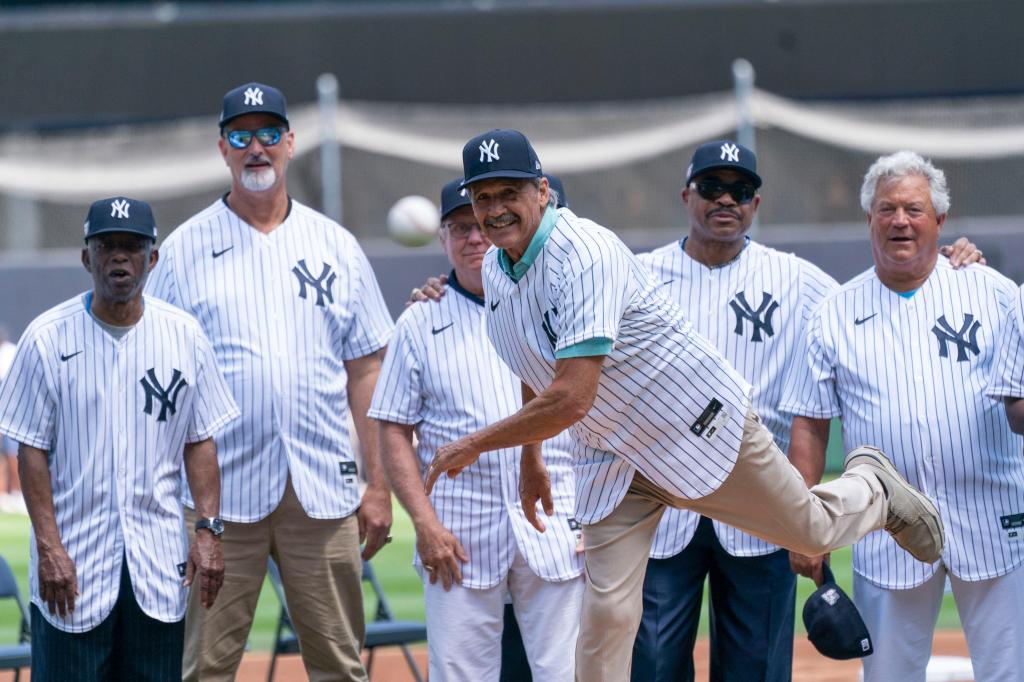 Bernie Williams is probably one of the few men in the world who understands. The Yankees’ outfielder had been out there under the microscope, thinking about the possibility of a future out of pinstripes. So, he’s watched Aaron Judge navigate this season carefully. Williams hopes that Judge will one day also be remembered as a great Yankee.

“I’m very happy for him, especially since this is such an important year in his career,” Williams said. “I think he feels the allure and the greatness of remaining a Yankee, I think he is definitely taking that in consideration. And I think the team should too.” WIlliams and the other former Yankees gathered in Monument Park among the tributes to the men who made this franchise and corner of the Bronx legendary. The 74th Old Timers Day at Yankee Stadium, the first since 2019 and the coronavirus pandemic, was different. There was no game, just the players out in Monument Park and then walking out from center field during extended introductions before Saturday’s game.

Many were not there, including Mariano Rivera, Lou Pinella, Doc Gooden, Darryl Strawberry, Reggie Jackson and Gary Sheffield who were scheduled to be at the National Sports Collectors Convention this weekend in Atlantic City.

“A lot of guys aren’t here so I’m a little disappointed some of my old teammates aren’t here,” Tino Martinez said. “But it’s still great to be here and we know nobody will get hurt today, that’s for sure.”

The talk among the former players instead was about the historic run that Judge is on in his walk year. The Yankees slugger gave them all an up-close look Saturday, when he hit his 42nd homer of the season in the Bombers 8-2 win over the Royals at the Stadium.

In 1998, he won the American League batting title and helped the Bombers to a World Series. He had turned down a $37.5 million deal from the Yankees during the season and the Red Sox’s $91.5, seven-year offer made the Yankees postseason offer of $60 million seem silly. On the verge of finishing his career in Fenway, Williams accepted a seven-year $89.7 million deal that guaranteed he’d retire a Yankee and bring him back for days like Saturday.

“I think it’s hard if you think about it,” Williams said of free agency looming at the end of the season. “I think as a player that was kind of like the last thing on my mind. I was always reminded of contract negotiations or the situation when I was asked about it. I think playing is his sort of distraction from this whole thing…He probably welcomes the opportunity that he has to play. So he doesn’t have to talk about this all the time.”

And Judge has certainly poured everything into this season.

He is on pace to crush the American League and Yankees franchise record of 61 for home runs in a single season. Judge is now on pace to hit 66 homers.

“I think it’s unbelievable. I mean it’s amazing to watch what he’s doing. Last night for example he hit two home runs when they needed it. He’s not hitting home runs in a 10-0 game. He’s been awesome to watch. I’d love to see him win a World Series, more importantly,” Martinez said. “I think he’s the kind of guy who, with all the media attention day in and day out, is not not gonna let it get to him. He could care less about 62 (home runs) , but I also hope he does get there as well.”

Willie Randolph, who has spent time with Judge as a spring training instructor, hopes he gets there, but knows it’s going to get harder.

“You would think that it’s attainable, but it’s gonna be hard. I’m surprised they are still pitching to him,” Randolph said. “I mean, what are you doing? The guy is 6-foot-7you don’t notice he’s up there. But that’s gonna change. And so it’s gonna be tough, but I would love to see him do it. Are you kidding me? It would be phenomenal. “

And it will not only add to the mystique of Judge’s Yankees career, but it will add up to more money that it will cost to keep him in pinstripes. The old timers that were mixing and mingling before the ceremony on Saturday are hopeful that Judge will one day be among the historic players honored on days like this and in Monument Park. They all recognize in Judge what they themselves had back in the day.

“Every time I see him talking on TV, he just says the right things all the time. He’s a good ambassador for the team, and I think he’ll be, if he signs a long term deal he’ll probably be in line to get the next captain,” Williams said. “There’s no doubt about that in my mind.”

How long do antibiotics take to work?