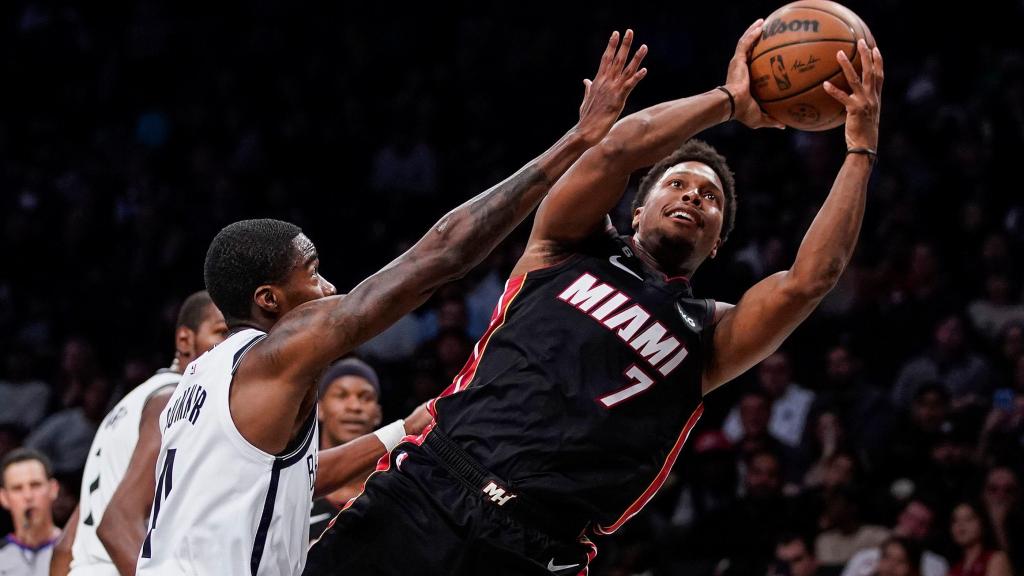 When it doubt, sit it out.

That essentially was the theme of Thursday night’s 109-80 exhibition victory at Barclays Center even before the Miami Heat took the court against the Brooklyn Nets.

So no Tyler Herro, Caleb Martin, Omer Yurtseven and Dewayne Dedmon for the Heat, and still no Victor Oladipo or Gabe Vincent.

In each case, nothing more than nagging aches and pains, but also no reason for coach Erik Spoelstra to push things two weeks out from the Oct. 19 regular-season opener against the Chicago Bulls at FTX Arena.

It also was a case of Nets Lite, with Brooklyn without Kyrie Irving, Seth Curry, Joe Harris and T.J. Warren. In the wake of the birth of his second child this week, Irving watched from the baseline.

Through it all, Kyle Lowry and Bam Adebayo played as leading men for the Heat, Adebayo closing with 17 points in 24 minutes, Lowry with 15 in 24. By contrast, it was a quiet night for Jimmy Butler, with two points in 17 minutes in his preseason debut.

Spoelstra said the game was heartening because of the intensity delivered by his team after a blowout preseason-opening loss Tuesday night at FTX Arena to the Minnesota Timberwolves.

Kevin Durant led the Nets with 22 points in 26 minutes.

Five Degrees of Heat from Thursday’s exhibition against the Nets:

1. Power drain: It turns out Yurtseven closed Tuesday’s loss with ankle soreness, unable to convince Spoelstra to allow him to play.

“I tried going at shootaround, but they said no,” Yurtseven said.

Then, 90 minutes before tipoff, the Heat announced that Dedmon was not available due to plantar fasciitis.

That put on hold the experimentation with dual centers that Spoelstra utilized Tuesday in starting Yurtseven and Adebayo.

Instead, it was first-round pick Nikola Jovic entering as the Heat’s first center off the bench, with an impressive display of his oversized perimeter skills, closing with 10 points, five assists and three rebounds in 16 minutes.

2. Still undecided: With Martin out due to knee pain, it further put on hold a decision on the starting replacement at power forward for P.J. Tucker, who left in free agency for the Philadelphia 76ers.

“Tuck had a major influence on our team, there’s no denying that,” Spoelstra said, “but our guys have been around long enough that you just have to expect that there will be some change.

“You’re not going to plug somebody in to be him. I don’t want that. You know that it’ll look different, and that’s what I want to be intentional about, being open-minded. I’d like to be different and hopefully better, and it might be two or three different players. It might be one. But I don’t know at this point.”

3. Quick change: With a quick turnaround to Friday night’s exhibition in Memphis, Herro said he also expects to sit out against the Grizzlies. Herro bruised his right knee during Tuesday’s loss but continued on.

Max Strus started in place of Herro, closing 4 of 12 from the field.

Spoelstra said before Thursday’s game that the expectation is for Oladipo to make his preseason debut in Monday night’s home exhibition against the Houston Rockets. The Heat have been cautious with Oladipo after four injury-plagued seasons.

But Spoelstra said the plan is for Vincent to make his first preseason appearance in Memphis, with the reserve guard dealing with knee pain the past two weeks.

Following the game, Spoelstra said Adebayo, Lowry and Butler all would be given the night off in Memphis.

4. Butler’s debut: After being held out Tuesday, ostensibly for rest, Butler was back in an NBA setting for the first time since his missed 3-point attempt late in Game 7 of the Eastern Conference finals instead sent the Boston Celtics to the NBA Finals.

Butler closed 1 of 4 from the field, with four rebounds and an assist.

“He’s had a great camp,” Spoelstra said of Butler. “He’s in terrific shape.”

5. Kid stuff: With so many rotation players out, it opened the door for early minutes for Heat neophytes Jovic, Cain, Dru Smith and Marcus Garrett.

Cain showed the athleticism that earned a camp invitation out of summer league, with the undrafted guard out of Oakland University making his first five shots.

“You feel good for guys that have really been putting in the work,” Spoelstra said.

Cain said the game pitted him against his basketball idol in Durant.

“I was trying to embrace the moment,” Cain said.

VPN use skyrockets in Iran as citizens navigate internet censorship