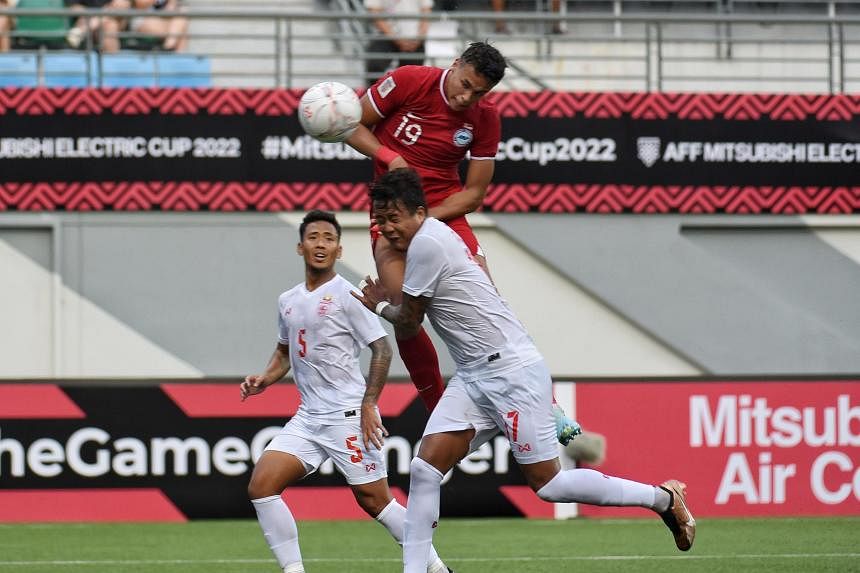 SINGAPORE – The Lions know the scores – Vietnam 6 Laos 0, Malaysia 5 Laos 0 – as well as the equation.

With Vietnam tipped to top Group B in the Asean Football Federation (AFF) Championship and advance to the last four, it looks like Causeway rivals Singapore and Malaysia will slug it out for the other semi-final spot.

This is why while they are prioritising a win at the New Laos National Stadium on Tuesday, Singapore are also looking to rack up the goals against the regional minnows whom they have beaten in all six previous meetings at the biennial tournament.

A big win could help narrow the goal-difference gap going into the Jan 3 Causeway Derby in Kuala Lumpur.

Striker Ilhan Fandi told The Straits Times: “We don’t want to be overconfident because Laos have good players such as their captain and winger (Soukaphone Vongchiengkham).

“But of course, we will aim to score as many as we can because goal difference could turn out to be crucial in determining who progress to the semi-finals. It will be good if this game opens up for us.”

The Lions have been in fine scoring form as they beat the Maldives 3-1 in a Dec 17 friendly before overcoming Myanmar 3-2 in a bruising opening Group B match on Christmas Eve.

Ilhan was involved in a horrifying clash with Myanmar goalkeeper Myo Min Latt but bounced back to score an equaliser that inspired his team’s win. However, a groggy Ilhan was subbed out in tears in the second half with a nose contusion.

The 20-year-old, who celebrated his goal with a tribute to his injured brother Ikhsan, said: “Football is not the nicest sport and some things happen that are not within our control, but I love football and this is what I do.

“I just went for the ball and I got smashed. I blacked out for a bit and it was a bit of a shock. I continued playing because I felt I could still contribute and had a feeling I would score, which I did a few minutes later.

“I came off as a precaution but I was not upset with the coach. I just wanted to contribute more. But we have fantastic attacking options and we got the job done in the end.”

After an 8.5-hour journey to Vientiane, which included a four-hour transit in Phnom Penh as there was no direct flight to the Laos capital on Christmas Day, Singapore coach Takayuki Nishigaya’s best present was the news that all his players are fit for selection.

As the seniors led the way, Nishigaya was also impressed with the energy his younger players showed. Ilhan and Shah Shahiran, 23, scored on their AFF Championship debut, Hami Syahin, 24, got an assist, while Joshua Pereira, 25, and Ryhan Stewart, 22, also got a taste of the action.

The 49-year-old Japanese said: “We have no major injury concerns, everyone is ready to play. The young players are the future and will have a chance to feature, and we will decide on the line-up after analysing Laos and having our only training session here.

“We always want to score more goals but Laos can be dangerous now that they have nothing to lose. They have good attackers and we cannot be complacent.”

The Lions could be given a further boost as Laos’ France-born striker Billy Ketkeophomphone is an injury doubt.

He added: “We had a substandard game against Vietnam and we made similar mistakes with cross-balls defending against Malaysia. We will go for a more offensive set tomorrow, we will not sit back. We want to go for a better result and only defending will not help us.”

Want to run outdoors this winter? Here are some tips from a Canadian Olympic marathoner