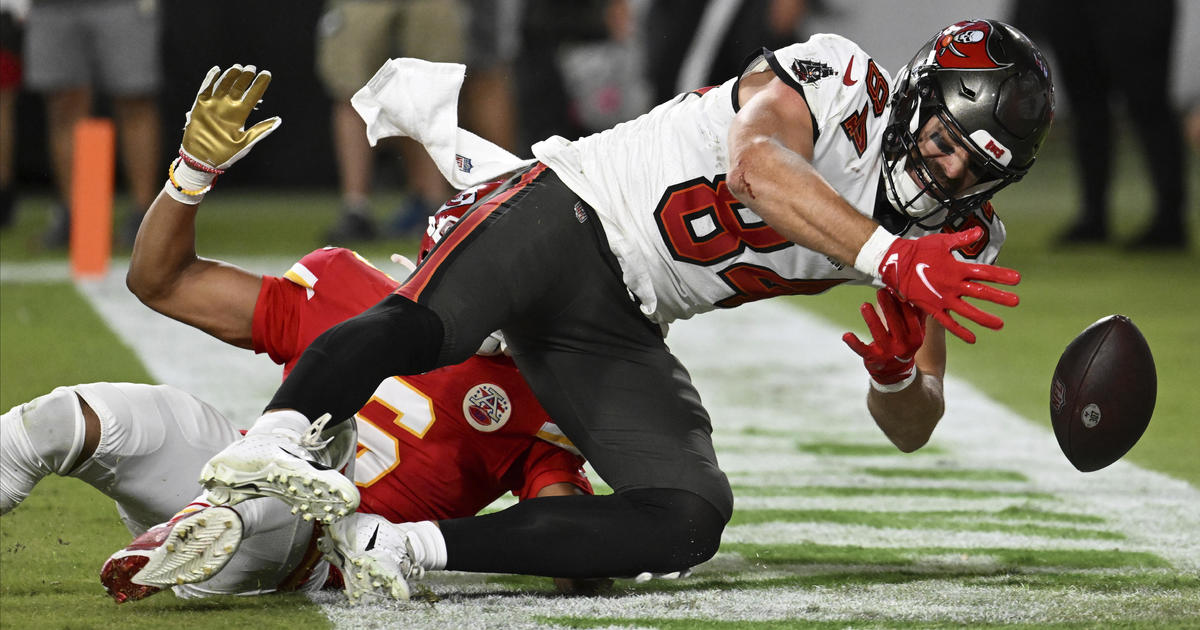 Tua Tagovailoa’s threatening head injury called into question the league’s commitment to curbing concussions Three days later what happened in Tampa Bay was the last thing the NFL, its players and its fanbase needed.

Buccaneers tight end Cameron Brate sat out the second half of Sunday night’s 41-31 loss to the Kansas City Chiefs with a concussion after colliding with a teammate and initially being allowed to re-enter the game.

Brate was shaken up just before halftime after catching a pass for a 9-yard gain and colliding with Bucs receiver Chris Godwin while being tackled. Brate stayed down for a few seconds before heading for the sideline, but he didn’t get off the field fast enough for Tampa Bay to avoid a penalty for having too many men on the field on the next play.

Brate re-entered the game and was Tom Brady’s intended receiver on multiple incompletions just before halftime.

Coach Todd Bowles said after the game that Brate was in the concussion protocol but was unable to explain why he was allowed to re-enter the game with a head injury.

A day later, Bowles said it was because Brate experienced delayed symptoms of a concussion at halftime after initially complaining only of shoulder discomfort and being allowed to return to the game.

“Broken system,” tweeted Hall of Fame coach Tony Dungy, who was in attendance in his role as an analyst for NBC’s “Football Night in America.”

“I was on the sideline very close to Brate – obvious he had his bell rung,” Dungy continued. “There’s a league-appointed spotter in the press box who should stop play & alert the referee. Brate shouldn’t have been allowed to return until after an evaluation. Why didn’t that happen???”

Dungy added: “Coaches, team doctors and game officials are all watching the play and can all step in. But the league-appointed spotter has the ability to buzz the referee, stop the game and mandate that player leave the game to be evaluated – no penalty or timeout charged to the team.”

Bowles said Monday that Brate was checked out three times before being allowed to re-enter the game with the Bucs driving for a touchdown that trimmed Tampa Bay’s deficit to 28-17 at halftime. Brate said “nothing about his head” while complaining of shoulder discomfort, Bowles said.

The NFL’s concussion and diagnosis protocol states that potential signs of a concussion include: “Slow to get up from the ground or return to play following a hit to the head” which “may include secondary contact with the playing surface,” and “motor coordination/balance problems of neurologic etiology (stumbles, trips/falls, slow/labored movement).”

Bowles said Brate was re-examined at halftime after symptoms arose and “we kept him out the rest of the game.”

That did little to placate critics who say Tagovailoa never should have been allowed to suit up against the Cincinnati Bengals on Thursday night, just four days after Miami’s quarterback came up stumbling when his head hit the ground in a game against the Buffalo Bills on Sept. 25.

Tagovailoa initially seemed to exhibit concussion symptoms against Buffalo, but he was cleared by a team physician and unaffiliated neurotrauma consultant, or UNC, to return to the game. He and the team later explained his legs were wobbly because of a back injury.

Still, the league and its players’ union began a joint review into Tagovailoa’s quick return to the Bills game that is ongoing.

The league and the NFLPA issued a statement last week that said they had made no conclusions about “medical errors or protocol violations” while the investigation is still underway. But the two added that “modifications are needed … to enhance player safety.”

Tagovailoa’s concussion was topic No. 1 across the NFL heading into Sunday’s slate of games, and coaches across the league spoke about safety being the game’s top priority.

Then came Sunday night when Brate kept playing despite a head injury.

“IT HAPPENED AGAIN @NFL!” tweeted Chris Nowinski, a founder of the Concussion Legacy Foundation who played football at Harvard and is adamant Tagovailoa sustained a concussion against Buffalo and shouldn’t have played at Cincinnati.

“Cam Brate went back in 4 plays after showing #concussion signs from this huge hit to the head. He stayed down too long & couldn’t run off the field fast enough to avoid a penalty,” Nowinski fumed, adding that Dungy “says it was obvious he had a concussion. How did he go back in?”

Bowles said an unaffiliated neurotrauma consultant did not ask the Bucs to test Brate for a concussion.
“Nobody called down. He was checked out three times. He went back in until the end of the half. The concussion thing didn’t come up until halftime. He had delayed symptoms,” Bowles repeated.

Bowles acknowledged “it was a noticeable hit, but again it was on the shoulder. Nobody said anything about the head.”

Given what happened to Tagovailoa just 72 hours earlier, somebody certainly should have.

2022 FIFA World Cup: How to stream the Morocco vs. Spain game

Who signed off on this? Bizarre notices will make you do a double take

‘We can cope with Christmas rush’, Dublin Airport Authority says in response to…