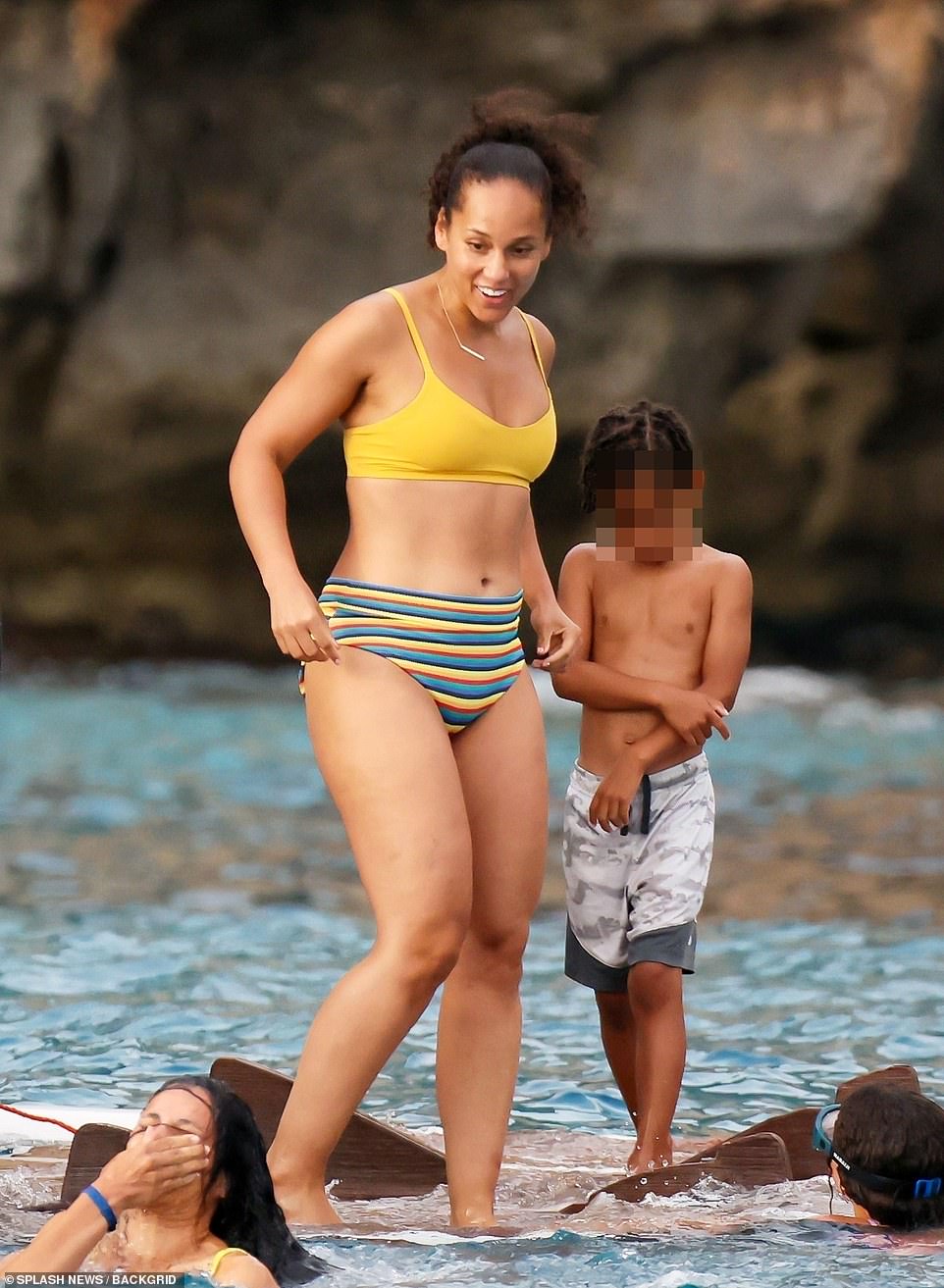 Alicia Keys, 41, shows off her fit summer body in bikini during family vacation with husband Swizz Beatz off the coast of the Spanish island Formentera

Alicia Keys was seen enjoying vacation time with her family amid the holiday weekend on Saturday.

The singer, 41, looked stunning in a two-piece swimsuit as she stayed cool in the water with her two kids, Egypt, 11, and Genesis, seven.

The family relaxed on a boat when they weren’t soaking up the crystal blue water near the island of Formentera, Spain.

The songstress donned a bikini which showed off her toned abs as she had some fun in the water.

The top piece was a plain yellow mustard color, with the bottom piece containing striped colors of blue and yellow.

Her hair was pulled back into a tight ponytail to keep any loose strands from falling into her face.

She added a gold necklace to accessorize her beach day look, and could be seen wearing gold-hooped earrings when she wasn’t taking a dip. 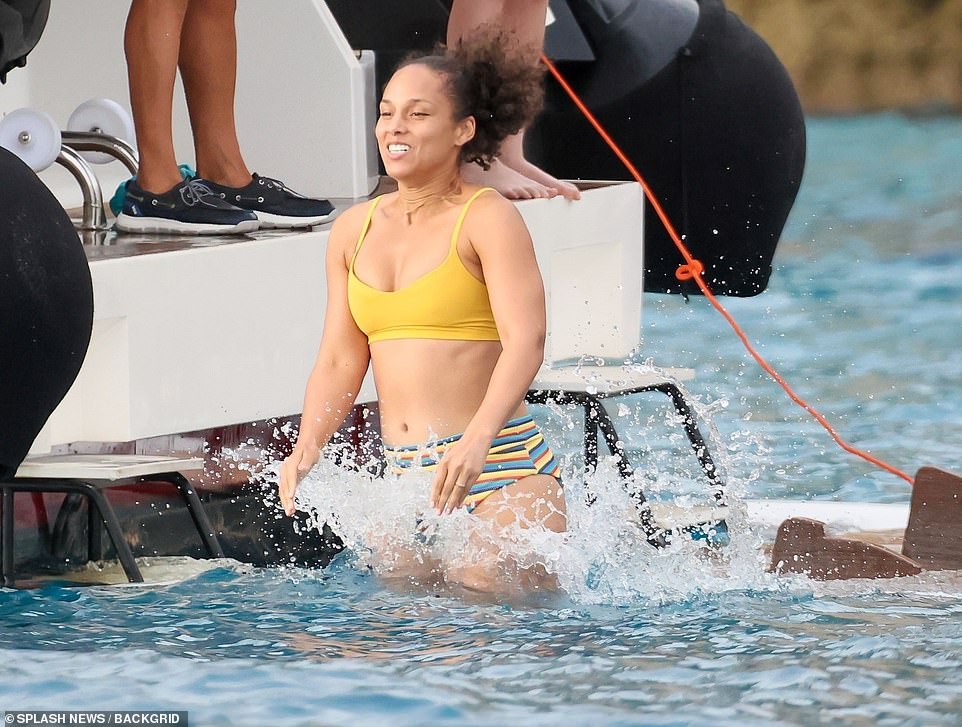 Big splash! The singer jumped into the clear water as she enjoyed a day on a boat off the island of Formentera, Spain 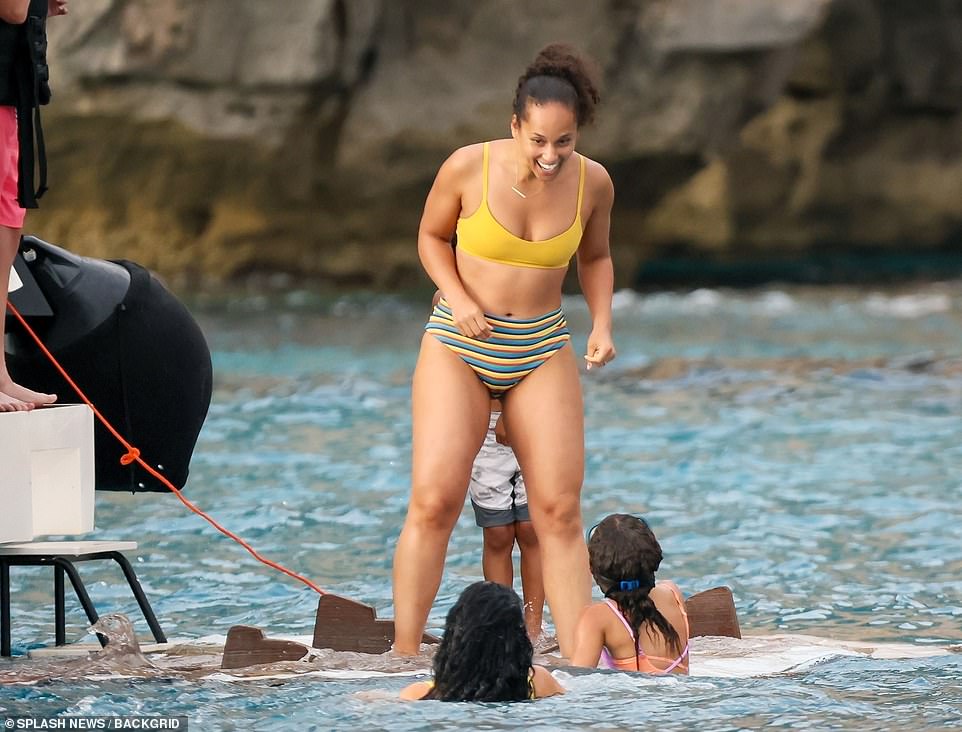 Yay! The songstress grinned with glee as she stood in the water 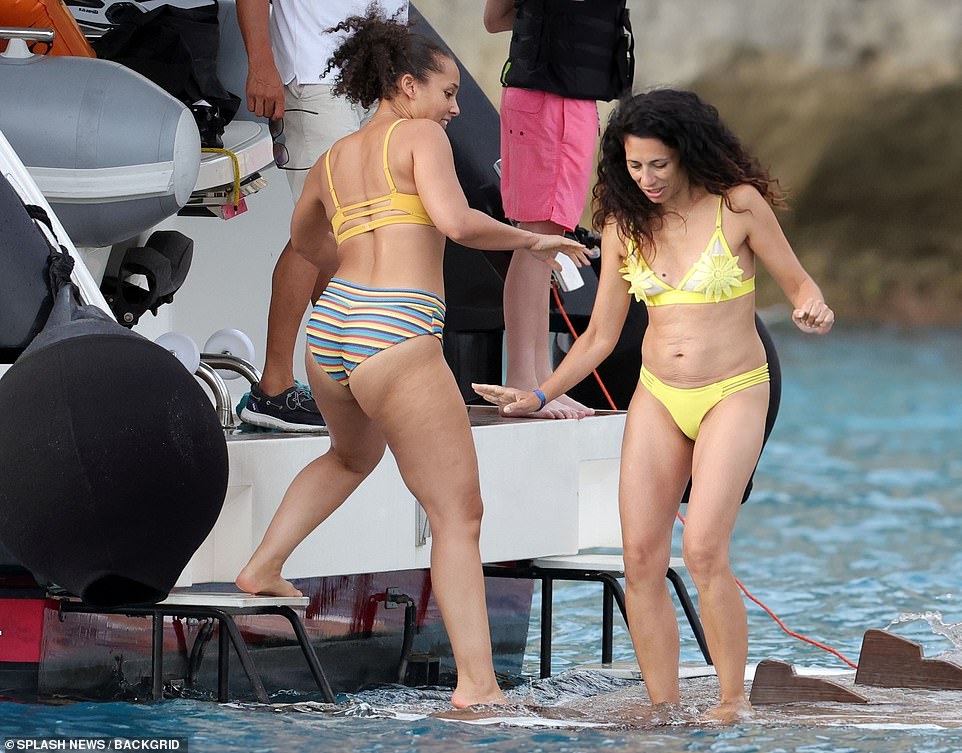 Good times: Alicia and a friend are seen testing out the water before jumping right in during their beach day

The Girl On Fire singer was seen taking a quick dip in the water with an excited smile on her face.

In another photo, Alicia took a moment to test out the temperature of the ocean along with her friend.

When the No One hitmaker wasn’t splashing around the water or playing fun games with her children, she took a break and donned matching yellow joggers to relax on the boat. 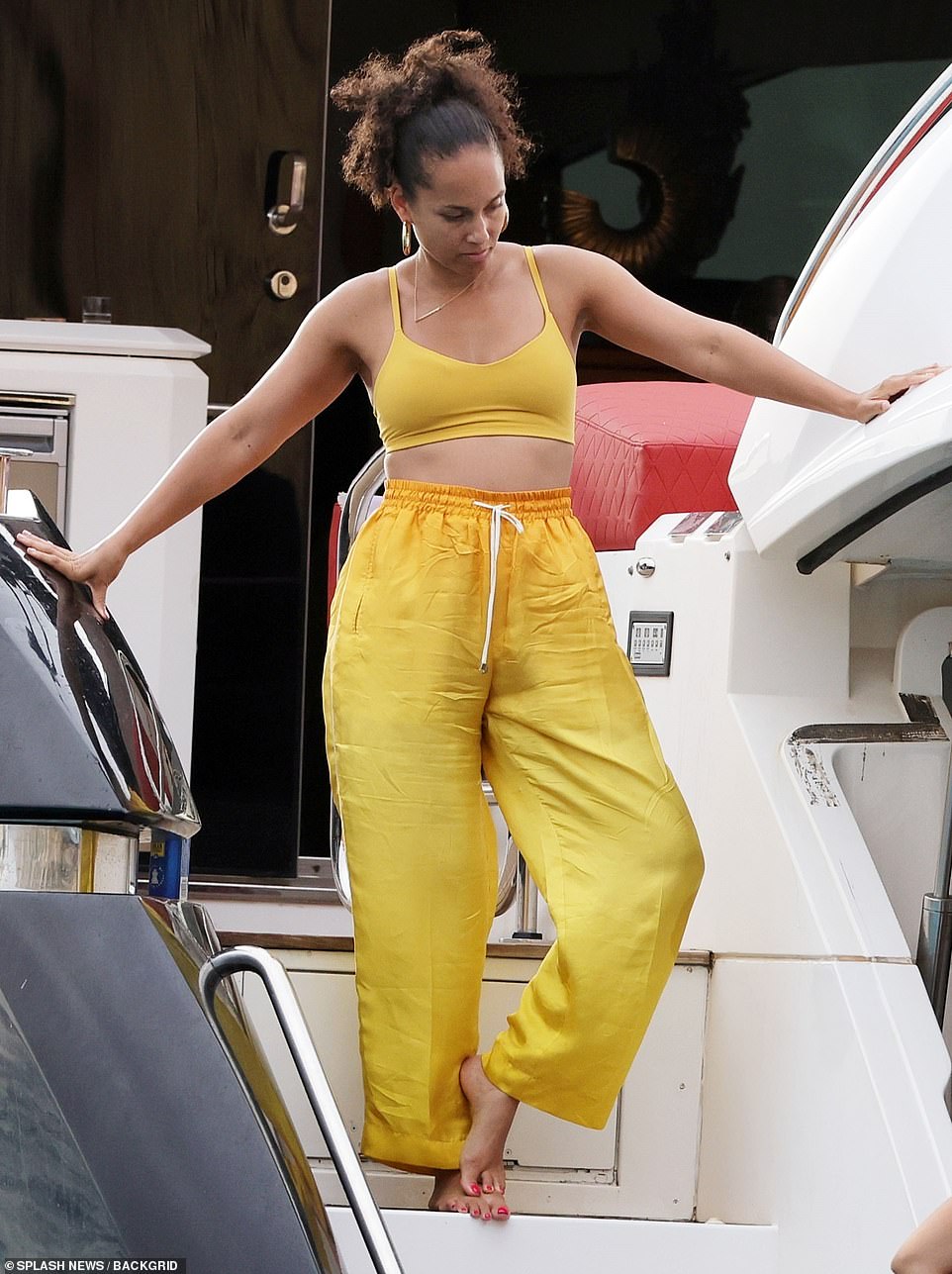 Super stylish: The Girl Is On Fire singer donned yellow pants to lounge and be comfortable on the boat 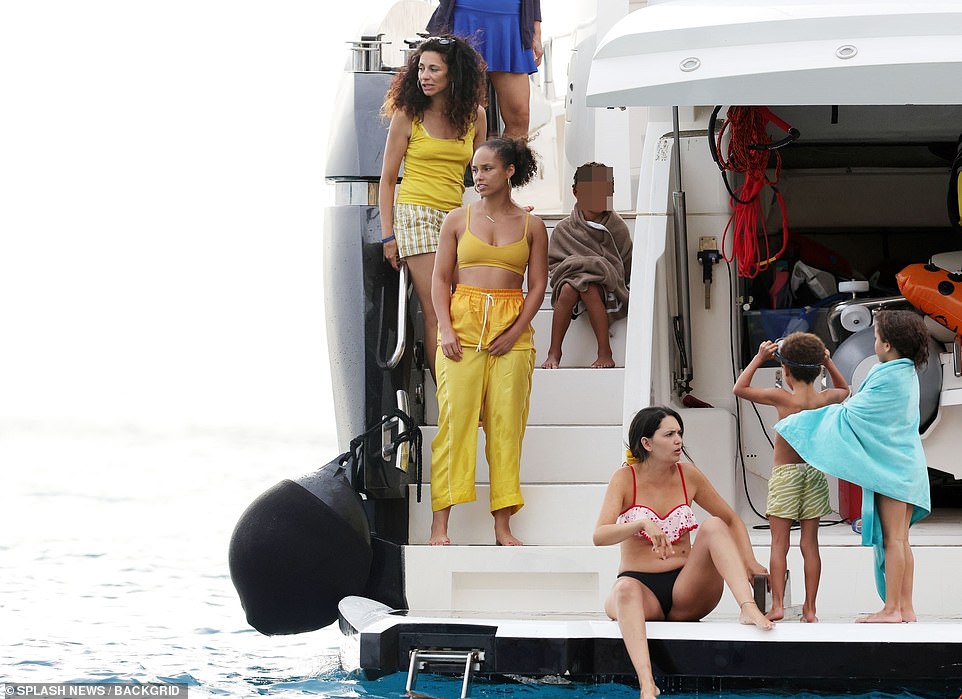 Making a splash! The Fallin’ songstress checked out the views from the boat 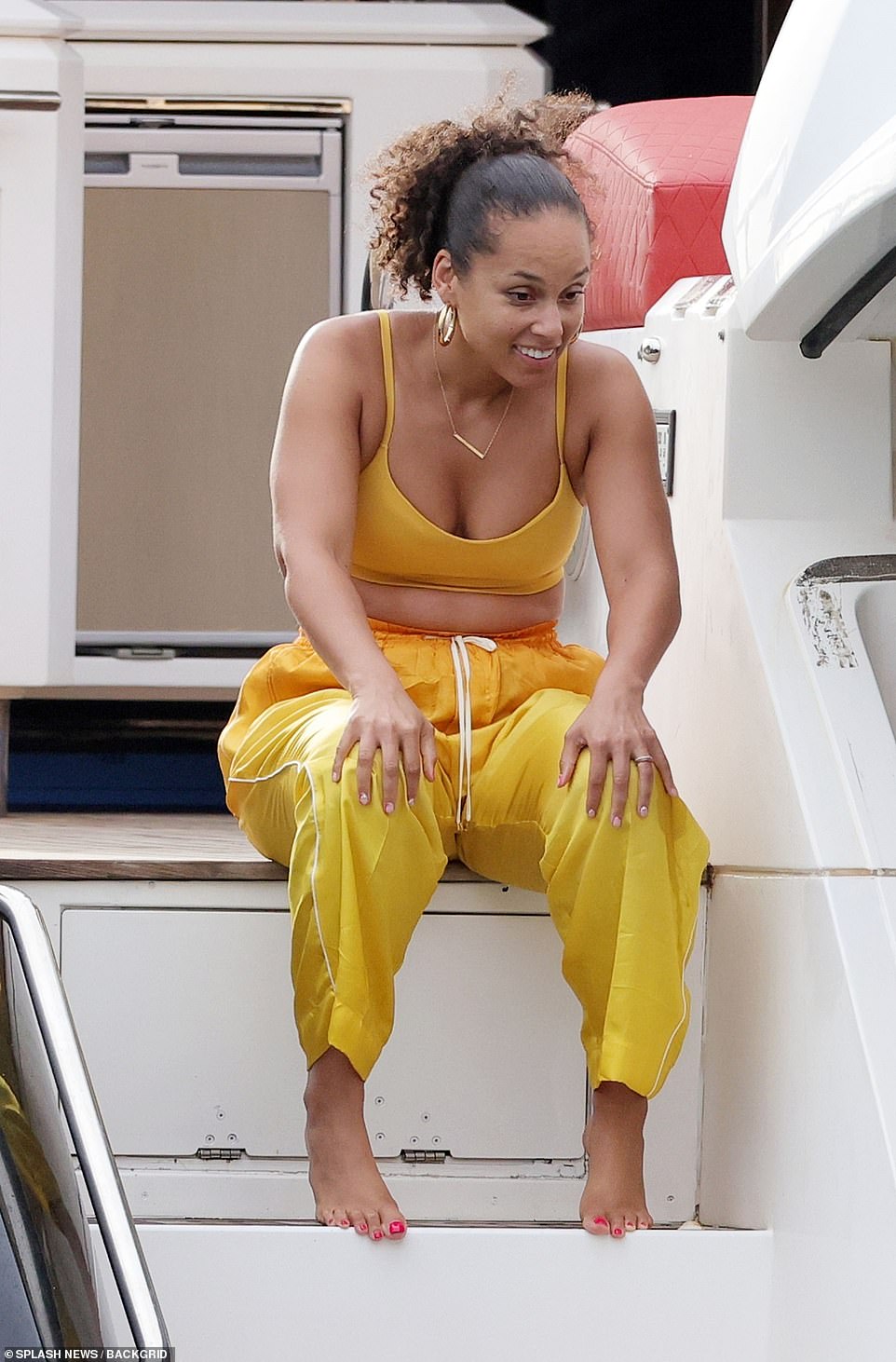 Ray of sunshine! The hit-maker wowed in a vibrant yellow look 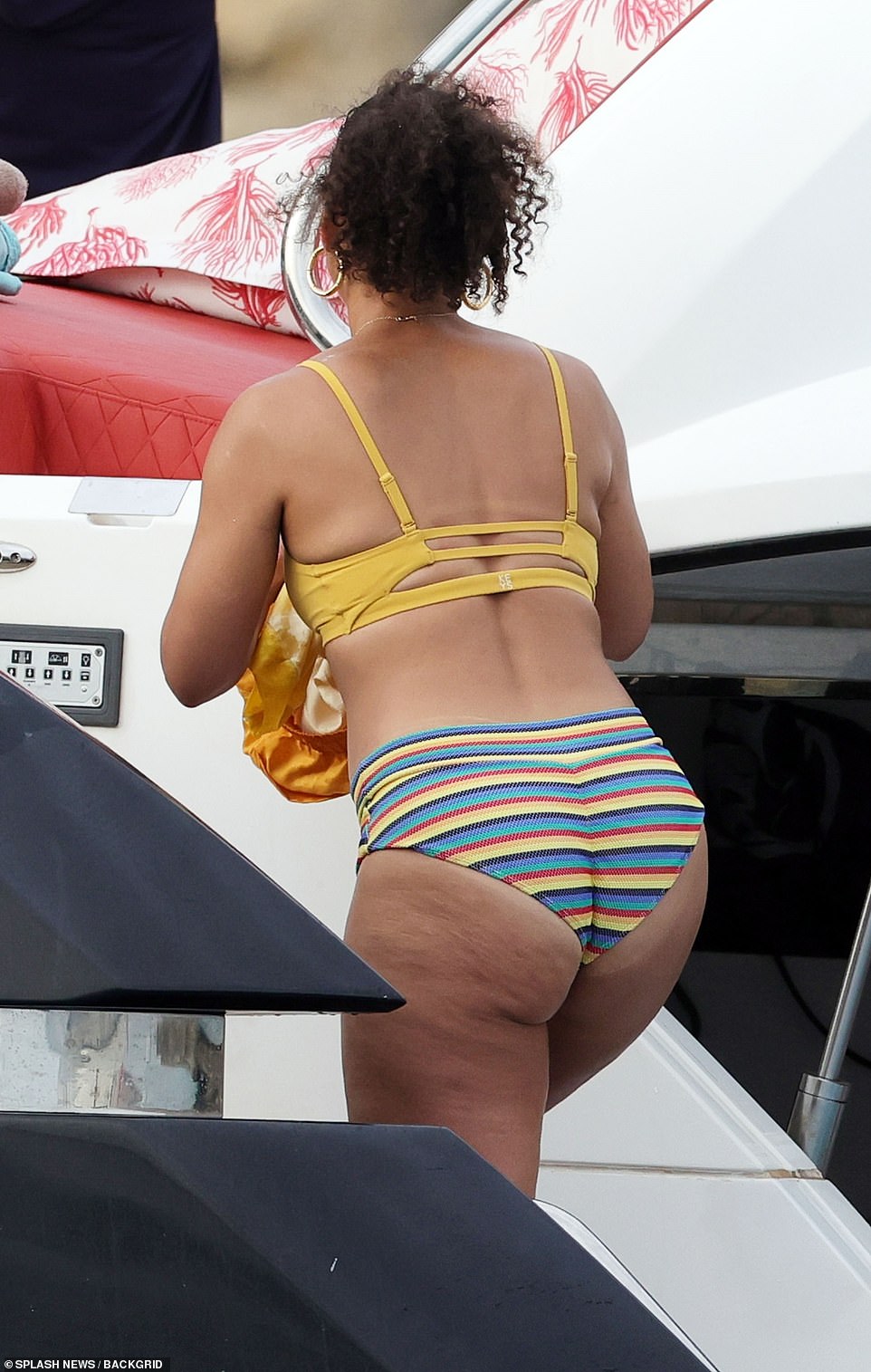 Life’s a beach! The hit-maker made her way around the boat in her colorful bikini 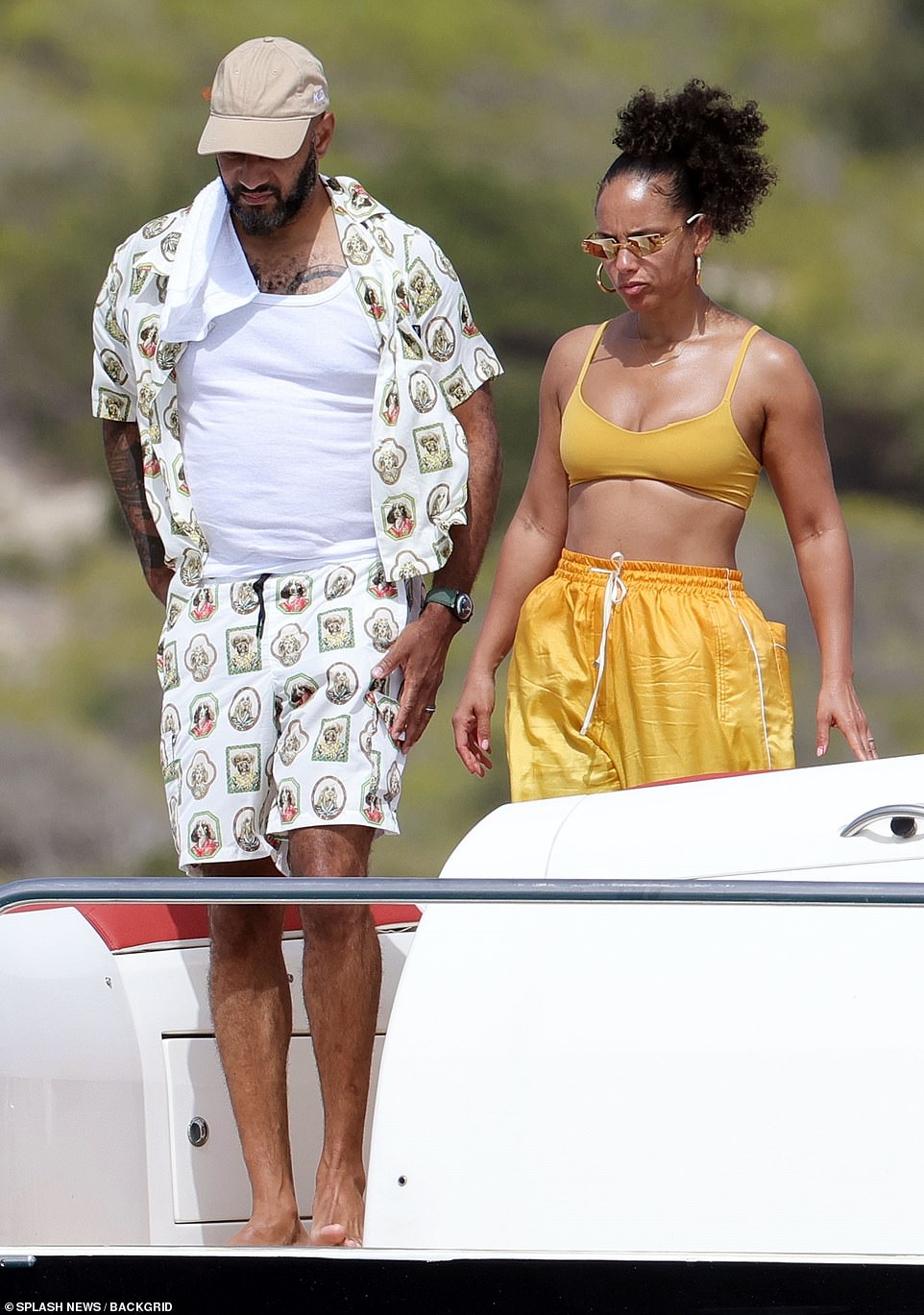 A day of memories: Alicia and her husband, Swizz Beatz, were seen walking along a boat during their trip

Alicia was seen next to her husband, Swizz Beats, as they took in the bright sun. She donned a pair of gold, rectangular-shaped sunglasses.

Her husband also kept his look cool and casual, wearing white shorts and matching button-up shirt with a pattern of dogs in picture frames.

He added a plain white T-shirt underneath and a cream-colored cap on top of his hair. 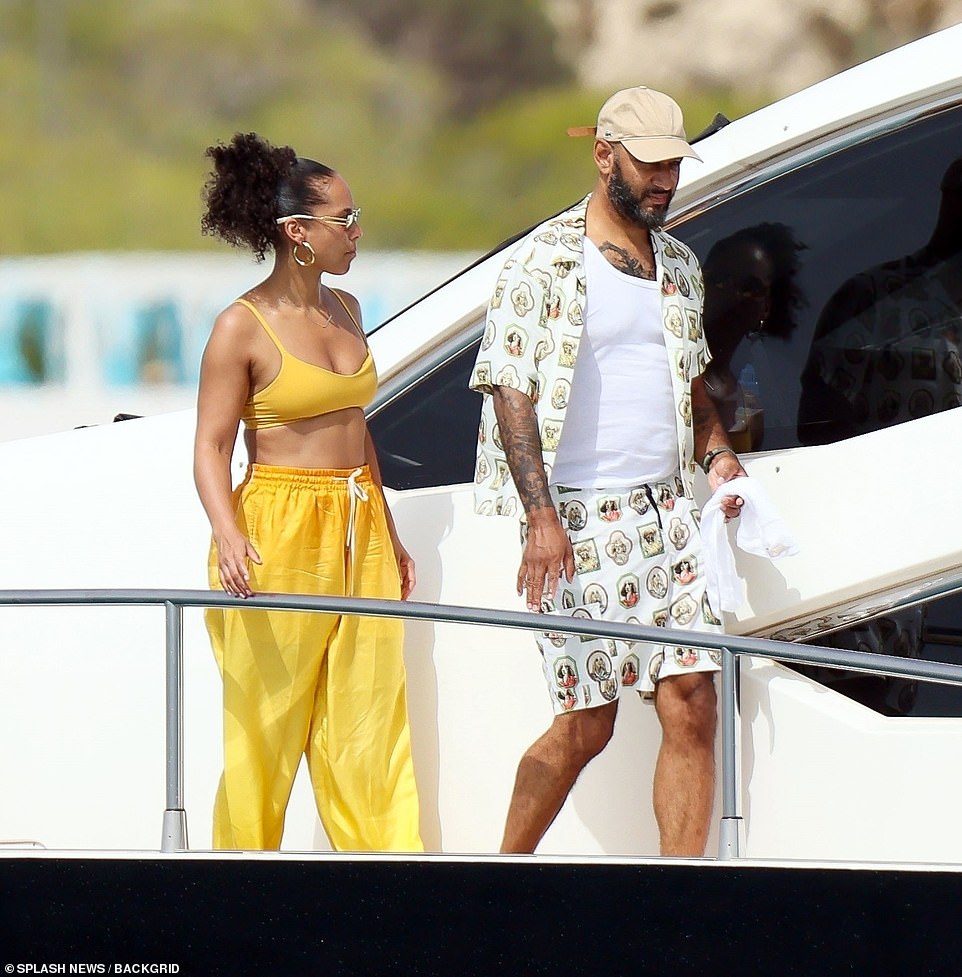 Man of style! Her husband also kept his look cool and casual, wearing white shorts and matching button-up shirt with a pattern of dogs in picture frames 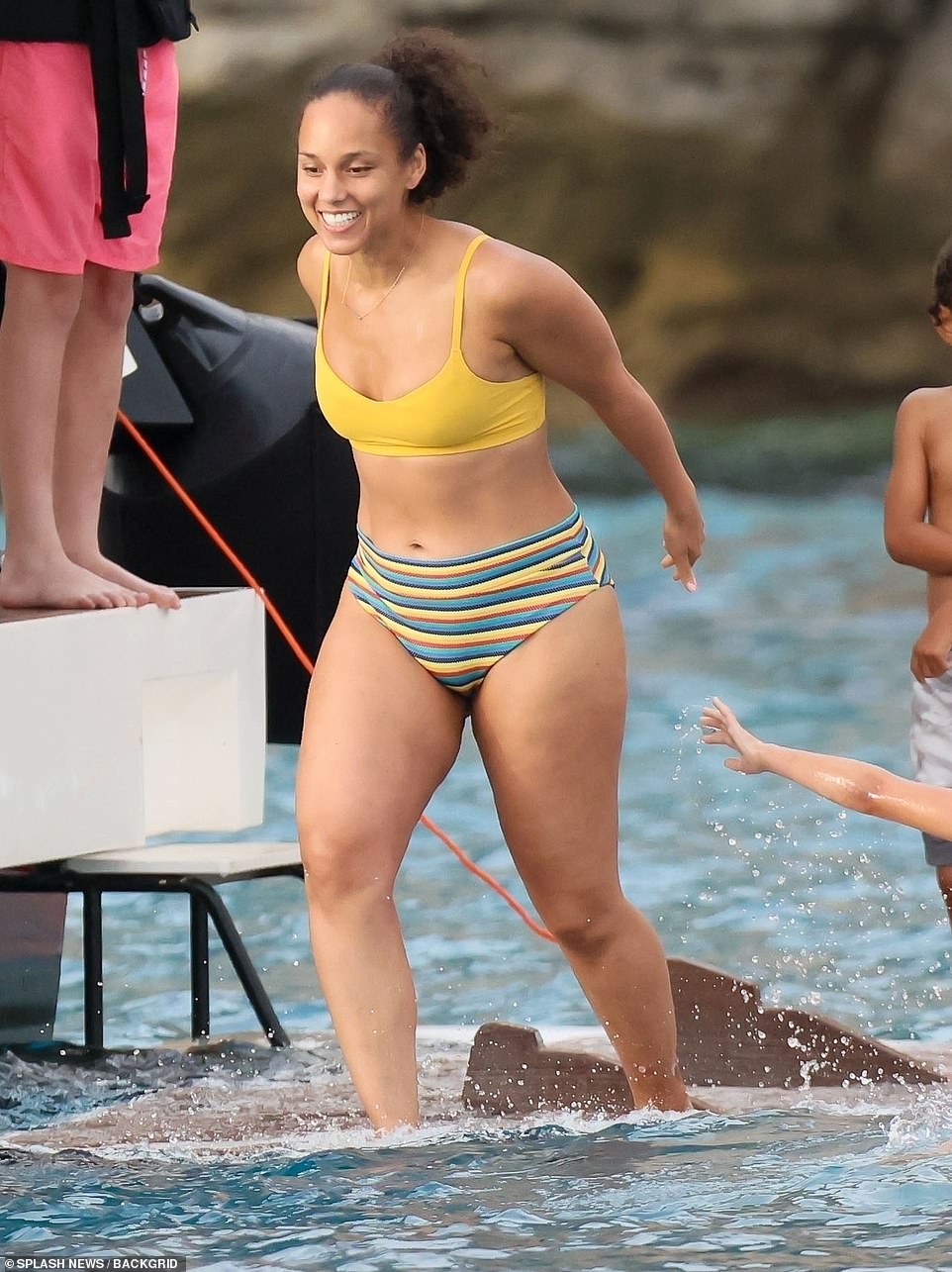 So fun! Alicia appeared to be having a blast while playing in the water with her children on their beach day 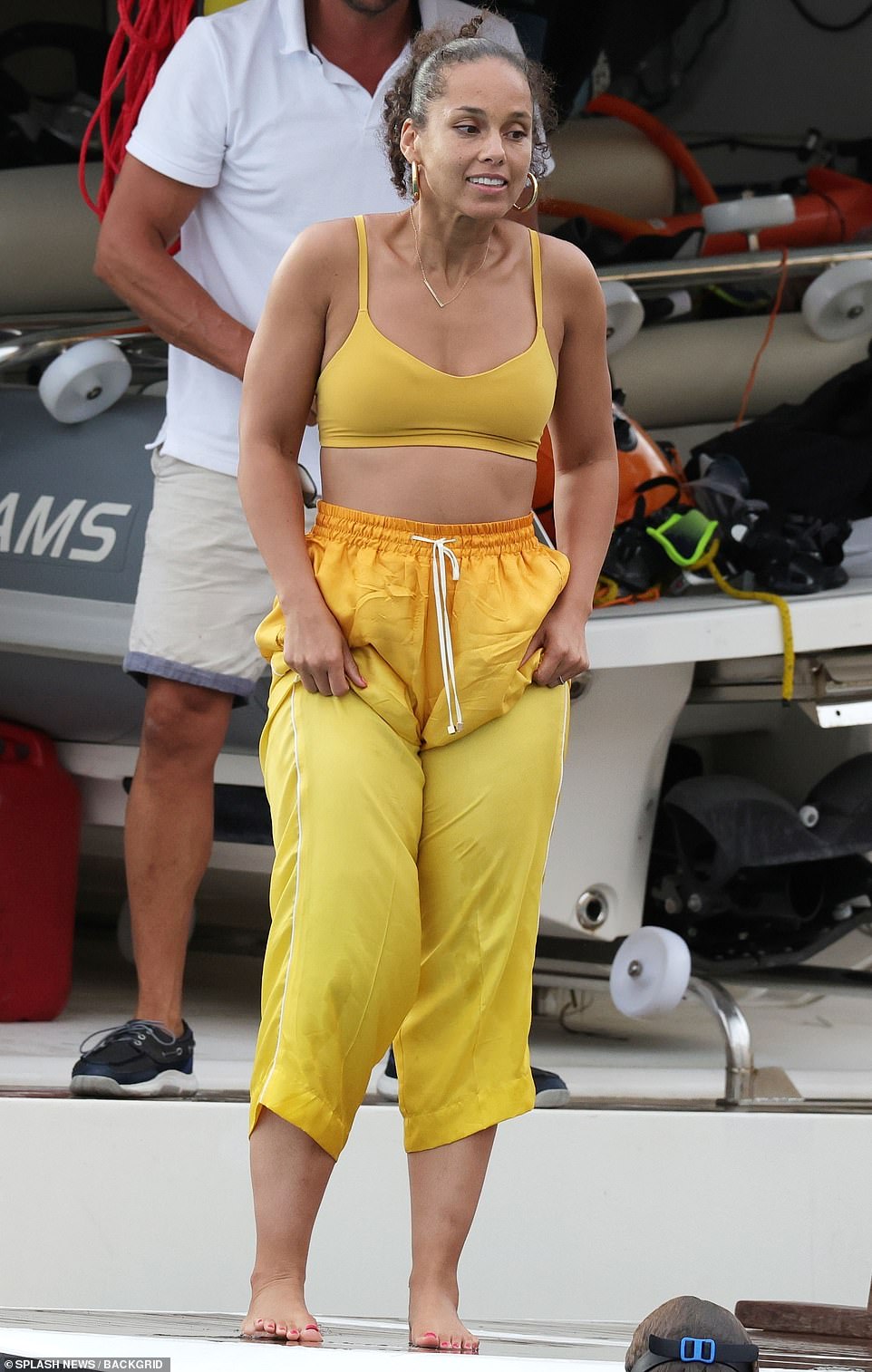 Brrrrr: The star looked to be a little chilly as the time got later and the sun began to disappear

The Grammy award-winning singer is not only in Spain for a fun getaway with her family, but also for two big concert performances.

Alicia has been on a world tour, and already performed in the UK and Poland. She is set to have a concert on Fourth Of July in Madrid.

She will then move on to other areas in Europe, such as France and Germany, and will finally finish off her tour in September back in the states. 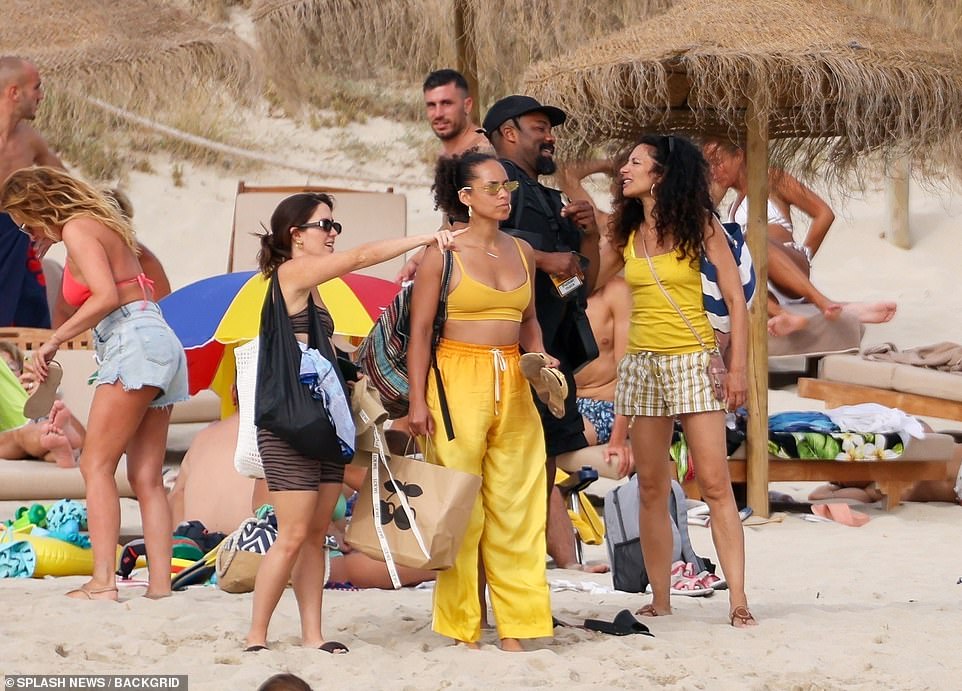 Busy bee: The Grammy award-winning singer is not only in Spain for a fun getaway with her family, but also for two big concert performances

‘A new golden age of travel’ — How Airbnb went from airbeds…