All-Star media flock to J-Rod … and France is there, too 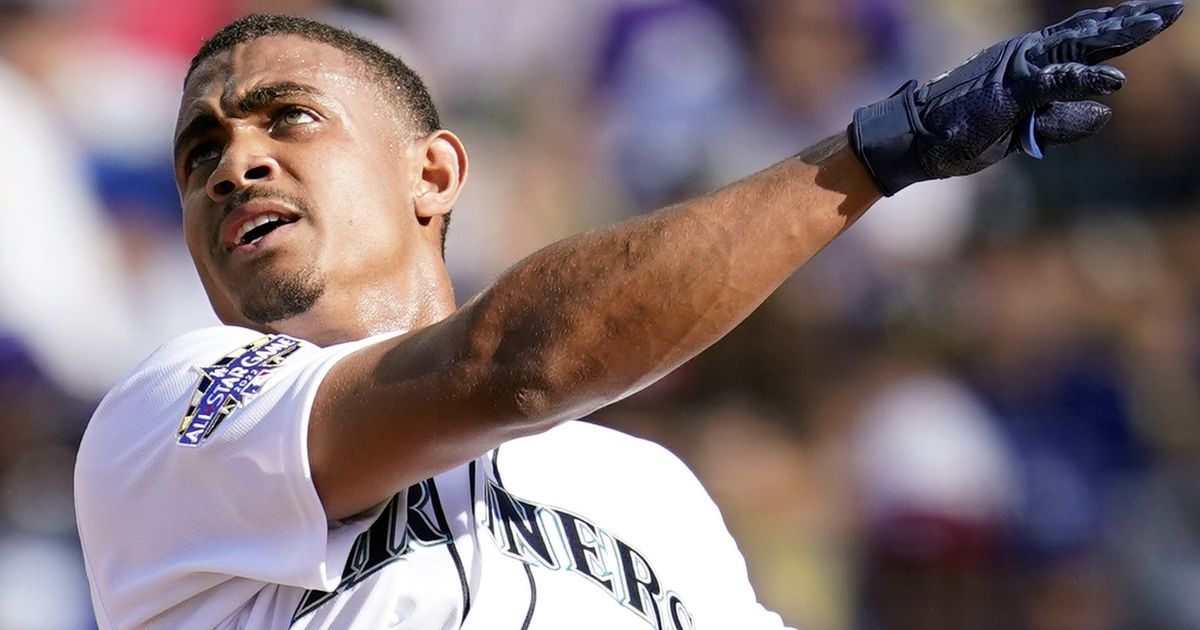 LOS ANGELES — The phenom and the 34th-round pick walked into the sunbaked mass of humanity on the plaza behind center field stands of Dodger Stadium.

Escorted by Kelly Munro, senior manager of Mariners baseball information, Julio Rodriguez and Ty France had arrived for the media availability earlier than their teammates on the American League All-Star team.

Clad in pristine white Mariners home uniforms, they drew the attention of the throng of media that had just finished up availability with the National League team and was looking for a new face.

The true dichotomy of the Mariners two All-Stars and their paths to baseball’s midseason mecca — the chosen one and the one who had been passed over for much of his career — couldn’t have been more pronounced in what followed.

“Julio, can you do an interview?” another asked.

More requests in his native Spanish were directed toward him.

Rodriguez’s light eyes danced in the attention, sparkling as much as his gold chain and diamond-encrusted No. 44 pendant in the sunlight. The electric smile, which Mariners fans see on a daily basis, was on full display.

He was in his element.

Named to the All-Star less than 24 hours before, replacing Mike Trout, who is dealing with back spasms, France walked quietly behind Rodriguez, nobody was hollering his name or asking for interviews quite yet. He didn’t mind being an amused spectator.

He teased his teammate, mimicking the photographers: “Julio! Julio!”

But he was there, too. An All-Star just like Rodriguez. For much of the season, he was the Mariners best player and the one who was expected to represent the Mariners. Admittedly, he felt hurt when he wasn’t selected in the initial process.

Now, he was here. It didn’t matter that he had to wait. A kid that grew up 30 minutes from Dodger Stadium, attending multiple games a year as a kid was there with players he watched growing up.

“It’s been crazy,” he said. “It’s all happened pretty fast. It hasn’t fully hit me yet.”

Rodriguez was ushered to his spot in the main island of the interview area, reserved for the stars, who were expected to have large crowds of media around them. He was on the same row as Vladimir Guerrero Jr. Nearby, Shohei Ohtani had his own special area, engulfed by media — the largest of any player for both teams.

“This is amazing,” Rodriguez said of the experience. “It’s a little bit better than I imagined. I talked with Trout. His locker was right by mine. I saw Aaron Judge. I saw Ohtani. It’s pretty amazing to be around all these guys.”

Meanwhile, France was taken to a small table with an umbrella on the edge of area. The table had spilled water and someone had left their glasses case.

“Are they nice glasses?” France joked.

But it was the wrong table. An MLB staffer, after checking to see his name, searched a map for his spot.

Was he being escorted to a spot next to Rodriguez? Like Bob Uecker moving to the front row in those old beer commercials?

France was moved to another small table with an umbrella not far from his rookie teammate. It was like sitting in the first row of coach and being able to see first class.

“Is there anybody more equipped to handle this than Julio?” he was asked.

France glanced to his left where his teammate was surrounded by reporters, answering questions in English and Spanish, laughing and, of course, smiling. Rodriguez looked totally at ease.

“He loves everything about this,” France said. “And he deserves every bit of it. His personality is perfect for this.”

It’s not to say that Rodriguez is rampant self-promoter trying to build his national brand or force a narrative about him through the media. Seattle fans know that game plan from football seasons past.

“It’s genuine,” France said. “He likes being Julio. I mean he should like it.”

France’s personality is typical laid-back California cool with a desire to interact with everyone. If you watch a game, any time a runner gets to first base, France is talking with them. And opponents like talking to him.

Kyle Seager joked last year that France was like a big friendly dog who everyone just wants to play fetch with. Perhaps it’s fitting that France and his wife, Maggie, got a golden retriever a few years back that believes the world was meant to pet her.

With Seager’s departure and following his lead, France has commandeered the role of team “smart ass.” He can and will tease and torment any of his teammates. He has comments, all of them good-natured, but also meant with a purpose of reminding them they are part of the collective “we” that is the Mariners.

“I think you know who I am and how I do things,” he said. “I don’t care if it’s you or Julio Rodriguez, I’m going to be the same guy regardless.”

Maybe it’s easier to be the same guy when for much of your baseball career he was seen as just “some guy” who could hit.

“No, he can really hit,” former teammate Manny Machado said. “He shouldn’t have had to wait to be here.”

Part of what makes Rodriguez’s endearing to his teammates is his ability to not take himself too seriously. He is quick to laugh at himself, particularly when teammates give him a hard time. The perfect example was when he tripped trying for a triple and tried to dog-paddle through the dirt to third base — failing miserably. When teammates drew a chalk line and got him water wings, Rodriguez happily posed for pictures.

“This game is supposed to be fun,” Rodriguez said. “I thought it was funny.”

But it’s the seriousness with which Rodriguez treats the preparation, how hard he plays and how he performs endears himself to teammates.

“One of my favorite things about Julio is that when he struggled, it was the amount of confidence that he had in not only the team, but himself,” France said. “A lot of young guys don’t have that. I know I didn’t when I came up. What he’s been doing and how at 21, he’s able to slow the game so much and how mature he is, it’s just special.”

While Rodriguez seemed ordained for greatness almost immediately after signing as 16-year-old out of the Dominican Republic, becoming a prospect darling over the last few seasons, France was never a prospect despite gaudy numbers.

After putting together three solid years at San Diego State under head coach Tony Gwynn, he expected to be drafted somewhere in the third to seventh round in 2015. Instead, injury concerns and a lack of a true position, dropped his stock. He wasn’t taken until the 34th around.

“I’ve always played with a chip on my shoulder,” he said. “I feel like my entire baseball career I’ve kind of been overlooked and just kind of use that as fuel to get to where I am today. And you know, it’s all paid off.”

But it was the trade to the Mariners in midseason 2020 that allowed him to blossom. Asked where he would be in his career without the opportunity the Mariners provided, France grew serious. He was blocked in San Diego.

“I’ll be honest, I don’t know,” he said. “I loved my time in San Diego, but who knows where my baseball career would be. I would be in the same spot [still blocked]. I’m very grateful to be here right now.”

Inside the Beltway: Student-debt cancellation prompts…