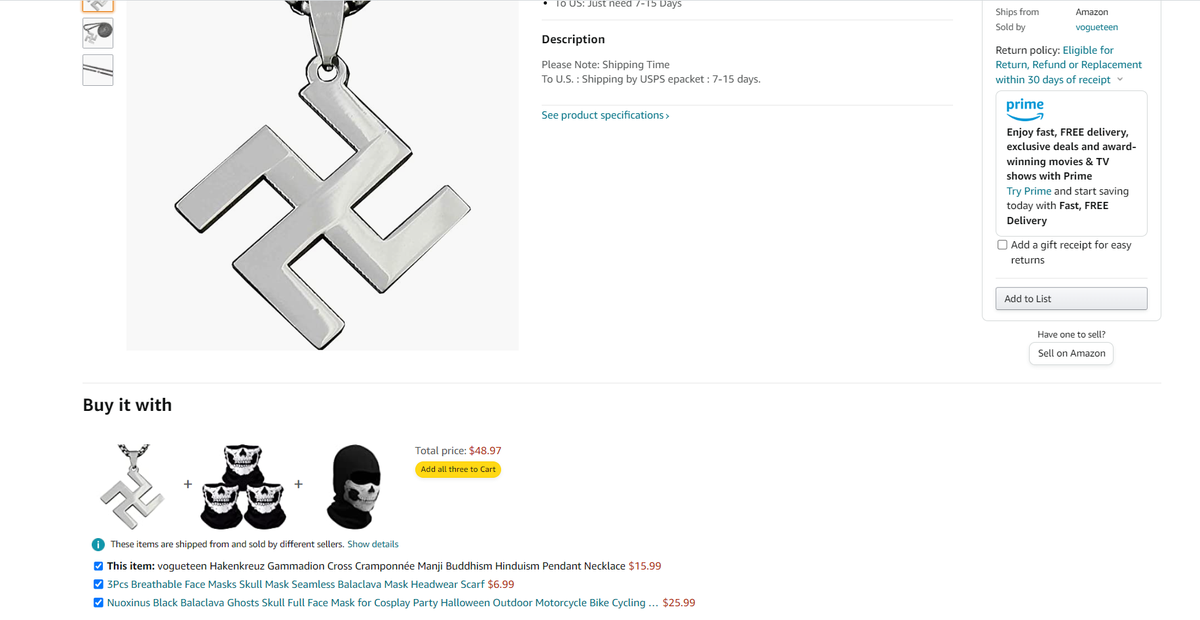 mazon has removed Nazi items from its site after being called out by a Jewish human-rights group.

The latest bout of removals is part of an ongoing dispute between the SWC and Amazon that stretches back almost five years. A year ago, the e-commerce giant removed 20 Nazi propaganda films, many of which were made by German filmmaker Leni Riefenstahl, at the behest of the SWC.

At the time, the human-rights org said the films should only be viewed in a history class where educators can “expose the lies of Nazi Germany, its violent racist ideology, and its genocidal hatred of the Jewish people”.

In 2017, the SWC wrote to Amazon founder (and then CEO) Jeff Bezos to object to Amazon Germany’s sale of a book that perpetuated a Jewish conspiracy theory. In 2020, the human-rights group asked then-UK education minister Gavin Williamson to act against Amazon’s sale of Nazi texts calling for the killing of Jews.

As part of its latest purge, Amazon has taken down several of the items, but similar products were still on the site last Friday, according to Gizmodo.

Amazon did not comment on the removals. Its shopping site is home to both its own products, from private-label clothing to electronics, and items sold by third-party sellers. The company made $28.7 billion (£23.5 billion) from third-party sellers in the third quarter of 2021, up 18 per cent over the previous year.

“Amazon is the nation’s go-to online store for every imaginable product,” said Rabbi Abraham Cooper, associate dean and director of Global Social Action at the SWC.

“In an era when 63 per cent of all religious-based hate crimes in America target America’s Jews — 2.4 per cent of the US population – at a time when Blacks are again the number one target of race-based hate crimes, Amazon should not be using its business model to market hateful symbols and neo-Nazi paraphernalia.”

Amazon’s offensive and controversial products policy forbids items that promote, incite or glorify hatred, violence, racial, sexual or religious intolerance, or promote organisations with such views. The rules apply to all products except books, music, video and DVD. It also removes listings that graphically portray violence or victims of violence.

Amazon describes its moderation systems as being proactive enough to “catch offensive listings before a customer ever sees them”, though clearly that isn’t always the case.

“Our technology continuously scans all products listed for sale looking for text and images that we have determined violate our policies, and immediately removes them,” the company’s policy reads. “In addition to reviewing information from sources such as customer-service contacts, social-media posts, and the press, our teams ‘walk the store’ every day, proactively looking for potentially offensive products.”

Clearly, swastikas and similar Nazi hate images are not being picked up, although the products were variously described as being a Kolvrat knot or Hindu symbol rather than a swastika, or ‘pirate skull crossbones’ for the death’s head insignia, among other, similar descriptions.

Analysis: In Paris, Quin Snyder briefly gets back to work