Analysis: The Suns are on the brink, and not in a good way 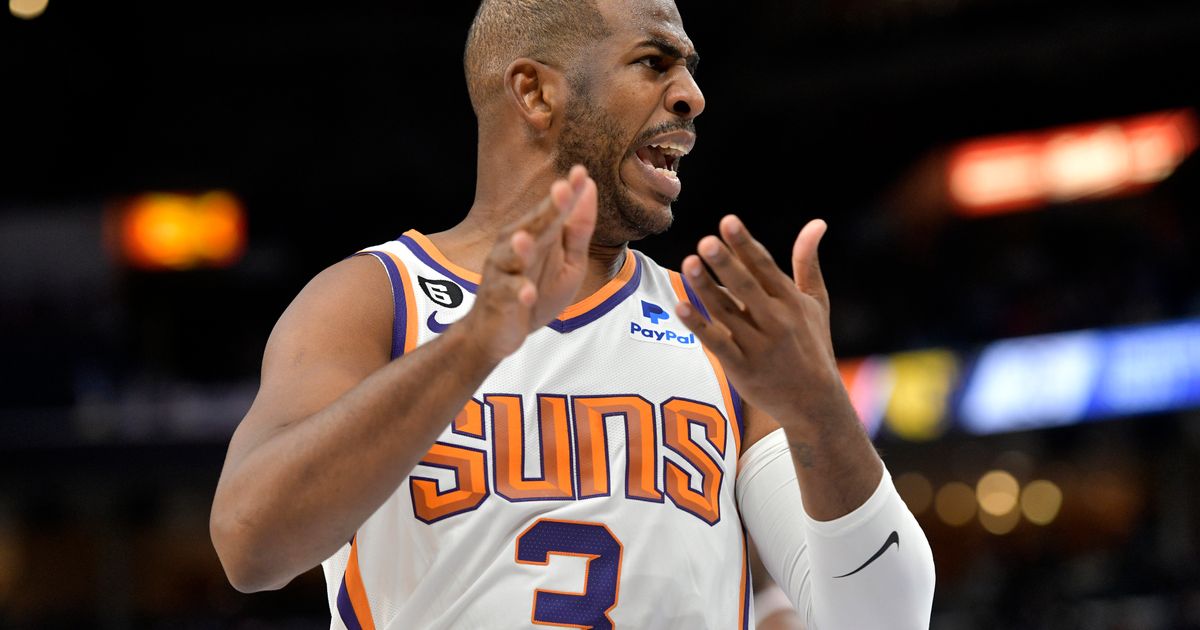 Only 18 months ago, the Phoenix Suns were on the brink. They held a 2-0 lead over the Milwaukee Bucks in the NBA Finals. They were two wins away from the parade. Chris Paul was finally going to get his ring. Suns in Four was not just a stadium chant, but a very real possibility.

They’re on the brink again now.

A team that lost 18 games in the entirety of the 2021-22 regular season lost its 18th game of this regular season — with 44 games left to play — on Monday, a 102-83 embarrassment at Madison Square Garden to New York, and the score makes it seem closer than it really was. It was really over with 4:30 left in the first half, the Knicks then holding a 52-20 lead.

Phoenix managed its fewest points since November 2018, a span of 372 games, including playoffs. The bigger issue was the lack of … well, whatever has set the Suns apart over the last two-plus years.

Over the last four weeks, the Suns are 4-11; only Charlotte, at 3-12 in that span, has been worse. In fairness, Phoenix is missing Devin Booker, who was playing at an All-NBA level and is likely going to be sidelined a few more weeks with a left groin strain. But it wasn’t exactly going perfectly when Booker was healthy, either.

Some things have gone as expected, or better than expected, in the NBA so far this season. League-leading Boston hasn’t missed a beat because of Ime Udoka’s suspension and Joe Mazzulla taking over as interim coach. New Orleans and Memphis had high hopes after the way they finished last season; right now, they’re both among the best in the Western Conference. Brooklyn, when there’s no drama, has been as good as anyone in the NBA. Milwaukee, the team that beat the Suns in those 2021 NBA Finals, looks poised for a deep postseason run.

And then there’s the surprises of the not-good variety. Phoenix is 20-18 with three games left until the season’s midpoint. The Suns are in play-in tournament range and headed in the wrong direction. There’s still time, sure, but efforts like Monday don’t give much reason for hope.

Championship windows usually don’t close in an instant. It happened that way in Chicago in 1998 when Michael Jordan and Phil Jackson left the Bulls and the franchise started over after six titles in eight years. It could be argued it happened that way when LeBron James left Cleveland in 2010, Miami in 2014 and Cleveland again in 2018. What’s more typical, though, is a team tends to age out, fall apart, see the locker room bonds start to fade, or some combination thereof.

It might be all the above in Phoenix’s case. There’s an ownership change happening because of Robert Sarver’s boorish behavior; Mat Ishbia could be in place within the next few weeks. Allegations of the franchise having a less-than-professional workplace environment for some have been detailed thoroughly by ESPN in recent months. But the dysfunction hadn’t seemed to affect the locker room, until this year.

Jae Crowder — who has leadership skills that teammates from other stops in his NBA career rave about — has held out all season, remains under contract to the Suns on paper only and is clearly missed. Tension between Williams and past No. 1 overall pick Deandre Ayton has been aired publicly, which is never good. Perception might not exactly mirror reality there; a video shot from the stands of a Phoenix loss to Washington in December seemed to show Williams and Ayton getting heated during a time-out, but what was really happening was Ayton was having a back-and-forth with teammate Mikal Bridges and Williams wanted them both to shut up.

“We were just going at each other,” Bridges said. “I apologized to him.”

Regardless, it wasn’t a happy huddle. The Suns haven’t had many of those in a while.

“Mentally and emotionally, I’ve got to get our guys stronger,” Williams said.

Nobody over the last 2-1/2 seasons has a better regular-season record than the Suns and it isn’t close — they’ve won 70% of their games in that span, Philadelphia has won 64% to be second on that list. But this current version of the Suns looks nothing like a contender.

They’re 11-13 when Paul plays this season, 9-5 when he doesn’t, which may or may not tell anything. Williams loves the way he plays and sees him as a valuable volunteer assistant coach as well.

“Last year, I felt like we won, but we didn’t learn,” Williams said. “I love winning, but I think it’s a benefit to your program to continue to learn — and win. I think Chris understands that process better than most because he’s been on both sides of it. So, a lot of the things that I’m pushing as the coach, I can see him in film study like ‘Yep,’ shaking his head, and when the guys see him doing that, it’s better than me saying it.

“I think all of this is going to pay dividends for us, as we move forward,” Williams said. “If we learn.”

It’s a big if. And it’ll decide if the Suns’ window is closed or not.

Tim Reynolds is a national basketball writer for The Associated Press. Write to him at treynolds(at)ap.org

Can committing to 30 days of yoga change your life?