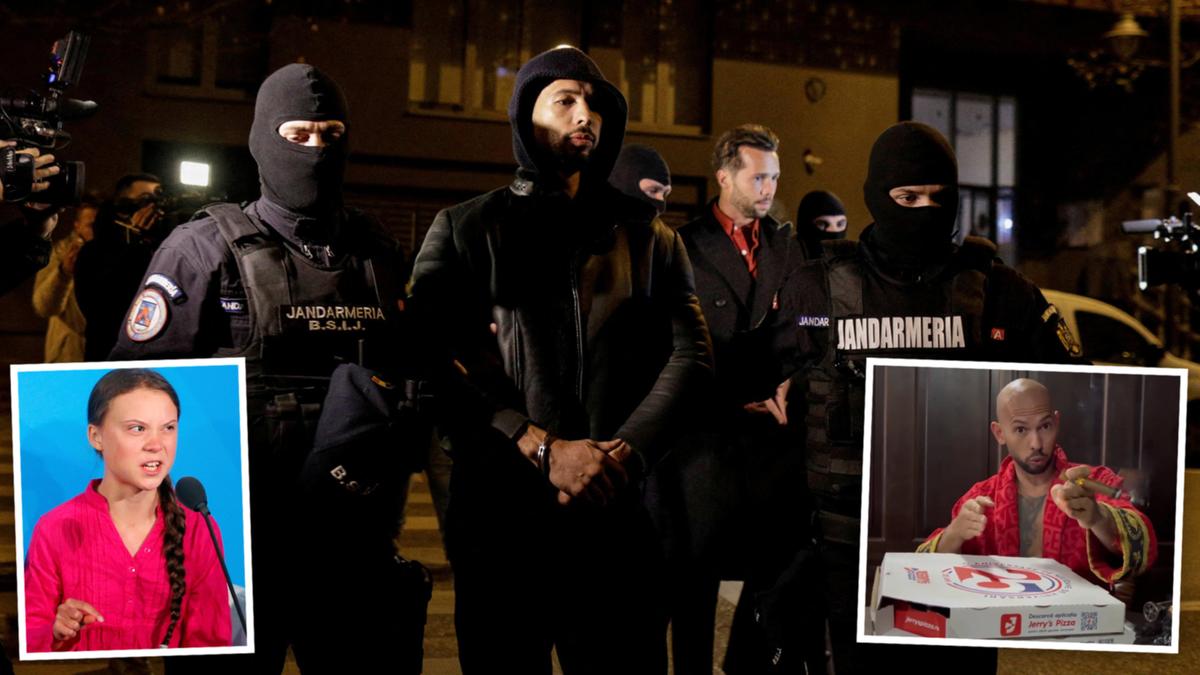 Divisive figure Andrew Tate has been arrested in Romania after he gave away his secret hideaway when he ordered pizza.

It is understood police raided his luxury home in Bucharest in connection with a human trafficking investigation, arresting Tate and his brother Tristan.

It is believed Tate’s online feud with climate activist Greta Thunberg tipped off authorities to his whereabouts.

After taunting Thunberg in a Twitter post where he bragged about his “enormous emissions” car collection, the 19-year-old Swede responded with an epic burn, signing off with: “Email me at [email protected]”

Unable to help himself, Tate responded with another video showing a pizza from Romanian chain Jerry’s Pizza.

Sources close to the investigation told local news publication Gandul that anti-mafia prosecutors learnt where Tate and his brother were living through their social media activity.

In fact, police may have tracked down the pair after they ordered the pizza, leaving their address.

Tate and Tristan were pictured being led away in handcuffs following an investigation for the alleged kidnapping of two young women in their villa in the town of Voluntari in April.

Warrants were issued for the brothers in relation to forming an organised criminal group, international human trafficking and rape.

Two other suspects, including a female police officer, were also arrested.

Tate, banned from many social media platforms for misogynistic comments and hate speech, and Tristan will be detained for 24 hours, prosecutors from the anti organised-crime unit said.

Prosecutors said they had found six women who had allegedly been sexually exploited by the suspects.

“The four suspects … appear to have created an organised crime group with the purpose of recruiting, housing and exploiting women by forcing them to create pornographic content meant to be seen on specialised websites for a cost,” prosecutors said.

“They would have gained important sums of money.”

In the past, Tate — who was born in Chicago in the US but was brought up in Luton in Britain — has said women are partially responsible for being raped and that they belong to men.

In a deleted video on his YouTube channel, Tate — a former kickboxer who found infamy on Big Brother in 2016 — claimed “40 per cent of the reason” he moved from the UK to Romania was because Romanian police were less likely to pursue rape charges.

“I’m not a rapist but I like the idea of just being able to do what I want. I like being free,” he said.

Since then, he has gained further notoriety for a string of misogynous comments.

And on Wednesday, Tate lit the fire with Thunberg, who gave him a right royal roasting.

“Hello @GretaThunberg,” he wrote alongside a glamour picture of the former kickboxer refuelling a bronze car.

“This is just the start.

“Please provide your email address so I can send a complete list of my car collection and their respective enormous emissions.”

It prompted Thunberg into a classic reply: “Yes, please do enlighten me. Email me at [email protected]”

The epic burn unleashed a deluge of love for the teenager — and appears to have brought about the downfall of Tate.