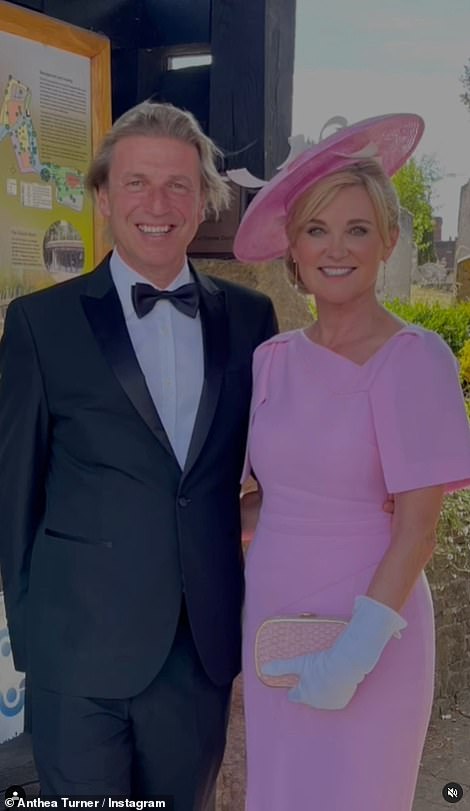 Delighted Anthea Turner shared a reel of pictures and videos on Instagram on Monday as her stepdaughter Amelia married her Gloucester rugby husband Freddie Clarke.

PR & Events Manager Amelia, 29, is Anthea’s stepdaughter from her marriage to Grant Bovey – who she remains friends with despite their bitter divorce – he could be seen walking his daughter down the aisle. 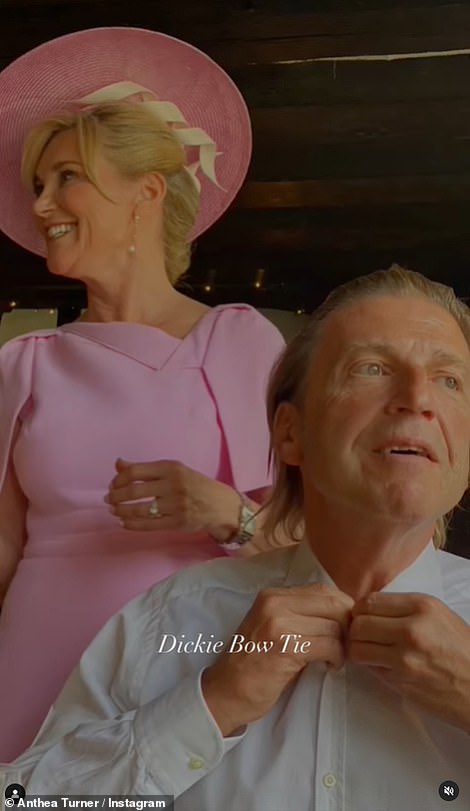 ‘A truly magical day’: Anthea Turner wore a chic pink dress as she and fiancé Mark Armstrong celebrated her stepdaughter Amelia’s Gloucestershire wedding to rugby beau – and she reunited with ex Grant Bovey 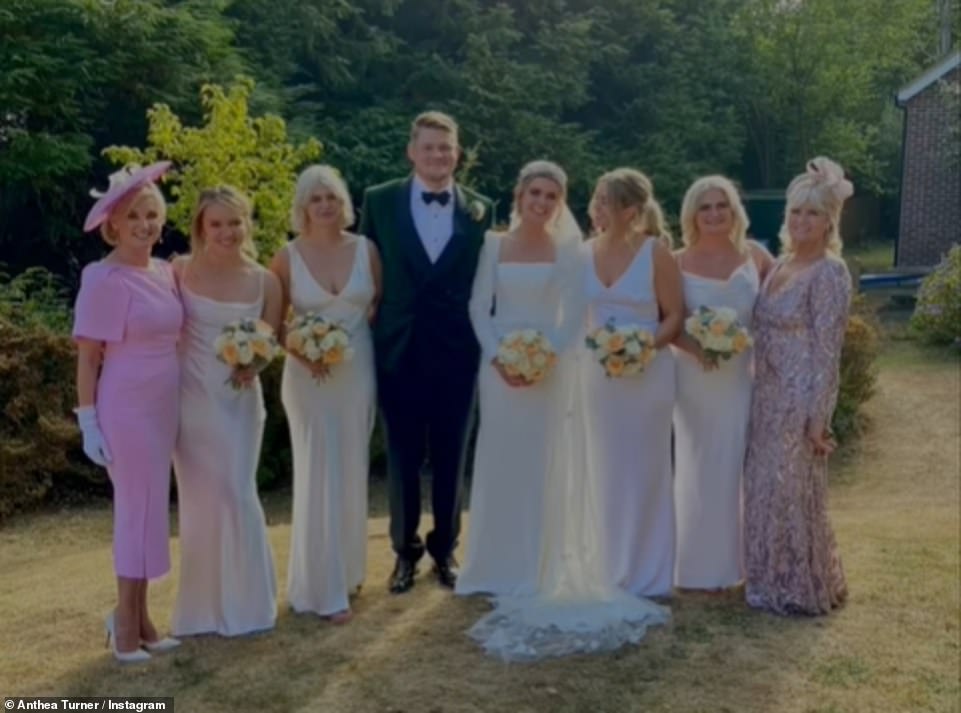 Family shot: Anthea joined the bride and groom for a picture in the grounds of the church 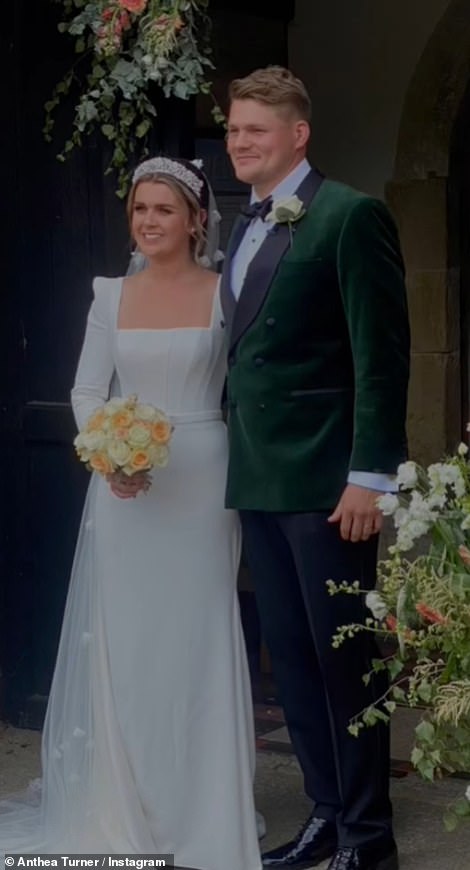 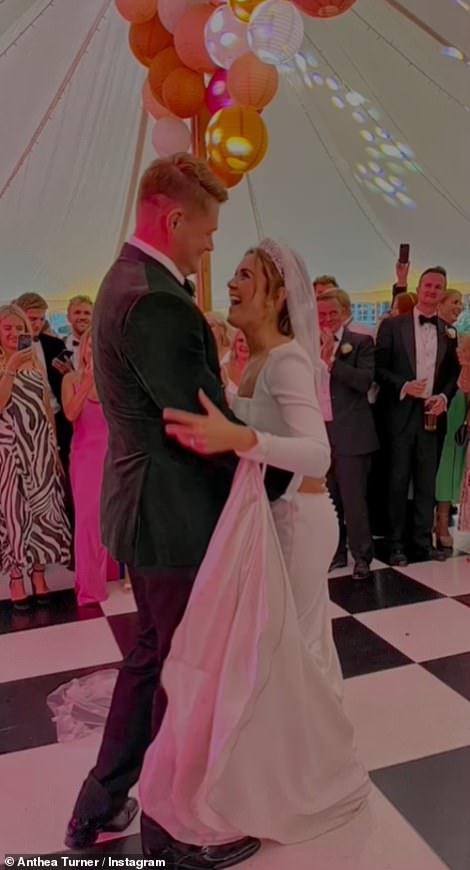 Here comes the bride! PR & Events Manager Amelia, 29, is Anthea’s stepdaughter from her marriage to Grant Bovey – who she remains friends with despite their bitter divorce

Anthea is also stepmother to his daughters, Lily, 30, and Claudia, 26.

The reel showed the bride wearing a stunning Suzanne Neville dress as she danced with her husband in a lavish looking marquee topped with balloons, with Anthea calling it a ‘truly magical day.’

Amelia and Freddie got engaged on November 2, 2021, during a beach walk, with Freddie sharing a snap of the moment and writing: ‘A day we will never forget. Love you ❤️ @ameliabovey.’

Anthea also shared a snap of herself en route to the wedding, trying to not crease up her dress in the car. Then later, she showed the bridesmaids excitedly constructing a wedding cake out of blocks of cheese.

The reel ended with a picture of Mark at the end of the night with a fascinator on his head after celebrating in style. 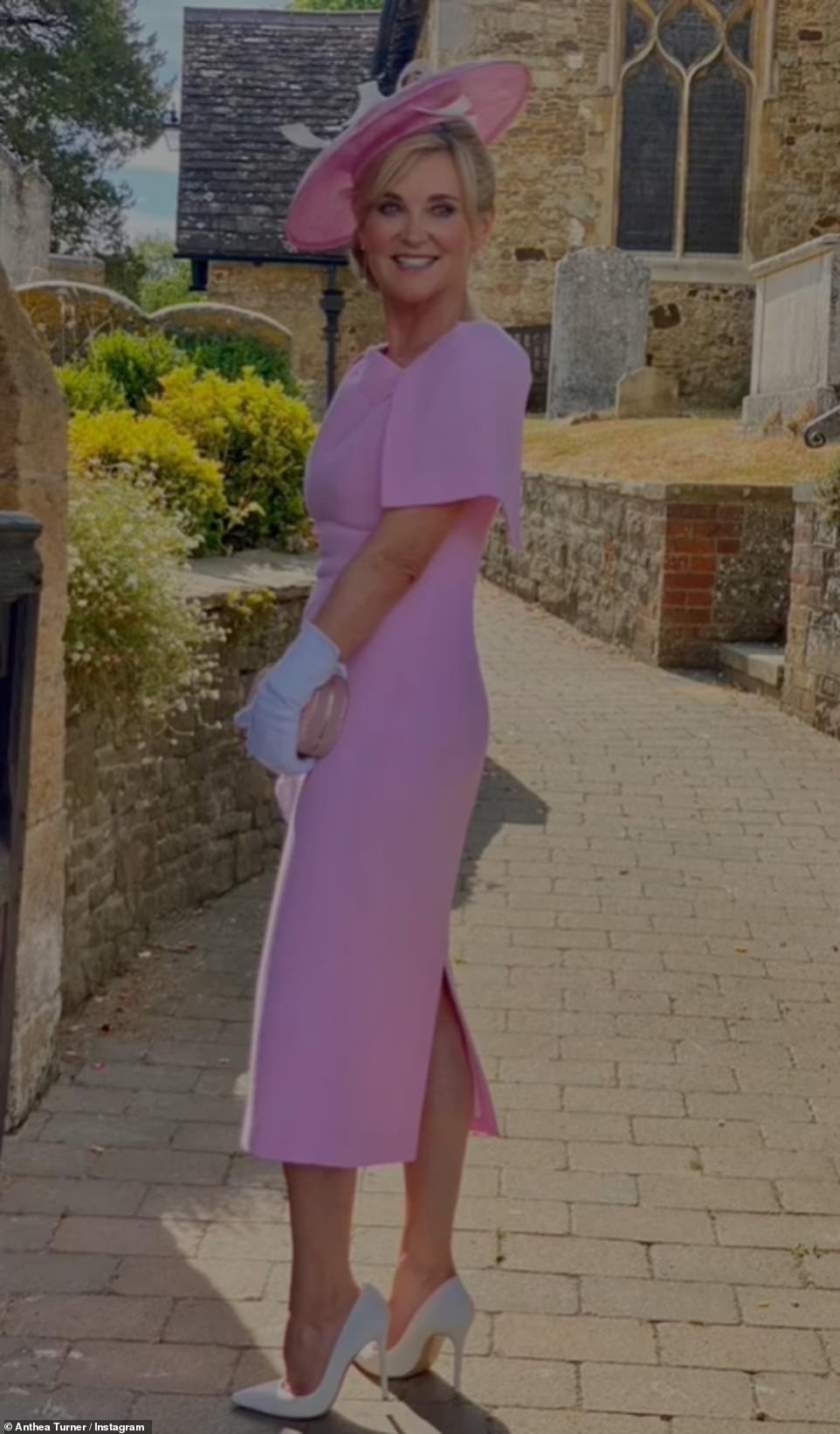 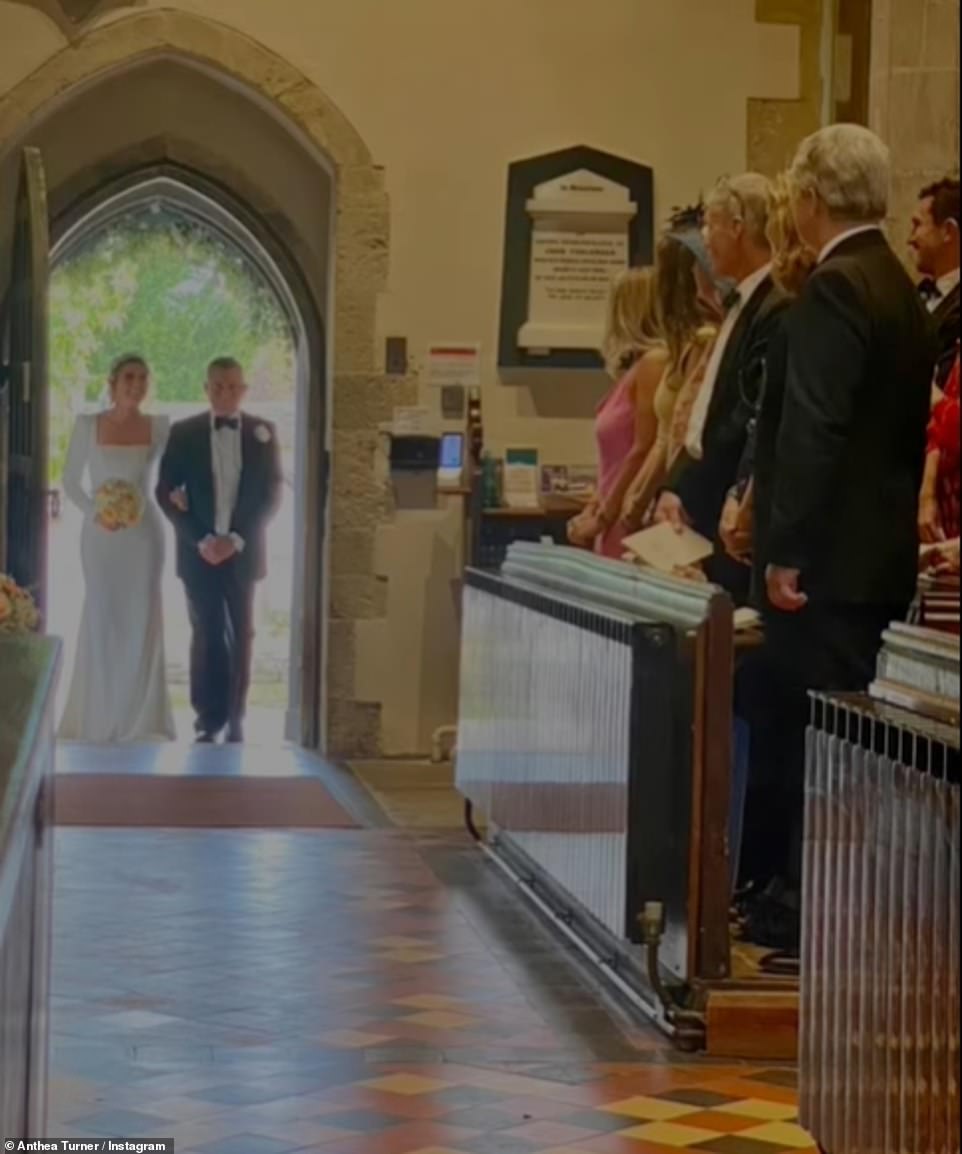 No bad feelings: Anthea’s ex, Grant Bovey could be seen walking his daughter down the aisle 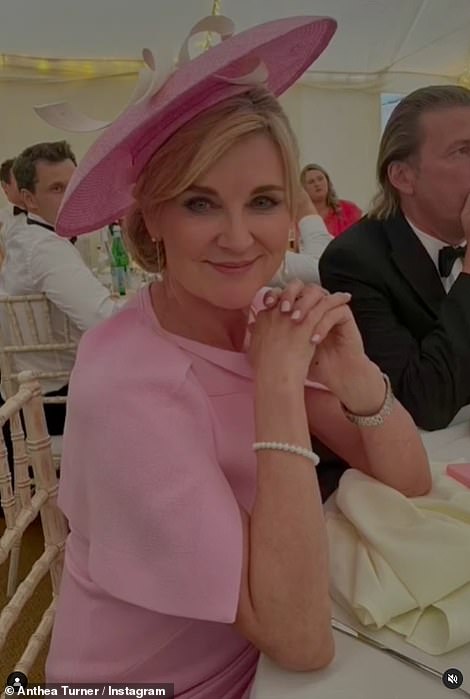 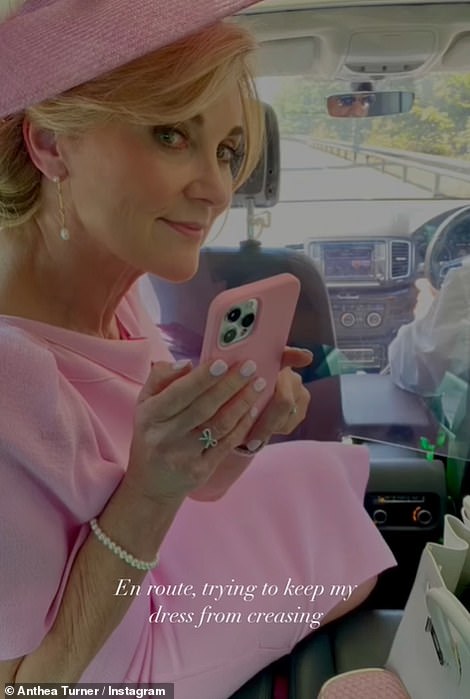 Making memories: Anthea posed for snaps at the wedding breakfast as she sat alongside Mark

Sharing the reel, Anthea wrote: ‘Had a truly magical weekend celebrating the marriage of my beautiful stepdaughter @ameliabovey and her fiancé (now husband) @freddieclarke1.

‘Every time I looked at them they were smiling the biggest smile their love and warmth was infectious. 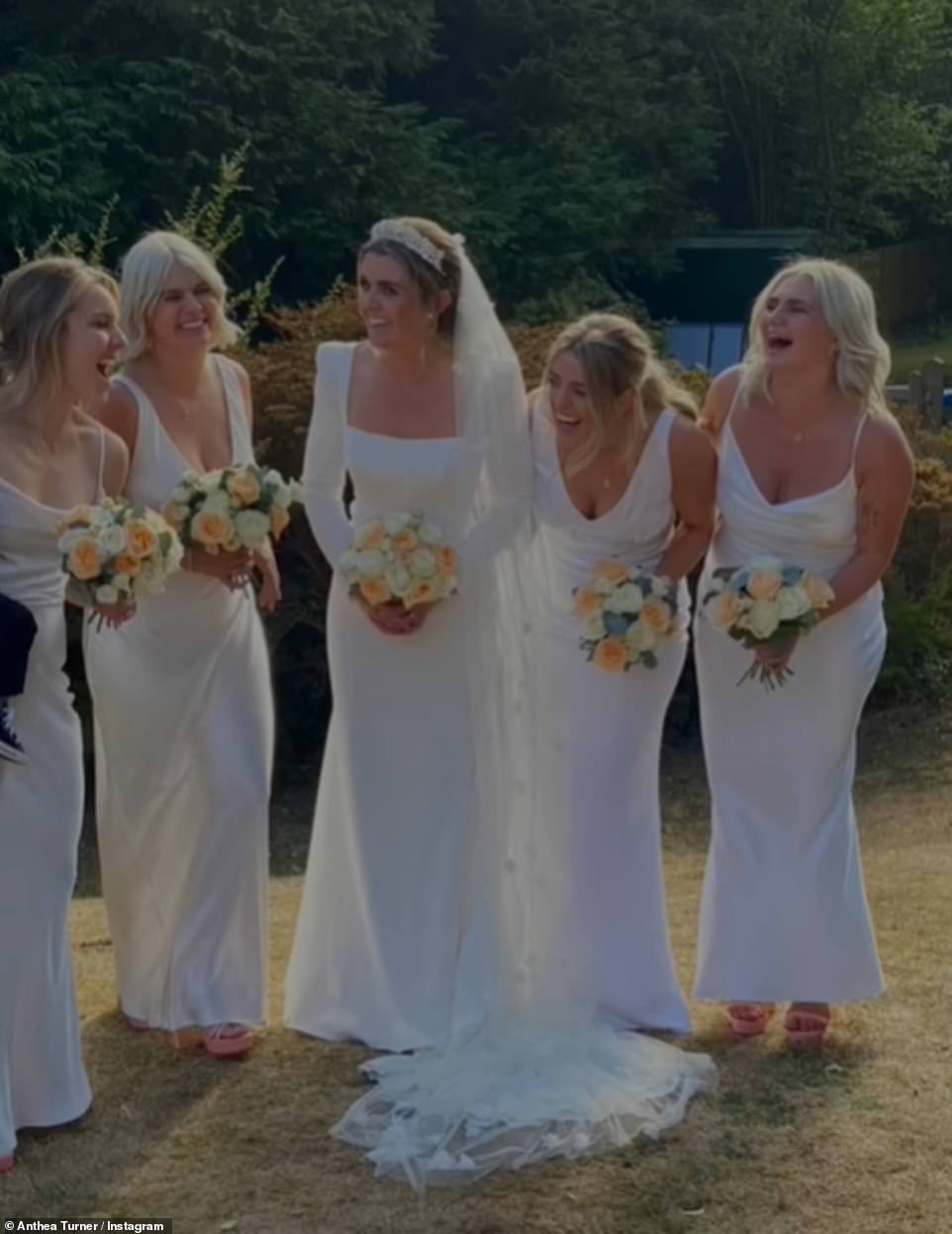 Absolutely beautiful: She shared some stunning snaps of Amelia and her stunning bridesmaids 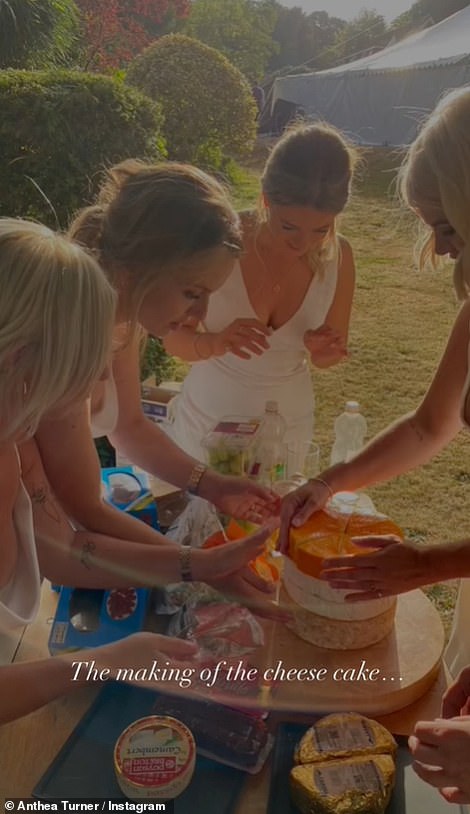 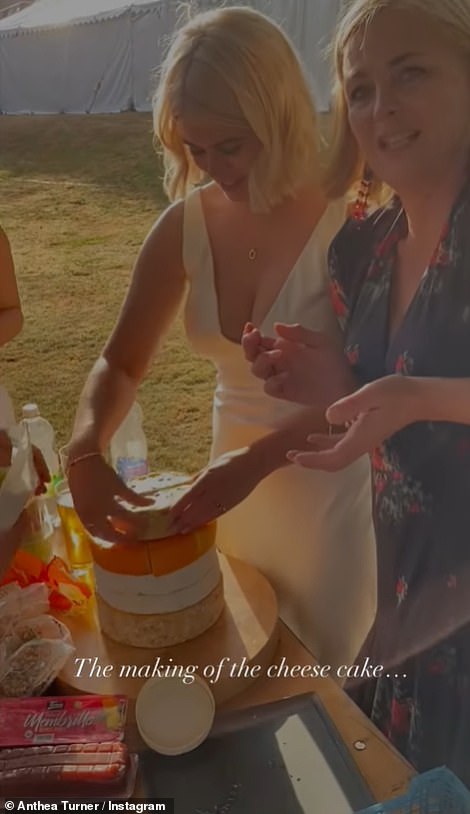 Who needs a sponge? The bridesmaids appeared in high spirits as they assembled a last minute cake out of blocks of cheese 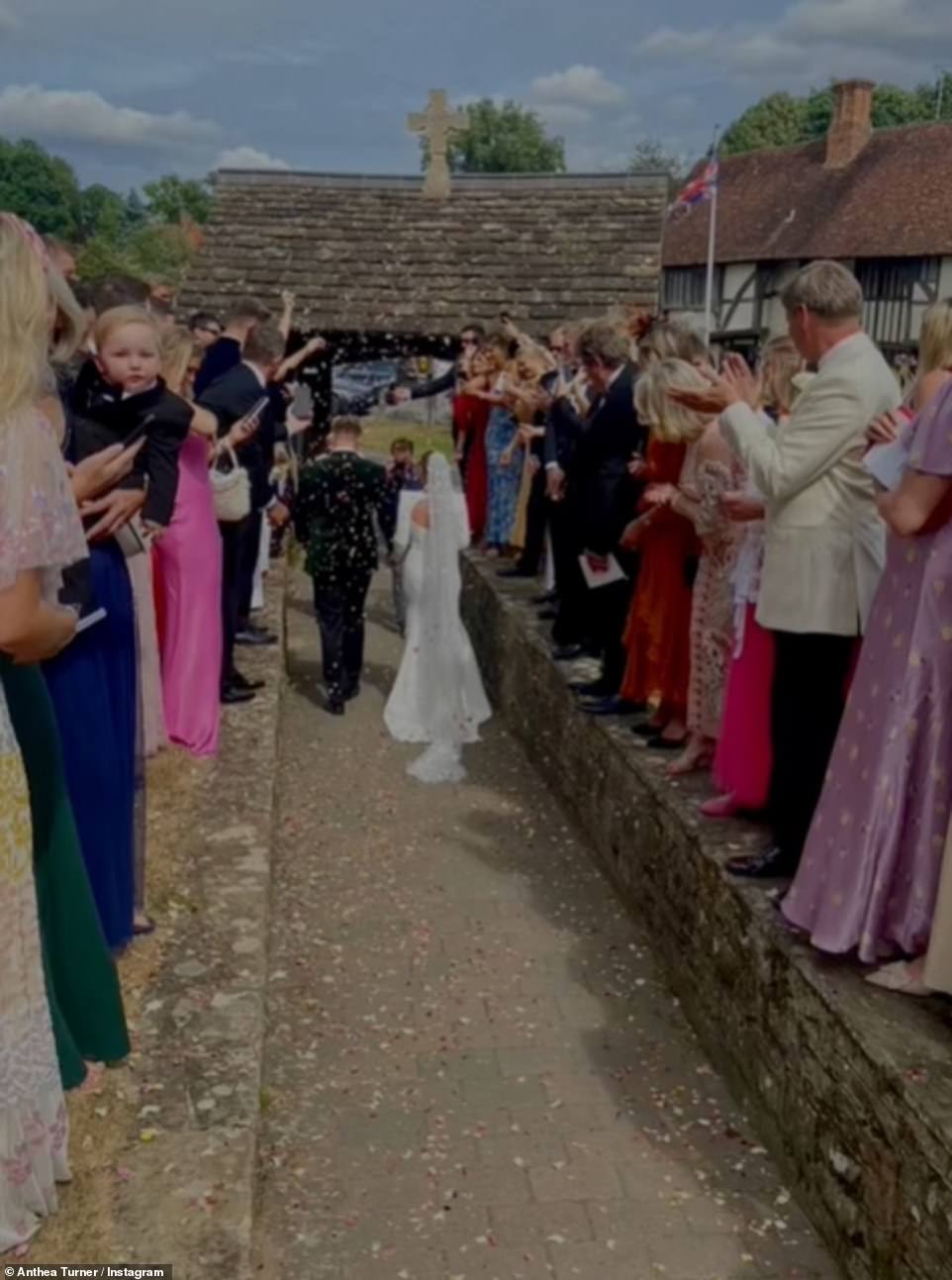 They DO! The bride and groom were pictured leaving the church and were covered in confetti 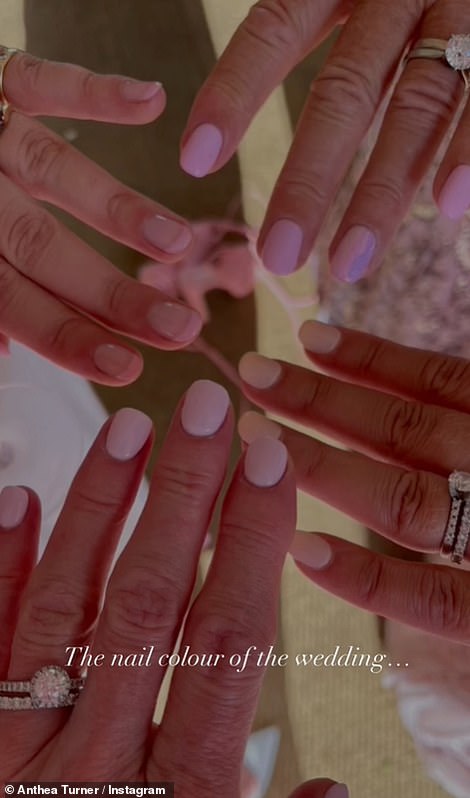 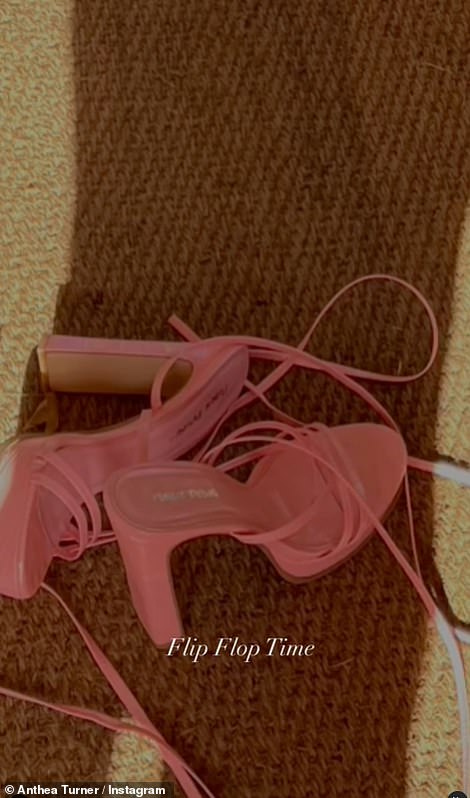 The nail colour of the wedding: Anthea shared a snap of all the matching manicures as she shared details from the day 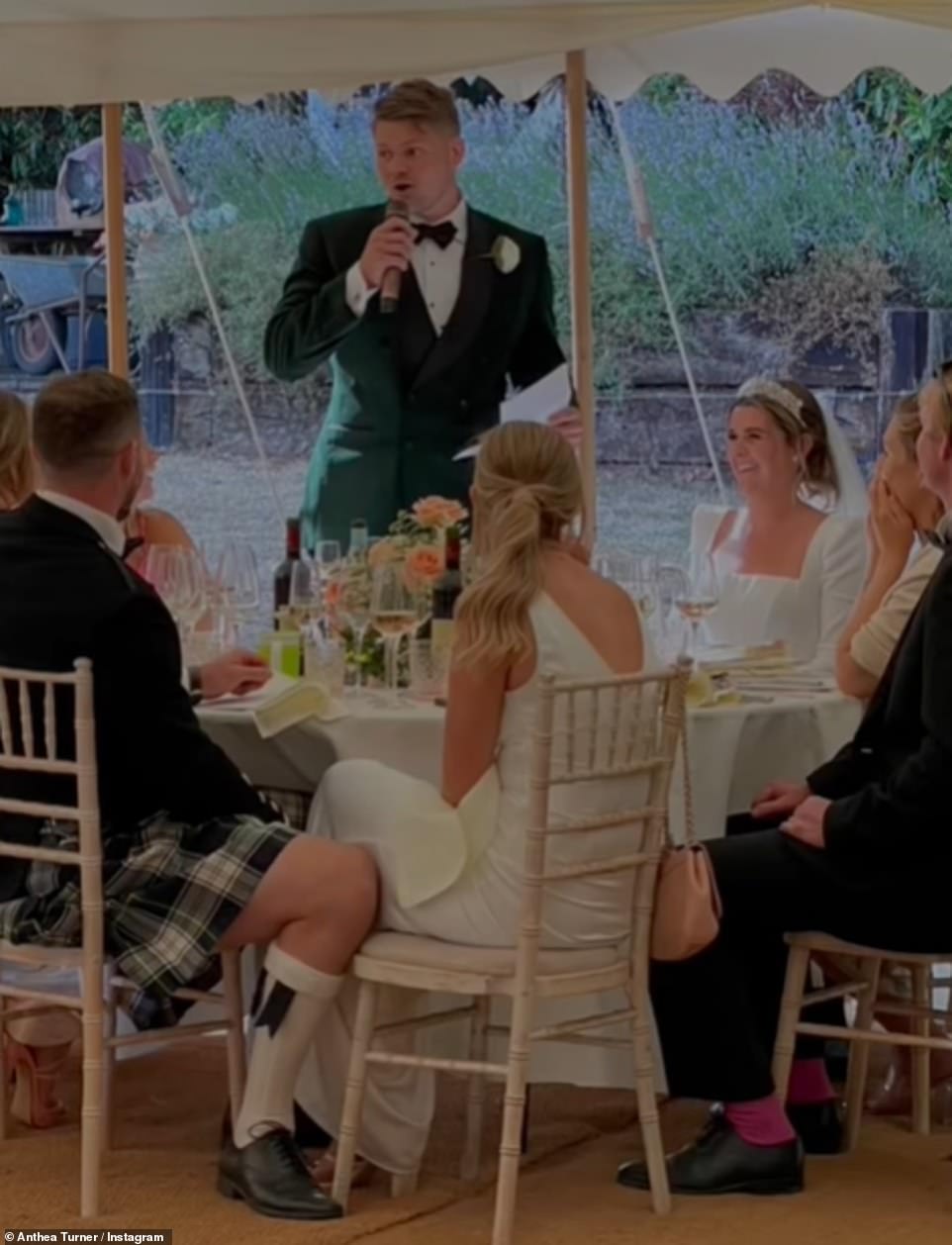 Time for the speeches: Rugby player Freddie drew smiles as he gave a speech from his table 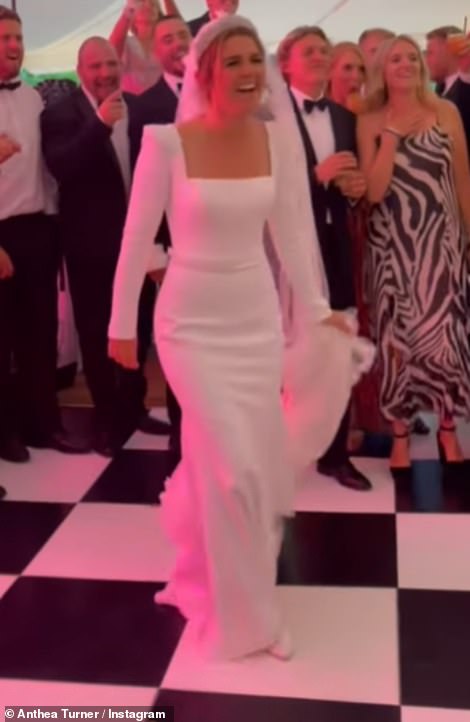 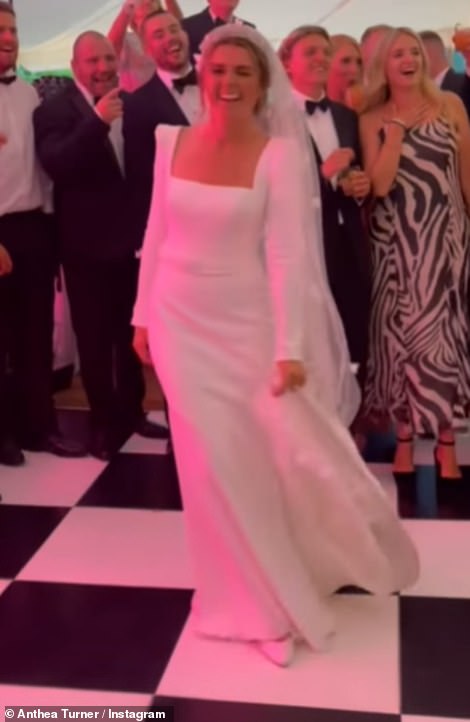 ‘Thank you. Will post a few more fun getting ready shots with @linocarbosiero over the next few days but don’t we all love a wedding.’

Anthea married Grant on August 23, 2000. They initially split up in 2012 as a result of his infidelity after she discovered that the businessman, then 52, was having an affair with interior designer Zoe de Mallet Morgan – 24 at the time.

They soon reconciled – only to split permanently in 2013 after 13 years together.

In her book, Anthea describes how she read his text messages, checked his sat-nav and even tracked his bike rides in order to expose his lies. Her discovery came less than a year after she had forgiven him for an indiscretion with another woman.

But Anthea once told Closer magazine that her stepdaughters are incredibly important to her.

She said: ‘The girls are a beacon of light in my life and I love them. When you’re a step parent you appreciate it more – maybe because it’s not an “umbilical cord relationship” and you’ve had to work at it. 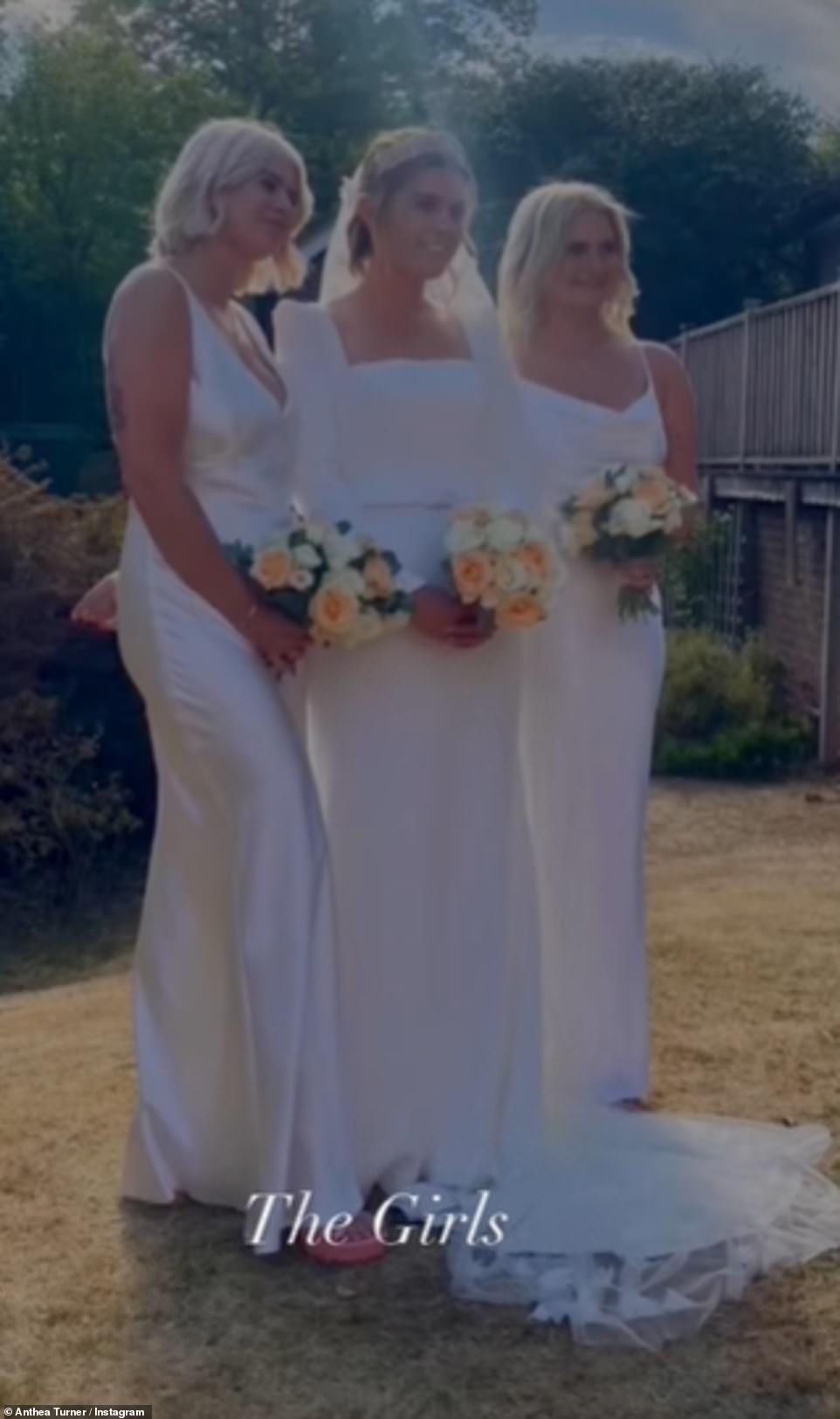 Beautiful: The bride and bridesmaids all looked absolutely stunning in their satin ensembles 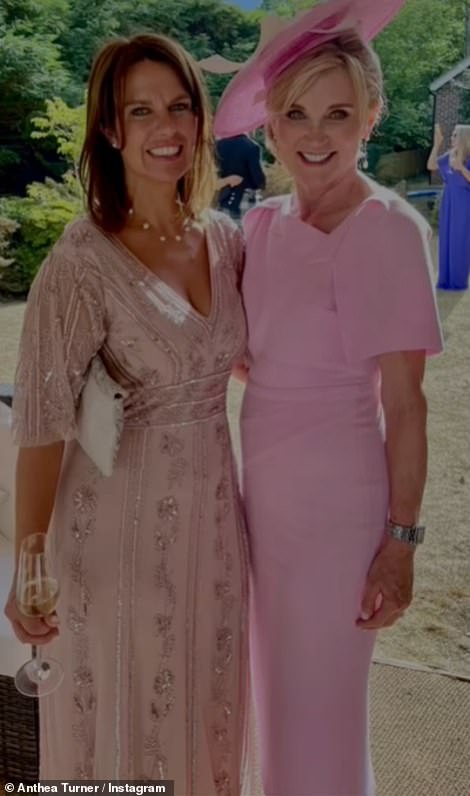 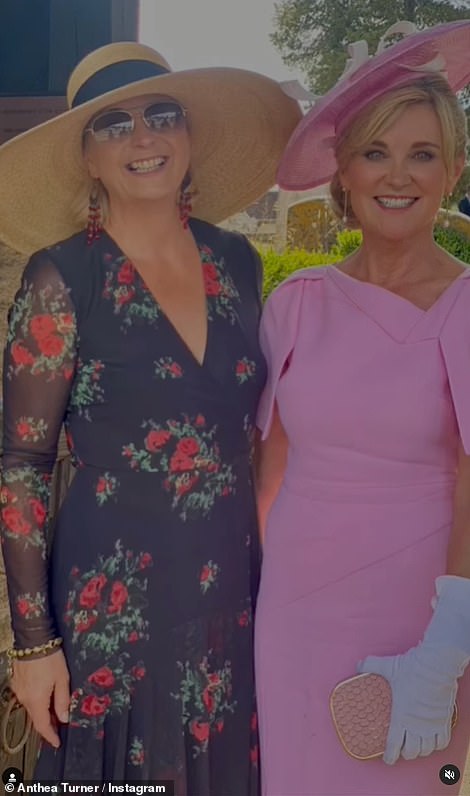 On the guestlist: Anthea seemed to have lots of pals in attendance as she posed for a slew of snaps 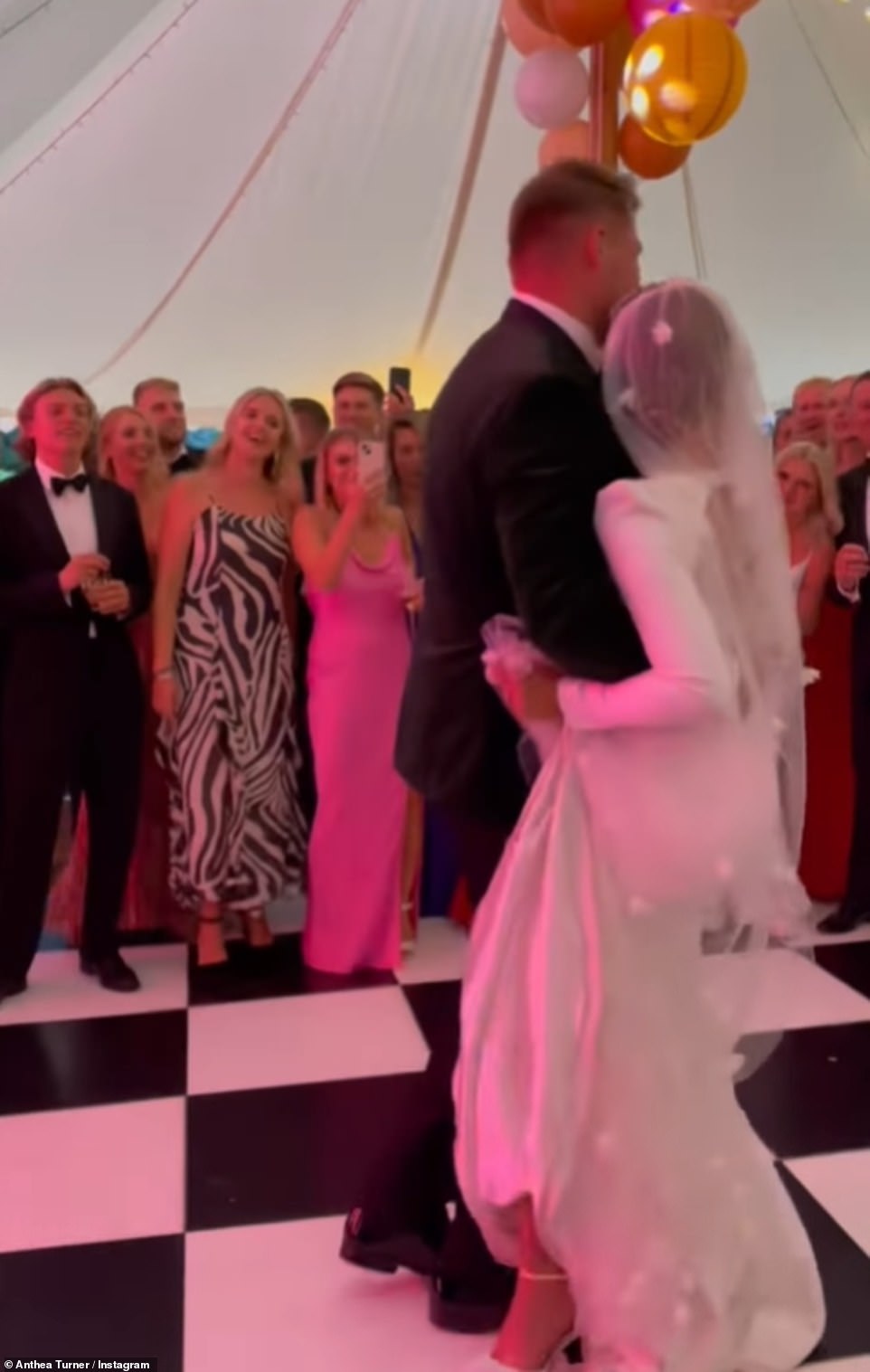 Anthea once told Closer magazine that her stepdaughters are incredibly important to her. She said: ‘The girls are a beacon of light in my life and I love them. When you’re a step parent you appreciate it more – maybe because it’s not an “umbilical cord relationship” and you’ve had to work at it’

‘Now that I’m no longer married to their father, we’re in each other’s lives because we choose to be and that’s special.”

The star – who was also previously wed to DJ Peter Powell – opened up on the moment Grant first told his girls he was splitting from their mother Della, and Anthea admitted the situation might have been tougher if they’d met her as teenagers.

She explained: ‘I remember Grant talking to the children about him slitting with their mum and they were very accepting. I think it was easier because they were so little. I’m sure if I’d been walking into a situation with teenage girls, it would have been different.

‘It’s important the adults put aside their personal feelings. It’s the one thing Grant, Della and I did – we worked hard for the children because it’s all about them.’ 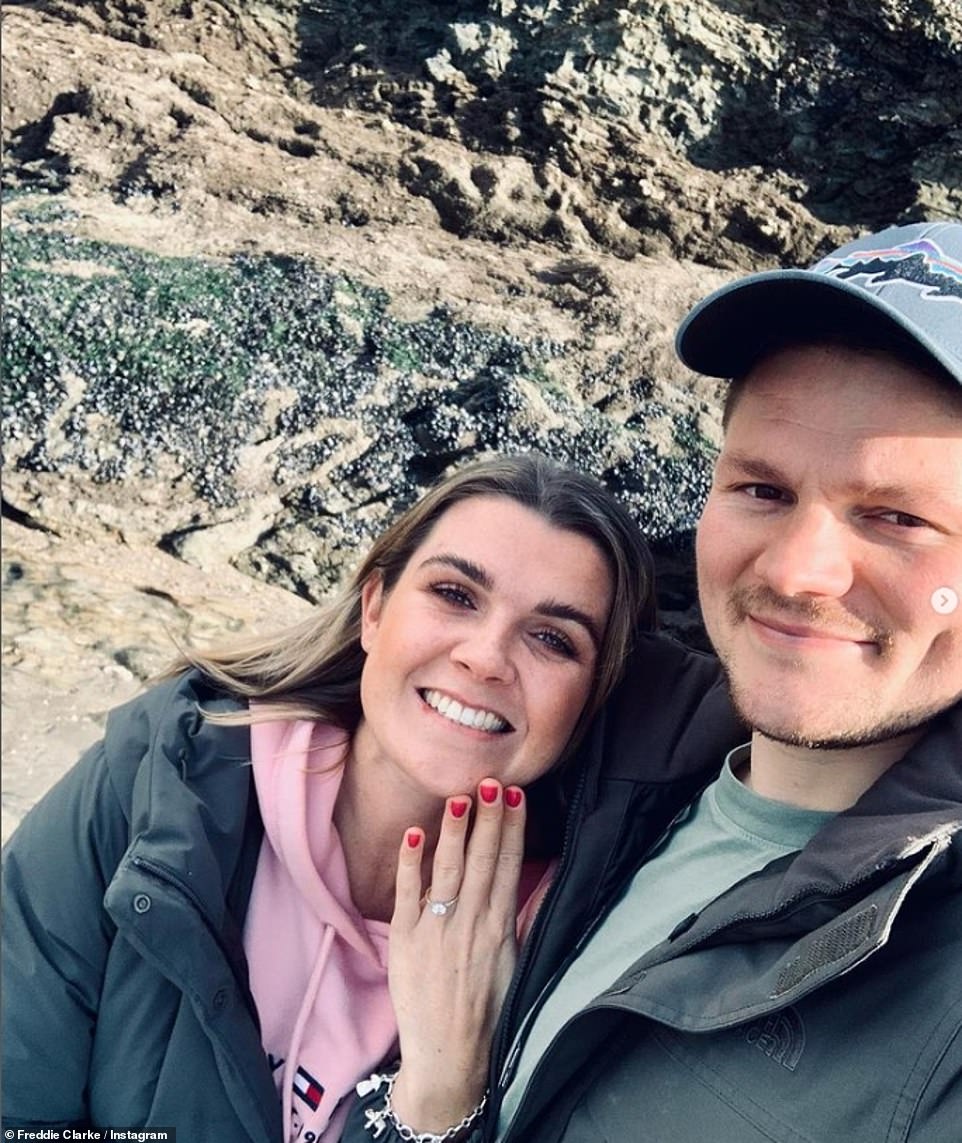 So sweet: Amelia and Freddie got engaged on November 2, 2021, during a beach walk, with Freddie sharing a snap of the moment and writing: ‘A day we will never forget. Love you ❤️ @ameliabovey’ 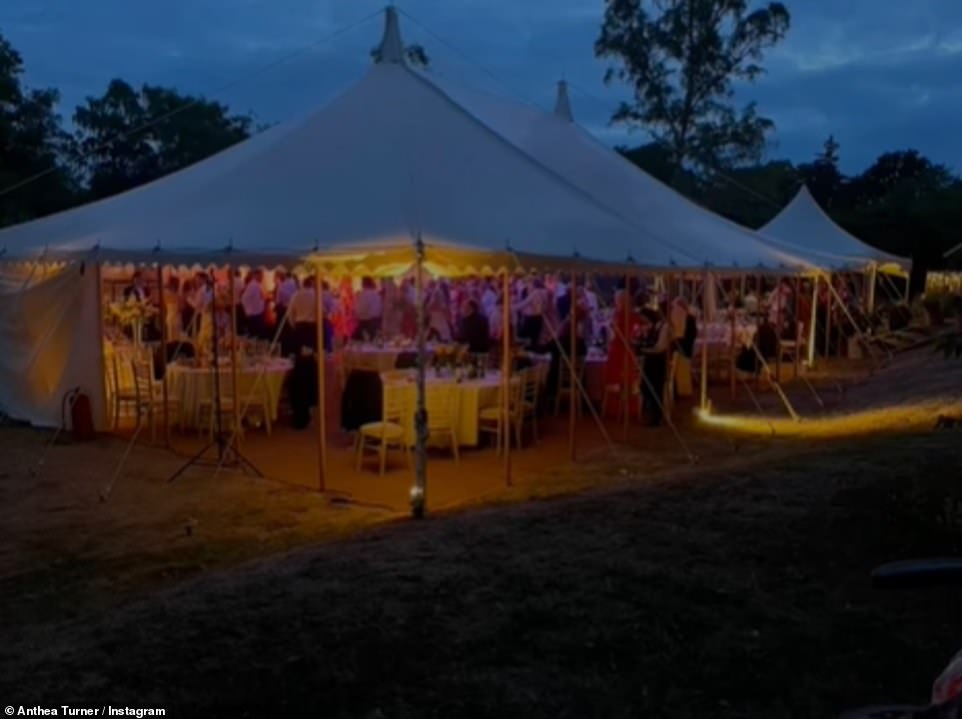 The scene: Anthea also snapped a picture of the marquee from the outside 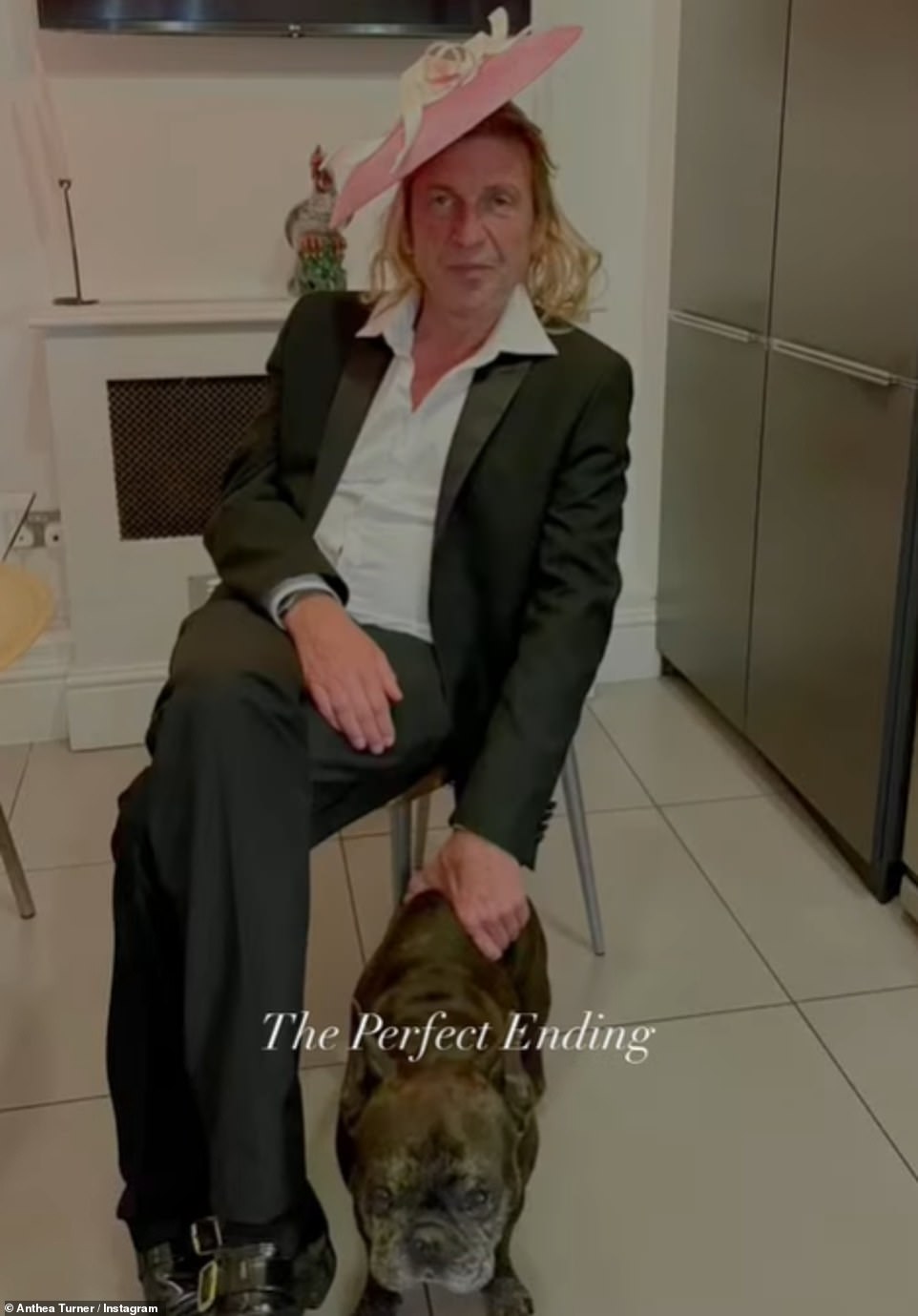 All good things must come to an end: Anthea shared a playful snap of her fiancé wearing her hat and their dog Soho as the night came to a close