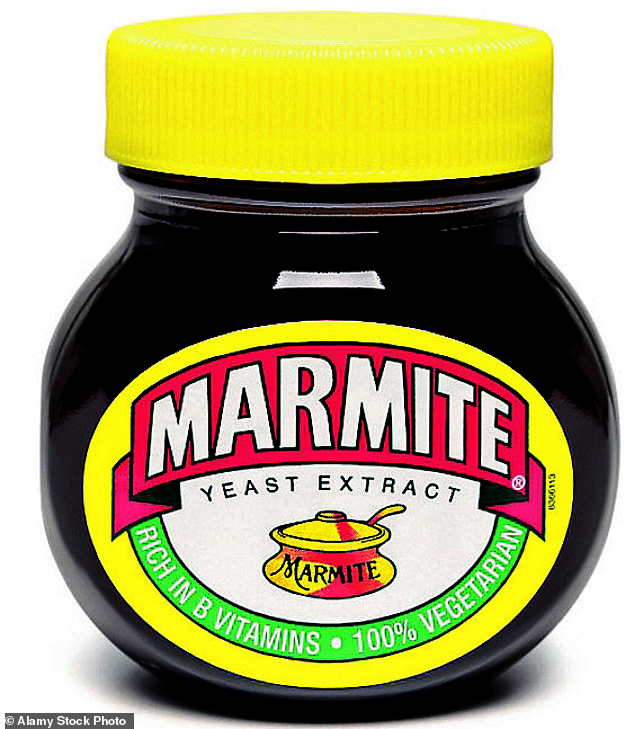 If you want to ward off the blues, coating your toast with Marmite may help.

Vitamin B6 — abundant in the controversial spread — can reduce feelings of anxiety and depression, researchers say.

Tests suggested vitamin B6 can ward off bad thoughts by interfering with your brain chemistry.

Mental health benefits were, however, only achieved by consuming very high doses, similar to levels seen in supplements.

Reading University academics say, however, lower doses of B6 found in the ‘love it or hate it’ spread could also help reduce anxiety levels to a smaller extent.

The vitamin is also found in other foods, including tuna, chickpeas, leafy greens, oranges and bananas.

Eating Marmite could help reduce anxiety and depression levels because of its high levels of vitamin B6, a University of Reading study suggested today 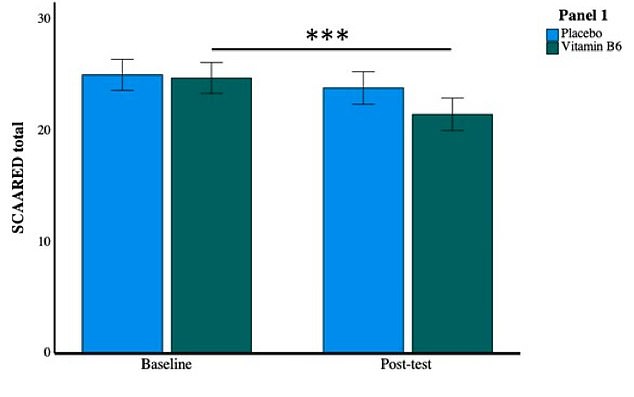 Graph shows: Anxiety levels dropped by 13 per cent in those taking B6 (dark blue) every day, compared to just 4.8 per cent in the placebo group (light blue)

Anxiety is a normal part of life that affects different people in different ways at different times.

Whereas stress can come and go, anxiety often persists and does not always have an obvious cause.

Along with depression, anxiety is among the most common mental-health condition in the UK, affecting 8.2million people in 2013 alone.

Around 40million adults suffer from the condition in the US every year.

Anxiety can make a person imagine things in their life are worse than they are or that they are going mad.

Although it evolved as part of the ‘fight or flight’ mechanism in our caveman days to avoid danger, anxiety can be inappropriately activated in everyday life when stress builds up.

It can have a clear cause, such as moving house or having surgery. However, sometimes little life events build up until a person is unable to cope, with anxiety then taking them by surprise.

Physical symptoms can include:

Some psychological symptoms are:

Activates like yoga, exercise, reading and socialising can help to manage anxiety.

While previous research has linked high levels of B vitamins to lower stress, this was the first study to narrow down exactly which type was to thank.

The study tested the effects of B6 and B12 supplements on 300-plus students, most of whom where battling anxiety or depression.

Some volunteers were given a daily 100mg B6 tablet — 70 times the recommended daily amount — to eat with their meals for a month.

A serving of marmite contains much smaller quantities, although its nutritional information does not specify exactly how much.

The spread, which is made from yeast extract, does also contain 8.9 micrograms of B12 — 76 per cent of the recommended daily intake — which was the other B vitamin tested.

Another group were given sugar pills, according to the study published in Human Psychopharmacology Clinical and Experimental.

Participants were given anxiety and depression questionnaires at the start and end of the 30-day period to see how their levels of both changed.

The surveys, which are commonly used in psychiatry, asked them about their symptoms, including nervousness, worrying about whether people like them and heart rate.

Results showed those on B6 had significantly lower rates than the placebo group.

Meanwhile, depression levels rose slightly in the placebo group, while falling in those taking B6 and remaining flat in those on B12.

Lead author Dr David Field said: ‘Many foods, including tuna, chickpeas and many fruits and vegetables, contain vitamin B6.

‘However, the high doses used in this trial suggest supplements would be necessary to have a positive effect on mood.’

The effect of B6 on depression was quite small compared to normal medication, Dr Field said.

He said: ‘However, nutrition-based interventions produce far fewer unpleasant side effects than drugs, and so in the future people might prefer them as an intervention.

‘One potential option would be to combine B6 supplements with talking therapies, such as cognitive behavioural therapy, to boost their effect.’

Vitamin B6 increases the body’s production of gamma-aminobutyric acid (GABA), which stops the brain from overworking.

The chemical produces a calming effect within the brain by blunting nerve signals.

Tests measuring participants’ vision — which is also affected by GABA — suggested those on B6 supplements had significantly increased levels of the chemical.

Dr Field said: ‘The functioning of the brain relies on a delicate balance between the excitatory neurons that carry information around and inhibitory ones, which prevent runaway activity.

‘Recent theories have connected mood disorders and some other neuropsychiatric conditions with a disturbance of this balance, often in the direction of raised levels of brain activity.

‘Vitamin B6 helps the body produce a specific chemical messenger that inhibits impulses in the brain, and our study links this calming effect with reduced anxiety among the participants.’

Around 8million adults in Britain are thought to suffer from anxiety, while 40million in the US have the condition.

It can cause to debilitating panic attacks, affecting people’s ability to work and socialise, as well as digestive problems and trouble sleeping.

Patients are normally given cognitive behavioural therapy (CBT), where psychiatrists talk through their issues and help them change the way they think.

Virgin Holidays launches sale with £100 off all hols in September – including New York, Orlando & the Caribbean

Wolfenstein games in order: By release date and timeline

What is clomiphene? The infertility drug that put Connor Benn’s fight with…