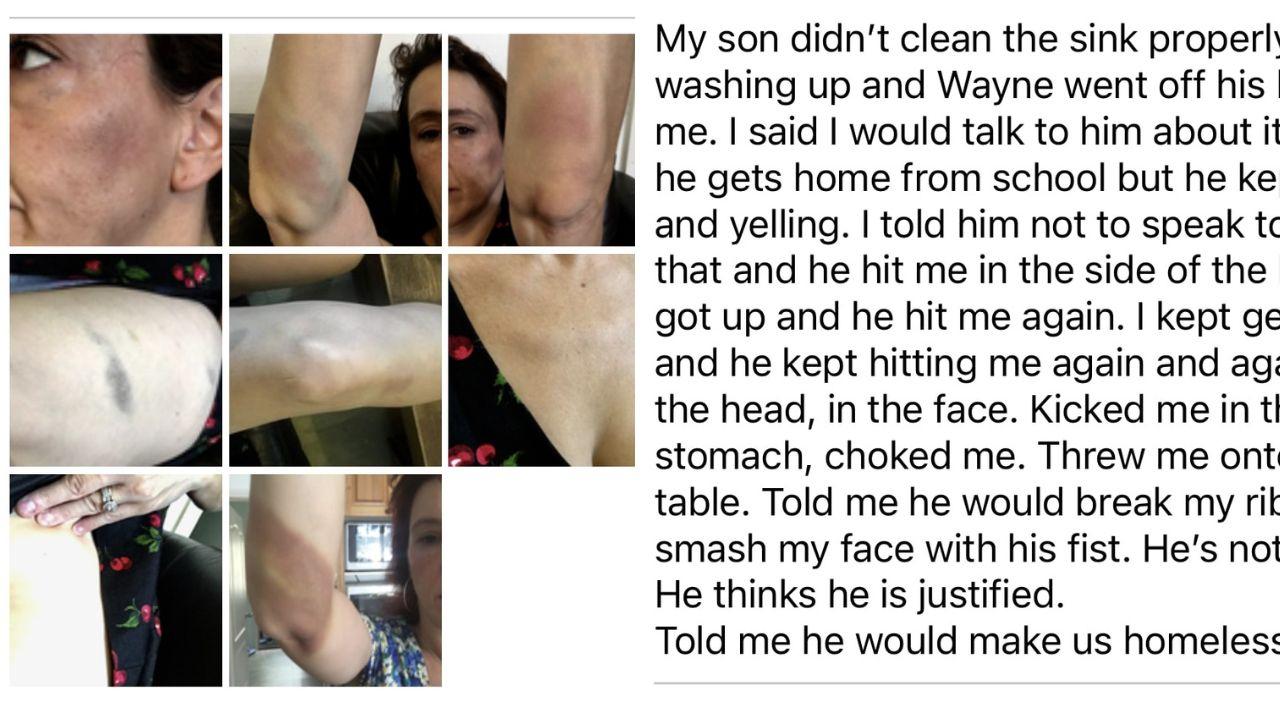 Julie Bayliss, 45, fell for Wayne Haddow, 60, when she was at a vulnerable point in her life.

Julie and Wayne had been friends for 15 years and had supported each other through a lot.

When Julie’s 10-year-old son Benjamin died in 2009 and her marriage broke down, Wayne was again a rock for the family.

“He was charming, romantic, would listen endlessly, He asked a lot of questions. It was all about me and the kids in the beginning, never about him,” Julie told news.com.au’s podcast I Swear I Never.

“He built my confidence, he seemed perfect, but, of course, what I’ve since learnt is that they get to know you and build that perfect personality to draw you in.”

Julie knew that he had a chequered past, including being a former member of a prominent outlaw bikie gang, but the man she knew was gentle and calm, so she didn’t feel like she had cause for concern.

By 2016 the pair were officially a couple and a few months into the relationship Wayne began to have seizures, Julie would learn that he had a condition called arteriovenous malformation, which is an abnormal tangle of blood vessels which disrupts blood flow and oxygen circulation. Wayne hadn’t been taking his medication, causing seizures and a brain injury.

Wayne’s doctors told Julie the brain injury was not in a location that could cause behavioural changes, but she wasn’t convinced.

Soon, Wayne’s behaviour became more erratic, he became verbally abusive and controlling, to the point that he was telling Julie when she was allowed to go to the toilet, what she should wear and how much weight she needed to lose or gain. Quickly, that abuse became physical as well.

Julie recalls an early assault when he became frustrated with her driving.

“And he just lost it,” she said. “Went off his brain telling me to get out of the car.”

“I was used to the yelling by this point, so that really wasn’t much, we went up to the house and as I was trying to open the door, he kicked my legs out from under me in the street and then opened the door.

“I had long hair then, and he grabbed me by the hair, and threw me across the room into a table. And I was in absolute shock. Just did not expect that from him at all.”

Around the same time, an acquaintance of Julie’s sent her a link to an app called Arc, it’s a discrete app that can remain hidden on your phone and be used to document abuse with dates, time, descriptions and photos.

Julie’s friend wasn’t targeting her with the message, she sent it out to her entire female friend list just so that all the women in her life were aware of it. It was a gesture that would be incredibly fortuitous to Julie.

She began to document the abuse in secret, at first, she wasn’t doing it to gain a conviction.

“I wanted some record of it in case something really bad happened and he accidentally killed me,” she said. “ I didn’t want my family not knowing what happened. So I started recording it in there, not thinking that I was ever going to need it.”

The Arc app was created by the Domestic Violence Resource Centre Victoria, now known as Safe And equal.

Louise Simms, executive director, policy, communications and engagement at Safe and Equal says Arc came about after much research and consultation with those that had experienced abuse.

“What we learned was that many victim survivors wanted a tool to collate information about their experiences, as a ‘sense check’ or confirmation of what had happened to them, particularly in cases where an abusive person was gaslighting them.

“Arc is more than an evidence collection tool. For some victim survivors it may represent an online diary or reflection tool or help them identify patterns of behaviour.

“It may also help victim survivors explain their situation to a friend or family member, or provide key information to police, in court, or with legal, family violence and community service practitioners, and reduce the number of times they have to repeat that story.”

But as the abuse increased Julie knew she had to leave Wayne and protect herself and her children. Plus, the excuse of the brain injury was wearing thin.

“What did it for me was the last doctor,” Julie said. “We’d been at the hospital. And when I went to go back in to see him after work, the doctor said, ‘Oh, can you come in and see me before you go in’. And I said, ‘Yeah.’ And I thought they were gonna tell me he was degenerating, he was going to die, and he said to me, ‘this is not the brain injury’.”

Julie attempted to argue with the doctor until he made a point she couldn’t ignore.

Julie went to the police for help as she wasn’t sure how to get Wayne to leave without putting herself in danger. He had threatened multiple times to burn down her house.

When she told the police about the abuse, she was able to hand them a phone filled with time-stamped and photographic evidence as well as detailed descriptions of the acts thanks to the app as well as extensive medical records.

Wayne was arrested and given 19 charges, four charges of common assault, five charges of assault, occasioning, bodily harm, five charges of stalk/intimidate intend fear and physical harm, four charges of choking without consent, and one charge for possession of drugs after they were found during the police search of the home. All but one of the domestic violence charges came from Julie’s app evidence and one of them came by Wayne’s own admission. He told police that he’d shoved her into the wall.

Wayne pleaded guilty in court and he was sentenced to four years in prison with a non-parole period of two years and four months, he has since appealed that sentence and that hearing will happen in January.

For Julie, and many other victims like her, the pain doesn’t end at sentencing.

“Every time I walk out my front door, and I look at all the security details, the fence and everything else. I’m reminded that we live in a prison. And for all that time he was bailed, even though he pleaded guilty. He was bail for all that time. We lived in prison and he didn’t. And you know, two and a half years from now. We’ll still live in a prison and he won’t anymore.”

Julie’s son has started a GoFundMe to help the family move to a safer location.

At The Movies: Steven Spielberg’s boyhood memoir a bittersweet tale

At The Movies: Steven Spielberg’s boyhood memoir a…

Sidharth Malhotra keeps it simple with his gold wedding…