Are Republicans Finally Starting to Turn on Liar-Elect George Santos? 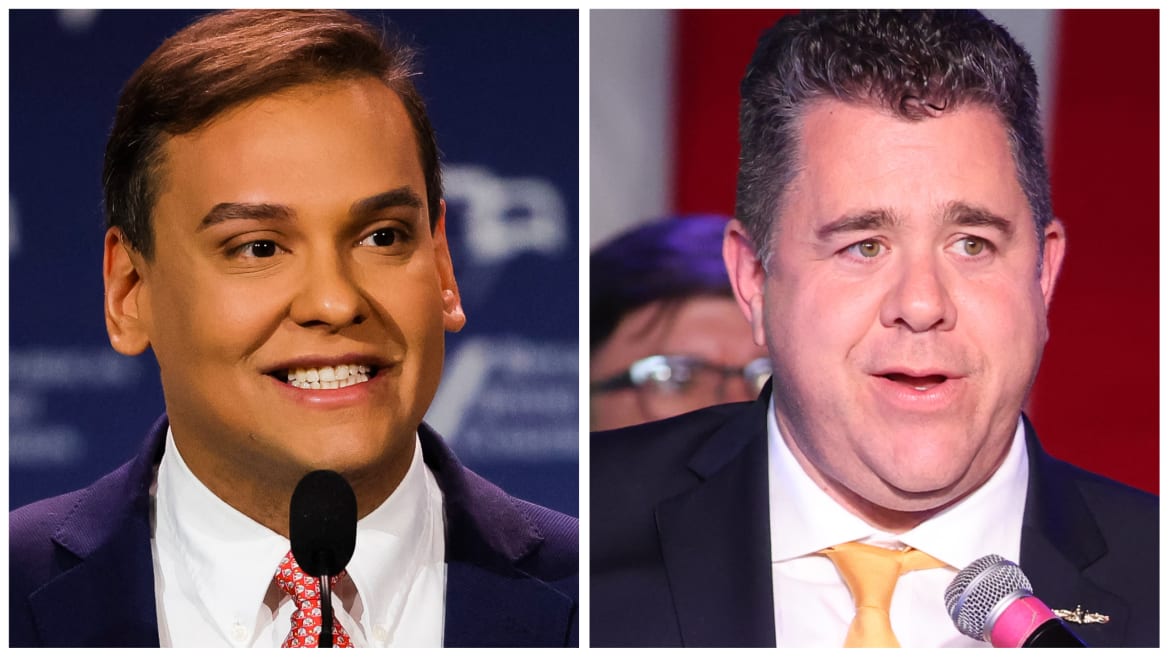 Despite brutal reports from The New York Times, The Daily Beast, and other publications showing that Santos fabricated large parts of his resume and even his very identity, it seemed virtually inevitable he would take a seat in Congress next month.

That may still be the case. But on Tuesday, Nick LaLota—a fellow Republican who just won a congressional seat on Long Island to the east of the New York district Santos won—called for a probe of his would-be colleague.

“I have heard from countless Long Islanders how deeply troubled they are by the headlines surrounding George Santos,” LaLota said in a statement. The Republican went on to call for “a full investigation by the House ethics committee and, if necessary, law enforcement” of Santos.

If the walls are closing in on Santos—or at least beginning to—his mind-boggling attempt at issuing a mea culpa this week may be part of the reason why.

In local interviews with New York media outlets, Santos essentially admitted that his biography was a sham. Still, he tried—painfully—to cling to some element of dignity, claiming that telling voters he worked at Citigroup, for instance, when he never did so was not a lie but just a poor choice of words. (He also admitted that he did not attend the college he said he graduated from, and did not own 13 rental properties—or in fact any—as he had claimed.)

Santos’ lies go well beyond his professional life. As The Daily Beast reported, he claimed to be openly gay for a decade, but in fact failed to disclose a previous marriage to a woman that ended shortly before he launched his political campaigns. And the Forward reported that his claims to having ancestors who escaped the Holocaust appeared to be a total fabrication.

Even his comical explanation that he only ever described himself as “Jew-ish” was quickly debunked by the Forward, which unearthed campaign materials Santos sent community leaders in which he called himself a “proud American Jew.”

“I expected more than just a blanket apology. The damage that his lies have caused to many people, especially those who have been impacted by the Holocaust, are profound,” Joseph Cairo Jr., the chair of a county Republican Party in Santos’ district, told The New York Times. Likewise, the Republican Jewish Coalition said Santos had “deceived” them and would no longer be welcome at their events.

If a fellow Republican who just won a seat turning on him is bad sign, the raw political math—and laws that make it difficult not to seat people who win elections—are on Santos’ side.

Kevin McCarthy is in the fight of his life to cobble together the votes he needs to become Speaker. And as the Times reported, at least before he apparently deleted a tweet about McCarthy, Santos appeared to be a vote the wannabe speaker could count on. GOP members have little incentive, regardless of where they come down on who should be their leader, to reduce their narrow majority by purging a liar from their ranks. It’s also exceptionally rare for lawmakers to refuse to seat someone who won an election.

In other words, it will likely take a groundswell of Republicans—rather than one or two dissenters—calling for Santos to face real consequences if his ascent to federal office is going to falter.