Are there really neo-Nazis fighting for Ukraine? Well, yes — but it’s a long story 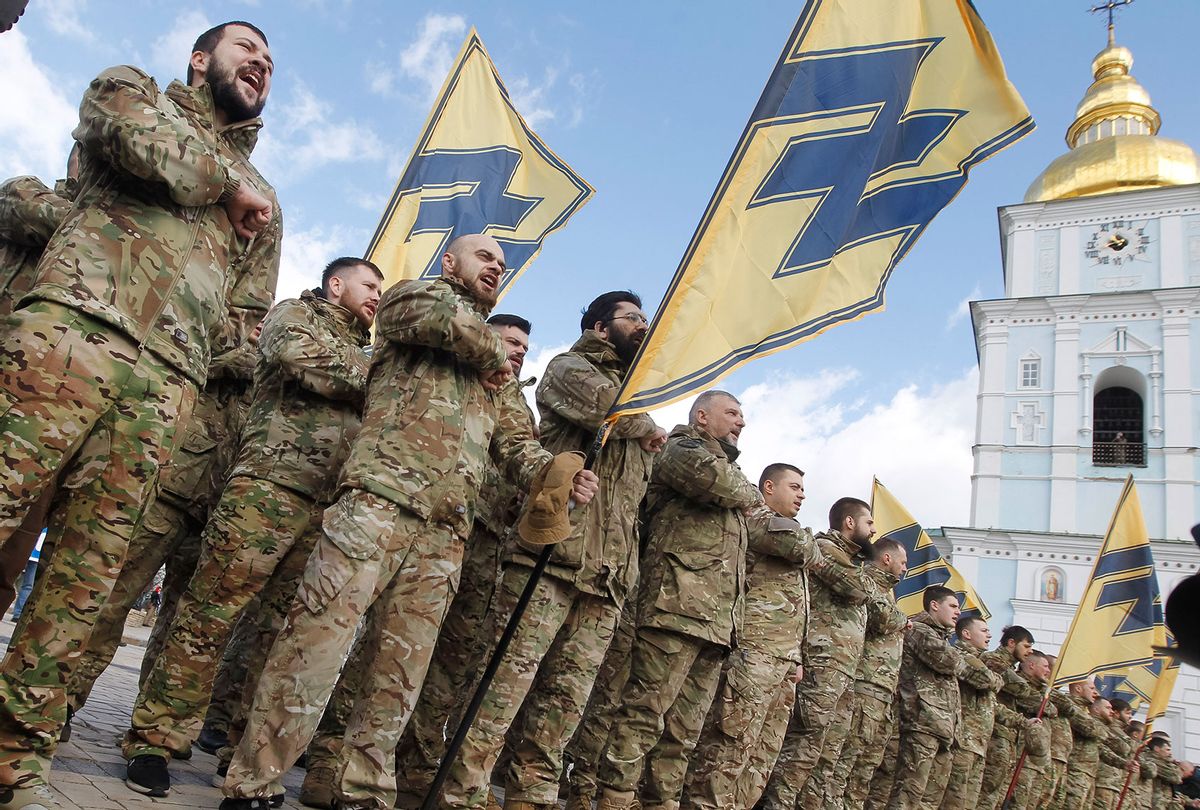 Russian President Vladimir Putin has claimed that he ordered the invasion of Ukraine to “denazify” its government, while Western officials, such as former U.S. ambassador to Moscow Michael McFaul, have called this pure propaganda, insisting, “There are no Nazis in Ukraine.”

In the context of the Russian invasion, the post-2014 Ukrainian government’s problematic relations with extreme right-wing groups and neo-Nazi parties has become an incendiary element on both sides of the propaganda war, with Russia exaggerating it as a pretext for war and the West trying to sweep it under the carpet.

The reality behind the propaganda is that the West and its Ukrainian allies have opportunistically exploited and empowered the extreme right in Ukraine, first to pull off the 2014 coup and then by redirecting it to fight separatists in eastern Ukraine. And far from “denazifying” Ukraine, the Russian invasion is likely to further empower Ukrainian and international neo-Nazis, as it attracts fighters from around the world and provides them with weapons, military training and the combat experience that many of them are hungry for.

RELATED: The Ukraine catastrophe and how we got here: Chronicle of a war foretold

Ukraine’s neo-Nazi Svoboda Party and its founders, Oleh Tyahnybok and Andriy Parubiy, played leading roles in the U.S-backed coup in February 2014. Assistant Secretary of State Victoria Nuland and U.S. ambassador Geoffrey Pyatt mentioned Tyahnybok as one of the leaders they were working with in their infamous leaked phone call before the coup, even as they tried to exclude him from an official position in the post-coup government.

As formerly peaceful protests in Kyiv gave way to pitched battles with police and violent, armed marches to try to break through police barricades and reach the Parliament building, Svoboda members and the newly-formed Right Sector militia, led by Dmytro Yarosh, battled police, spearheaded marches and raided a police armory for weapons. By mid-February 2014, these men with guns were the de facto leaders of the Maidan movement.

We will never know what kind of political transition peaceful protests alone might have produced in Ukraine, or how different the new government would have been if a peaceful political process had been allowed to take its course without interference by the U.S. or violent right-wing extremists.

But it was Yarosh who took to the stage in the Maidan and rejected the Feb. 21, 2014 agreement negotiated by the French, German and Polish foreign ministers, under which President Viktor Yanukovych and opposition political leaders agreed to hold new elections later that year. Instead, Yarosh and Right Sector refused to disarm and led the climactic march on Parliament that overthrew the government.

Since 1991, Ukrainian elections had swung back and forth between leaders like Yanukovych, who was from Donetsk and had close ties with Russia, and Western-backed leaders like President Viktor Yushchenko, who was elected in 2005 after the “Orange Revolution” that followed a disputed election. Ukraine’s endemic corruption tainted every government, and rapid public disillusionment with whichever leader and party won power led to a seesaw between Western- and Russian-aligned factions.

In 2014, Nuland and the State Department got their favorite, Arseniy Yatsenyuk, installed as prime minister of the post-coup government. He lasted two years until he, too, lost his job due to endless corruption scandals. Petro Poroshenko, the post-coup president, lasted a bit longer, until 2019, even after his personal tax evasion schemes were exposed in the 2016 Panama Papers and 2017 Paradise Papers.

When Yatsenyuk became prime minister, he rewarded Svoboda’s role in the coup with three cabinet positions, including Oleksander Sych as deputy prime minister, and governorships of three of Ukraine’s 25 provinces. Svoboda’s Andriy Parubiy was appointed chairman (or speaker) of Parliament, a post he held for the next five years. Tyahnybok ran for president in 2014, but only got 1.2% of the votes, and was not re-elected to Parliament.

Ukrainian voters turned their backs on the extreme right in the 2014 post-coup elections, reducing Svoboda’s 10.4% share of the national vote in 2012 to 4.7%. Svoboda lost support in areas where it held control of local governments but had failed to live up to its promises, and its support was split now that it was no longer the only party running on explicitly anti-Russian slogans and rhetoric.

After the coup, Right Sector helped to consolidate the new order by attacking and breaking up anti-coup protests, in what their leader Yarosh described to Newsweek as a “war” to “cleanse the country” of pro-Russian protesters. This campaign climaxed on May 2 with the massacre of 42 anti-coup protesters in a fiery inferno, after they took shelter from Right Sector attackers in the Trades Unions House in Odessa.

After anti-coup protests evolved into declarations of independence in Donetsk and Luhansk, the extreme right in Ukraine shifted gear to full-scale armed combat. The Ukrainian military had little enthusiasm for fighting its own people, so the government formed new National Guard units to do so.

Right Sector formed a battalion, and neo-Nazis also dominated the Azov Battalion, which was founded by Andriy Biletsky, an avowed white supremacist who claimed that Ukraine’s national purpose was to rid the country of Jews and other inferior races. It was the Azov battalion that led the post-coup government’s assault on the self-declared republics and retook the city of Mariupol from separatist forces.

The Minsk II agreement in 2015 ended the worst fighting and set up a buffer zone around the breakaway republics, but a low-intensity civil war continued. An estimated 14,000 people have been killed since 2014. Rep. Ro Khanna, D-Calif., and other progressive members of Congress tried for several years to end U.S. military aid to the Azov Battalion. They finally did so in the fiscal 2018 Defense Appropriation Bill, but Azov reportedly continued to receive U.S. arms and training despite the ban.

In 2019, the Soufan Center, which tracks terrorist and extremist groups around the world, warned: “The Azov Battalion is emerging as a critical node in the transnational right-wing violent extremist network. … [Its] aggressive approach to networking serves one of the Azov Battalion’s overarching objectives, to transform areas under its control in Ukraine into the primary hub for transnational white supremacy.”

The Soufan Center described how the Azov Battalion’s “aggressive networking” reaches around the world to recruit fighters and spread its white supremacist ideology. Foreign fighters who train and fight with the Azov Battalion then return to their own countries to apply what they have learned and recruit others.

Violent foreign extremists with links to Azov have included Brenton Tarrant, who massacred 51 worshippers at two mosques in Christchurch, New Zealand, in 2019, and several members of the U.S. Rise Above Movement who were prosecuted for attacking counter-protesters at the “Unite the Right” rally in Charlottesville in August 2017. Other Azov veterans have returned to Australia, Brazil, Germany, Italy, Norway, Sweden, the U.K. and other countries.

Despite Svoboda’s declining success in national elections, neo-Nazi and extreme nationalist groups, increasingly linked to the Azov Battalion, have maintained power on the street in Ukraine, and in local politics in the Ukrainian nationalist heartland around Lviv in western Ukraine.

After President Volodymyr Zelenskyy’s election in 2019, the extreme right threatened him with removal from office, or even death, if he negotiated with separatist leaders from Donbas and followed through on the Minsk Protocol. Zelenskyy had run for election as a “peace candidate,” but under threat from the right, he refused to even talk to Donbas leaders, whom he dismissed as terrorists.

During Trump’s presidency, the U.S. reversed Obama’s ban on weapons sales to Ukraine, and Zelenskyy’s aggressive rhetoric raised new fears in Donbas and Russia that he was building up Ukraine’s forces for a new offensive to retake Donetsk and Luhansk by force.

The civil war has combined with the government’s neoliberal economic policies to create fertile ground for the extreme right. The post-coup government imposed more of the same “shock therapy” that was imposed throughout Eastern Europe in the 1990s. Ukraine received a $40 billion International Monetary Fund bailout and, as part of the deal, privatized 342 state-owned enterprises; reduced public sector employment by 20%, along with salary and pension cuts; privatized health care and disinvested in public education, closing 60% of its universities.

Coupled with Ukraine’s endemic corruption, these policies led to the looting of state assets by the corrupt ruling class, and to falling living standards and austerity measures for everybody else. The post-coup government upheld Poland as its model, but the reality was closer to Boris Yeltsin’s Russia of the 1990s. After a nearly 25% fall in GDP between 2012 and 2016, Ukraine is still the poorest country in Europe.

As elsewhere, the failures of neoliberalism have fueled the rise of right-wing extremism and racism, and now the war with Russia promises to provide thousands of alienated young men from around the world with military training and combat experience, which they can then take home to terrorize their own countries.

The Soufan Center has compared the Azov Battalion’s international networking strategy to that of al-Qaida and ISIS. U.S. and NATO support for the Azov Battalion poses similar risks as their support for al-Qaida-linked groups in Syria 10 years ago. Those chickens quickly came home to roost when they spawned ISIS and turned decisively against their Western backers.

Right now, Ukrainians are united in their resistance to Russia’s invasion, but we should not be surprised when the U.S. alliance with neo-Nazi proxy forces in Ukraine, including the infusion of billions of dollars in sophisticated weapons, results in similarly violent and destructive blowback.

Read more on the Ukraine conflict and how we got here:

Denial of responsibility! Planetconcerns is an automatic aggregator around the global media. All the content are available free on Internet. We have just arranged it in one platform for educational purpose only. In each content, the hyperlink to the primary source is specified. All trademarks belong to their rightful owners, all materials to their authors. If you are the owner of the content and do not want us to publish your materials on our website, please contact us by email – [email protected]. The content will be deleted within 24 hours.

Why captions are suddenly everywhere and how they got there

Scientists find a way to grow plants in complete darkness

Zelensky expected to ask for more support in address to G7…

Russia on the brink of historic debt default as payment…