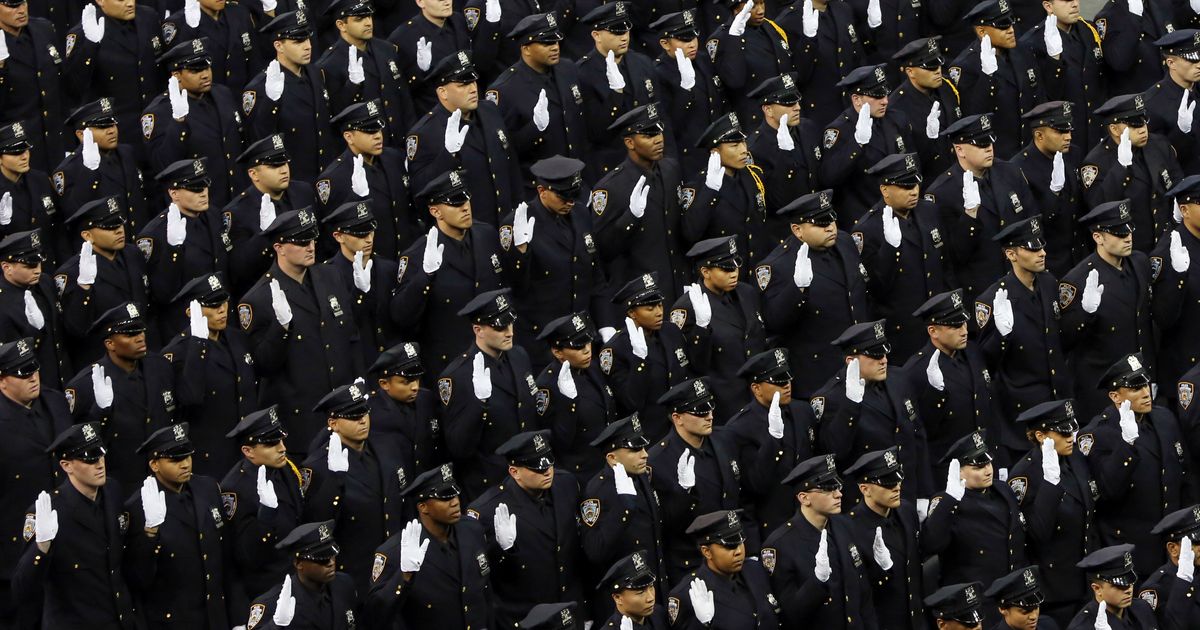 WASHINGTON — As U.S. police departments seek to overcome an exodus of disgruntled officers and a sudden decline in applications, they are wooing recruits with some of the tactics a football coach might use to land a prized quarterback.

In Fairfax County, Virginia, in the suburbs of Washington, future officers are being treated to a “signing day” ceremony during which they formally accept their job offers.

Out-of-state residents who want to join the police force in Louisville, Kentucky, are being flown in to take entrance tests, put up in a hotel and paired with an officer for a ride-along.

On the West Coast, some agencies are offering bonuses worth tens of thousands of dollars to lure officers from other departments to transfer.

The economics of law enforcement were long tilted in favor of police departments, which often had far more qualified applicants than they did job openings. No longer. A steep drop in the number of people wanting to become police officers since the start of the pandemic and the unrest of 2020 have given extraordinary leverage to job seekers, forcing departments to market themselves in new ways.

“The game has clearly changed,” said Marcus Jones, police chief in Montgomery County, Maryland, who said he discovered that another department was using location-based digital advertising to target the area around his police stations with job postings.

Calls to radically revamp policing and divert resources to other agencies, heard in protests nationwide after the murder of George Floyd in 2020, have since cooled. But police chiefs say they are still contending with the fallout from those months.

At a recent conference in Washington held by the Police Executive Research Forum, a law enforcement policy organization, officials from departments nationwide said they were struggling. They said they were not finding enough people willing and able to fight crime, staff unfilled shifts and build residents’ trust in police.

“I need an officer that’s literally going to be the community outreach officer, but also can respond to that active shooter,” said Chief Adrian Diaz of the Seattle police. His department lost hundreds of officers after the unrest of 2020, which in his city included a so-called autonomous zone and a police station that the department vacated for weeks.

Diaz said that many officers who left felt unappreciated by politicians and residents, especially at a time when “defund the police” became a staple of political discourse. Some departing officers accepted signing bonuses to join departments in the suburbs; others fled the profession entirely. Although Seattle now offers a $30,000 bonus of its own for officers serving elsewhere who transfer to the city, as well as a $7,500 signing bonus for new recruits, Diaz said recruiting is still proving difficult. New police officers in Seattle earn about $83,000 annually once they graduate from the academy, while experienced officers transferring earn more than $90,000 a year to start.

The officer shortages are happening during a larger reordering of the American economy. Low unemployment rates, ample job openings and a proliferation of remote work have emboldened people in many fields to seek better pay, new career paths or more time off to spend with family. And within policing, many departments were already facing a crush of officers nearing retirement age.

But there is broad agreement among police chiefs that the dwindling of the law enforcement talent pool is directly, although not exclusively, linked to the murder of Floyd by Minneapolis police and the widespread protests and unrest that followed.

“It wasn’t just what happened in Minneapolis — it was felt nationally in a way it never has been,” said Chuck Wexler, executive director of the Police Executive Research Forum. He added: “I think that’s taken its toll, either on prospective candidates or existing cops rethinking what it means to be a cop in America today.”

There is no comprehensive, real-time federal data on police employment. A survey of 184 police departments conducted this year by Wexler’s organization found that resignations were 43% higher in 2021 than in 2019, and that retirements were 24% higher. Hiring was down significantly in those departments over the same two-year span, although there were more new recruits in 2021 than in 2020. Many of those trends have continued this year, chiefs said in interviews.

Brandon Buskey, director of the Criminal Law Reform Project at the American Civil Liberties Union, said cities searching for new officers should be considering using public safety programs that do not involve policing.

Buskey said he was disappointed with a “return to the status quo of relying on police” since the protests of 2020, as tough-on-crime rhetoric has drowned out some of protesters’ most sweeping calls to overhaul law enforcement, root out systemic racism and rethink spending on public safety.

“That’s exactly the conversation that we need to be having: Whether the difficulties in retention and recruitment mean that we should take a look at how we actually provide safety and what are the best use of public dollars,” Buskey said. “Is it rehiring those officers, or is it in thinking through a coherent housing program or thinking through an alternative mental health crisis response?”

Since the unrest, many cities have ramped up efforts to send social workers instead of armed officers to some mental health emergencies, or have introduced new community policing programs. But even in the places that saw some of the largest protests in 2020, and that considered the most ambitious plans to divert spending from or even disband police departments, agencies are now scrambling to recruit and retain officers.

In Minneapolis, where residents rejected a proposal last year to replace their police department, and where police staffing levels have plummeted, the City Council recently approved $7,000 retention payments for officers to stay on the force. In San Francisco, where job openings abound, police recruiters are finding more success with middle-aged applicants looking for a career change. And in Baltimore, Commissioner Michael Harrison said a flight of officers to suburban departments had created a vicious cycle, with fewer city officers asked to do more work under difficult conditions.

“We have to make up the difference of officers who are not there: We want response times to be good; we want to be able to patrol and be visible to deter as much crime as we can,” Harrison said. He added: “We have to sometimes make them do it, sometimes cancel their off days to make them do it. And that’s a morale buster.”

The widespread job openings and the intense competition for recruits have forced some hard conversations about how officers are hired and what requirements they must meet. Some departments have sought to streamline lengthy and opaque application processes that once dragged on for months. Others have revisited long-standing hiring policies that disqualified people for past marijuana use or low credit scores — policies that they said could disproportionately hurt nonwhite applicants. Some departments have revamped fitness requirements that weeded out otherwise-qualified women. In Akron, Ohio, dozens of officer jobs remain open as the city copes with fallout from the fatal shooting of Jayland Walker, a 25-year-old Black man who was shot dozens of times by officers this year. Protesters filled the streets of Akron for days over the summer, calling for changes to the department and criminal charges for the officers who fired the shots. The investigation is still open.

“It keeps the organization off balance,” Chief Stephen Mylett said of the long wait to learn whether those officers would be prosecuted. “And it’s something that we have to work through together. It’s just a difficult time period right now in Akron.”

Mylett said staffing in his city had already reached crisis levels. He said that the department was having success diversifying its candidate pool, with a higher proportion of nonwhite and female applicants seeking police jobs, but that the overall number of recruits remained too low. To help, he scrapped a long-standing ban on officers wearing beards, despite some personal reservations.

“I came in a generation of police officer where you just didn’t have a beard,” Mylett said. He added: “The officers wanted it, and we were losing qualified applicants because we didn’t allow beards.”

Not every department is facing recruiting problems. John Clair, police chief in Marion, Virginia, in the state’s rural southwest, said his agency had been successful recruiting officers in part because of strong support from residents and a focus on quality of life. In Clearwater, Florida, Chief Daniel Slaughter said an increase in resignations had been largely offset by an influx of officers from other states, many of whom were looking for a more pro-police political climate. Gov. Ron DeSantis of Florida, a Republican, has showered praise on law enforcement and signed a law offering $5,000 bonuses for police recruits. But elsewhere in the country, departments have continued to struggle. In New York City, resignations are as high as they have been in at least 20 years, with many officers leaving for better-paying patrol jobs in smaller cities. Kevin Davis, chief in Fairfax County, Virginia, said the current job market has made departments think differently about how they recruit, unlike past eras when “there was a line out the door and around the corner” of applicants.

Fairfax County has eased rules on hairstyles and tattoos and pays bonuses to new officers.

But more than anything, Davis said, recruiters are trying to develop personal connections with prospective applicants in the hope that they will choose to become officers, and will pick their department over other agencies that are also dangling signing bonuses and perks.

“Big picture, we have to find a way as a profession to inspire young people to put their hand in the air and want to do this tough, tough work,” he said. “It’s still the greatest job in the world.”

Leopardstown racing preview: ‘Gala’ can put on debut show while Fil Dor is primed for Grade One glory