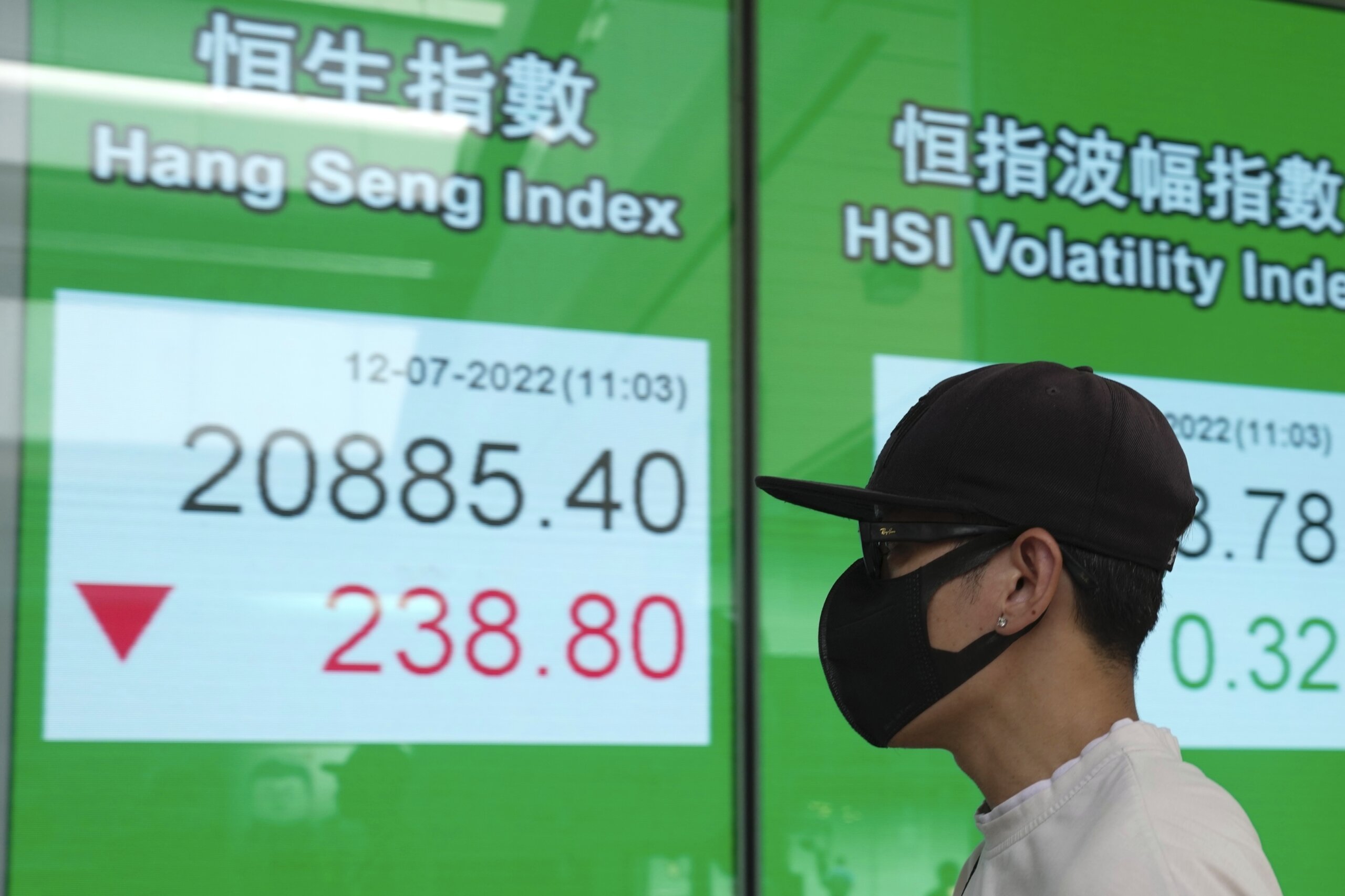 Investors are on the lookout this week for updates on inflation and corporate profits, while renewed coronavirus outbreaks are adding to jitters. Shares fell in Tokyo, Seoul, Hong Kong and Shanghai but rose in Sydney.

Both currencies have been trading at 20-year lows as the dollar has surged along with U.S. interest rates, which promise higher returns for investors.

The European common currency is close to dropping below parity, or one-to-one with the dollar. The last time the euro was below $1 was on July 15, 2002.

Adding to the pessimism, Hong Kong authorities announced they are considering implementing an electronic health code system to restrict movements of people infected with COVID-19, as well as overseas arrivals, a system similar to what’s already in place in mainland China.

The highest inflation in four decades is pushing the Federal Reserve and other central banks to hike interest rates, which puts the clamps on the economy and hurts various types of investments.

Stocks of smaller companies were some of the biggest losers, with the Russell 2000 index down 2.1%, as worries about a possible recession continued to dog markets.

Companies this week are set to begin reporting how their profits fared during the spring. Big banks and other financial companies dominate the early part of the schedule, with JPMorgan Chase and Morgan Stanley set for Thursday. BlackRock, Citigroup and Wells Fargo are among those reporting on Friday.

Expectations for second-quarter results seem to be low. Analysts are forecasting 4.3% growth for companies across the S&P 500, which would be the weakest since the end of 2020, according to FactSet.

Even if companies end up reporting better results than expected, which is usually the case, analysts say the heavier focus will be on what CEOs say about their profit trends for later in the year.

The roughly 19% drop for the S&P 500 this year has been due entirely to rising interest rates and changes in how much investors are willing to pay for each $1 of a company’s profit. So far, expectations for corporate profits have not come down much. If they do, that pull stocks still lower.

The recent rise of the U.S. dollar against other currencies has added another challenge to companies already contending with high inflation and potentially weakening demand, according to Michael Wilson, equity strategist at Morgan Stanley.

One euro is worth close to $1 now, down 15% from a year earlier, for example. The Japanese yen is also at a 20-year low. That means sales made in euros or yen are worth fewer dollars than before.

Beyond earnings updates, reports this week on inflation will likely dominate trading. On Wednesday, economists expect a report to show that inflation at the consumer level accelerated again last month, up to 8.8% from 8.6% in May.

Christmas Day lunch in Perth: Restaurants booked out for…

Queen’s desperate bid to broker peace between Charles and…