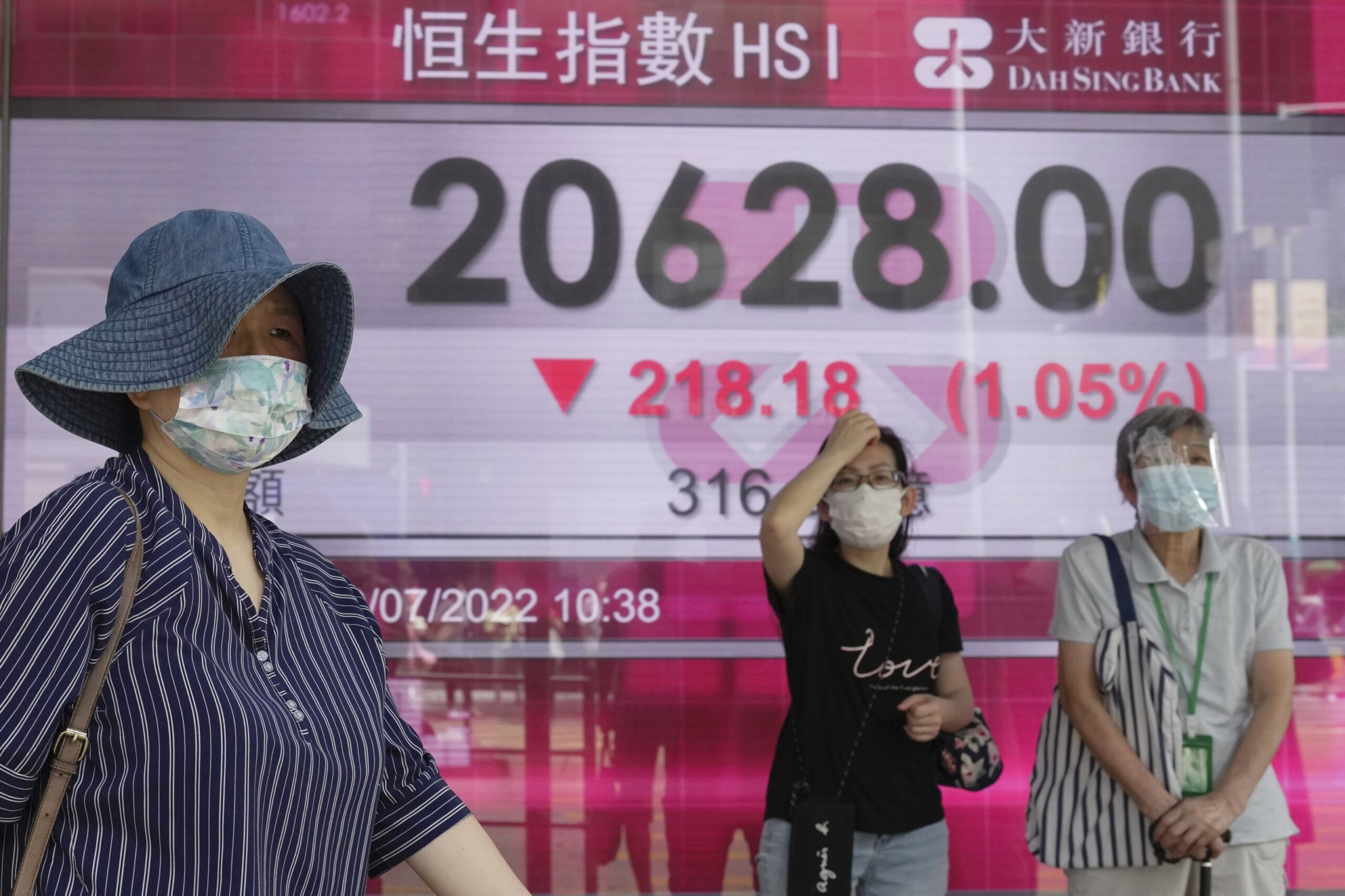 Tokyo’s benchmark was higher but other major indexes declined in morning trading after an early rally evaporated on Wall Street.

“The news paints a deteriorating picture for the outlook of major companies amid global growth fears. Traders will be paying close attention to the ongoing earnings season for further signs of how companies are faring in a weakening economy,” Anderson Alves, a trader at ActivTrades, said in a commentary.

Analysts said the Tokyo market is seeing some buying after a three-day weekend. Monday was a national holiday in Japan. Investors are playing catchup and so the rally may be short-lived. Among the issues picking up so far are Fast Retailing, the group company for the Uniqlo clothing retail chain, and Sony Corp.

The S&P 500 fell 0.8% to 3,830.85. Gains in energy producers, big retailers and other companies that rely on consumer spending were outweighed by a pullback in health care and technology stocks.

Markets are likely to remain volatile through the upcoming earnings season. Johnson & Johnson, American Airlines and Tesla are among the dozens of S&P 500 companies scheduled to issue quarterly snapshots this week.

The U.S. market has been lurching mostly lower for weeks on worries that the Federal Reserve and other central banks will slam the brake too hard on the economy in hopes of bringing down high inflation. If they’re too aggressive with their interest-rate hikes, they could cause a recession.

A key report released last week indicated expectations are easing for inflation among households. That could prevent a more vicious cycle from taking root and ease the pressure on the Federal Reserve.

Expectations have fallen for how aggressively the Federal Reserve will raise interest rates at its meeting next week. Traders are now betting on a roughly one-in-three chance for a monster hike of a full percentage point, with the majority favoring a 0.75 percentage point increase. As recently as Thursday, the heavy bet was on a hike of a full point.

Later this week, investors expect the European Central Bank on Thursday to raise interest rates for the first time in 11 years to combat inflation. Many investors expect an increase of 0.25 percentage points, “but more is not unthinkable,” economists wrote in a BofA Global Research report.

Corporate profits are under threat given high inflation and slowdowns in parts of the economy, though analysts are still forecasting continued growth.

Earnings season kicked off last week, and banks have dominated the early part of the schedule for reporting how much they earned from April through June.

Goldman Sachs was among the latest to report, and it rallied 2.5% after its profit and revenue were better than analysts expected.

In the bond market, the yield on the 10-year Treasury rose to 2.98% from 2.96% late Friday. The two-year yield, which rose to 3.17%, is still above the 10-year yield. Some investors see that as an ominous sign that could presage a recession in a year or two.

UK weather: Temperatures are set to hit 43C on the hottest day in UK history