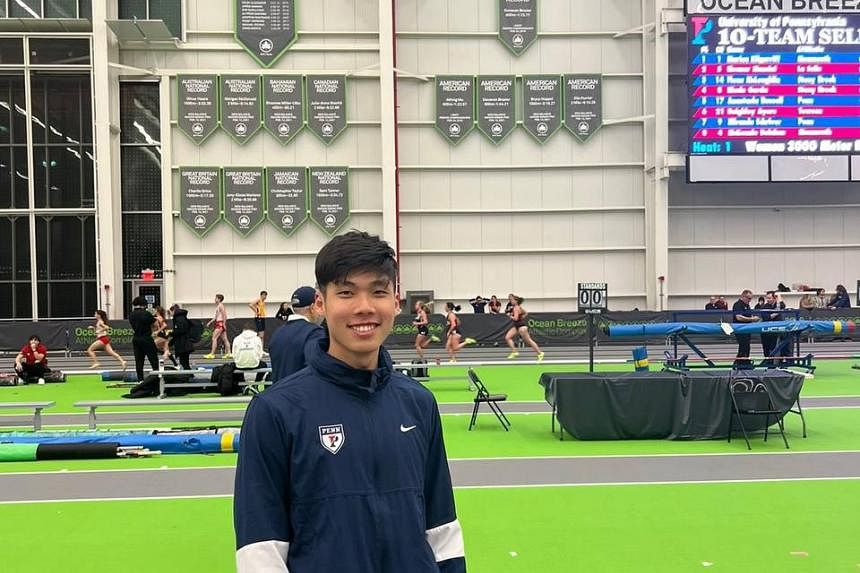 SINGAPORE — Singaporean high jumper Kampton Kam kicked off his collegiate athletics career with a bang last Saturday, as the 21-year-old leapt 2.06 metres at the Penn 10-Team Select to claim gold and better his national indoor record by one centimetre.

Competing for the University of Pennsylvania, freshman Kam and teammate Mark Anselmi both cleared 2.06m at the Ocean Breeze Athletic Complex in Staten Island, New York, but the Singaporean was awarded the win on countback. Pennsylvania’s Conrad Moore was third (2.01m).

“It felt kind of stress-free in a way because I knew I had jumped higher than 2.06m before,” said Kam in a phone interview from New York. “It was more like a relief that I managed to start off my college athletics with an indoor record.”

Kam, who is pursuing an economics degree in the university’s Wharton Business School, noted that it has been a “hard transition” moving from Singapore to the United States while “juggling academics, and Ivy League as well as a commitment of an almost full-time athlete”.

Training during the winter season was also “far from ideal” as he has had to practise on a track built around indoor tennis courts, a temporary setup as the school’s indoor track has not ben built.

After a positive start in 2023, Kam is raring to go after a difficult 2022 season that saw him withdrawing from May’s Hanoi SEA Games in May to undergo surgery for a collapsed lung.

After missing out on the SEA Games, he “even more motivated to get the medal for Singapore” at the 2023 edition in Cambodia. “It has been a dream since I was small,” he said.

His outdoor personal best of 2.20m will put him in good stead for a podium spot. At the last Games, Thailand’s Kobsit Sitthichai leapt 2.21m to claim the gold medal, with the the silver and bronze medallists all tied on 2.18m.

He will also compete at the Asian Games in Hangzhou, China, in September and is also hoping to qualify for the National Collegiate Athletic Association Outdoor Track and Field Championships this season.