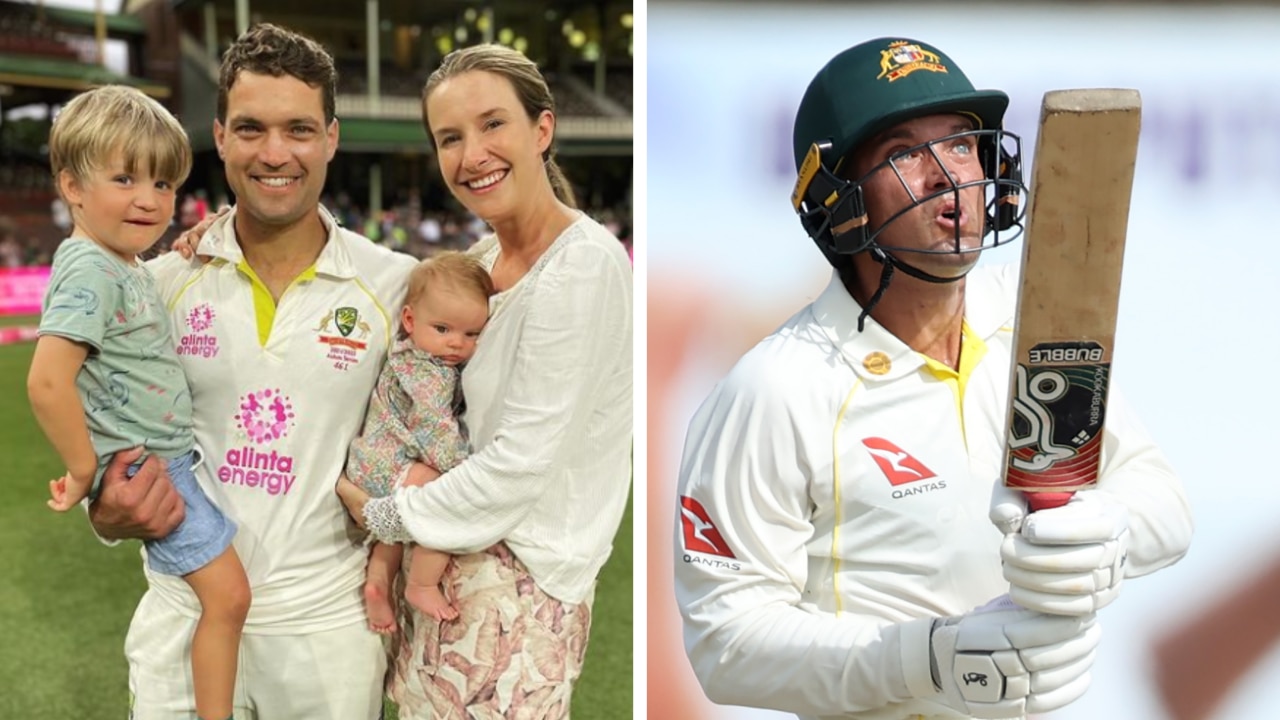 Alex Carey’s wife told the Aussie wicketkeeper to put away the reverse sweep, a bit of advice he probably shouldn’t have ignored.

Sri Lanka’s top-order has frustrated the Australian bowling attack on day two of the second Test in Galle, with only two wickets falling on Saturday afternoon.

After the visitors registered a first-innings total of 364, Sri Lanka knocked off half of the deficit in two-and-a-bit sessions with the loss of only two wickets.

Australia was in a commanding position at stumps on day one, but the Sri Lankans fought back in the morning session by claiming the final five wickets in quick succession.

Sri Lankan debutant Prabath Jayasuriya finished with figures of 6/118, becoming only the third Sri Lankan to take a six-wicket haul on Test debut.

But then Sri Lankan skipper Dimuth Karunaratne and No. 3 batter Kusal Mendis combined for a marathon 152-run stand to thwart the Aussies.

However, Karunaratne fell agonisingly short of a 15th Test century, with Queensland leg-spinner Mitchell Swepson trapping him on the front pad for 86.

Sri Lanka was 2/184 at stumps on day two, still trailing Australia by 180 runs. Mendis remains unbeaten on 84 with veteran Angelo Mathews at the other end on 6.

Locals were barred from watching the Test from the ramparts of Galle Fort, but that didn’t stop peaceful protesters gathering on the iconic landmark’s walls and outside the venue.

Sri Lanka’s economy has collapsed after years of macroeconomic mismanagement by the ruling Rajapaksa family, resulting in severe food, fuel and electricity shortages.

Australian captain Pat Cummins posted about the tragedy just hours before the start of play and shared a link to support Unicef’s humanitarian projects in Sri Lanka.

It was undeniably Sri Lanka’s day, with the hosts knocking off half of Australia’s first innings total with the loss of just two wickets.

Play will resume at 2.30pm AEST on Sunday, with Sri Lankan No. 3 Kusal Mendis unbeaten on 84.

Mitchell Swepson gets the breakthrough for Australia!

After Sri Lankan captain Dimuth Karunaratne and No. 3 Kusal Mendis combined for a marathon 152-run stand, the Queensland leg-spinner got a delivery to shoot through and trap Karunaratne on the pads.

It was absolutely plumb, and a desperate review couldn’t save the left-hander.

Angelo Mathews is the new batter in the middle.

Dimuth batted superbly but on this occasion Swepson got the better of him #SLvAUS pic.twitter.com/OpcbeVtc90

Sri Lankan captain Dimuth Karunaratne has brought up his fifty in Galle, reaching the minor milestone in 108 deliveries.

His partnership with Sri Lankan No. 3 Kusal Mendis is approaching triple figures.

Kusal Mendis and Dimuth Karunaratne have combined for a fifty-run partnership in Galle to frustrate the Australians.

The duo have patiently pushed Sri Lanka’s team total towards 80, rarely offering the Aussies any chances.

However, leg-spinner Mitchell Swepson did put down a tough return catch just before the tea break.

Oh dear, the Aussies have botched a run out opportunity in the 19th over.

Sri Lankan batter Kusal Mendis nudged a Pat Cummins towards mid-on before calling his partner through for a single, only to send him back and leave him stranded in the middle of the pitch.

However, Mitchell Starc’s throw at the stumps at the non-striker’s end went wide, gifting Sri Lankan captain Dimuth Karunaratne an extra life at the crease.

Cameron Green has pulled off a blinder at gully to help Australia claims its first scalp of the match.

But Green lunged high to his left, holding onto a classy catch.

Nissanka returns to the sheds for 6, with Kusal Mendis the new batter in the middle.

The Sri Lankans will go to the lunch break unscathed, surviving three overs of pace from Mitchell Starc and Pat Cummins before the interval.

The Australian innings has drawn to a close, with No. 11 Mitchell Swepson the last wicket to fall in Galle.

Steve Smith is left stranded on 145 not out, with the Australian vice-captain combining with Swepson for a handy 21-run partnership.

The Sri Lankan innings will get underway in about 10 minutes.

The left-arm spinner has become just the third Sri Lankan to take a six-wicket haul on Test debut, joining Upul Chandana and Praveen Jayawickrama on the illustrious list.

Jayasuriya’s latest victim was Nathan Lyon, who missed a straight delivery that smashed into his pads. A review couldn’t save him.

Steve Smith is running out of partners in Galle.

After impressing the Galle locals with some big-hitting in the series opener, Australian captain Pat Cummins has been removed for 5 on Saturday.

Sri Lankan paceman Kasun Rajitha struck Cummins on the back pad, with the on-field umpire ignoring the seamer’s pleas for LBW.

But after Sri Lanka called for a review, Hawkeye replays showed the Aussie was absolutely plumb.

Drinks are taken in Galle.

Cacophony of dunces: When the Supreme Court trashed the Constitution