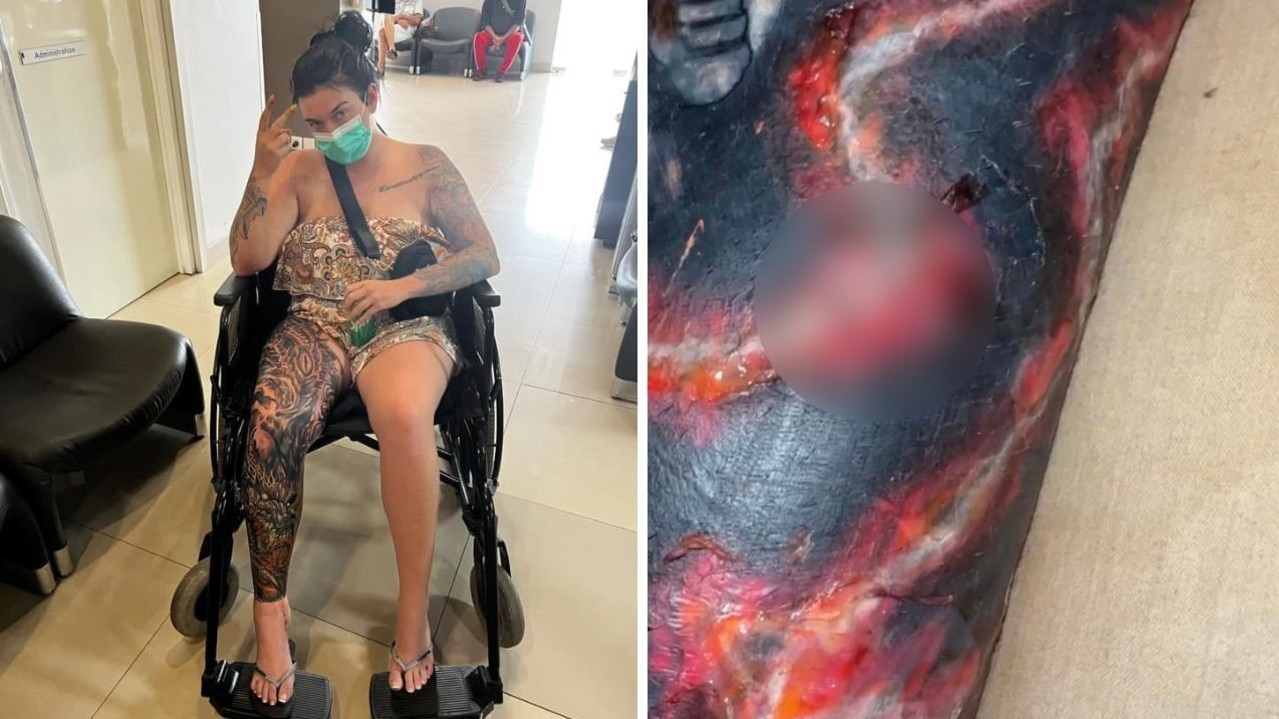 An Australian tourist’s trip to Bali has taken a nasty turn after she sufferd a painful injury on the holiday island.

Kelsey Foster, who recently attracted attention for the outfit she wore to a Balinese orphanage, shared how what she initially suspected to be an ankle sprain fast became something far worse.

The 28-year-old slipped on a tile but given it seemed mild, went ahead with a 12-hour tattoo sitting.

The pain however worsened and soon after, she was in a Bali hospital where she was given medication, crutches and a wheelchair, but told her ankle wasn’t broken.

Unable to manage the pain, she booked an emergency flight back to Australia for $4000 and sought immediate assessment from professionals in Newcastle, NSW.

She was ultimately delivered the news she had torn the ligament off her ankle and had a fracture up the outer side of her foot.

Adding to the pain was an infection from her new tattoo, which had been worsened by rubbing on the medical boot she had been wearing.

Doctors told her she may also have deep vein thrombosis – a blood clot in a deep vein – which meant she was not allowed painkillers.

“Sitting in excruciating pain is debilitating,” she said in a social media post.

“Trauma Infection in my ankle and leg, IV fluids, pain meds and a boot on my foot. Still waiting on bloods to see how bad and possible fracture in the side of the foot also which is harder to pick up on X-rays,” she wrote.

“I’m definitely not doing great, feeling like a hot mess. Leg’s going through a lot of trauma, I am exhausted.”

Ms Foster said the infection had not been caused by the tattoo studio, which she said was “awesome and super clean”.

“My ankle is badly hurt and my body’s under extreme trauma so the tattoo isn’t healing causing infection, possible DVT now in my leg going for more scans,” she wrote.

She is still awaiting the outcome of testing that will determine if she has blood clotting.

In a gruesome update shared online Tuesday, she revealed an ice pack she was using to cool her leg down got stuck and “when I removed it, it removed my skin down to proud flesh”.

“I spent about 20 minutes hysterically crying into Josh’s arms. The pain is absolutely exhausting and the fact I am incapable of doing anything is terrible.”

Ms Foster is recovering at home under the care of her husband.

Energy price cap rises to £4,279 – but Britons won’t have to pay that much | Business News

Supreme Court referendum ruling: Independence issue must be resolved democratically and peacefully (but not in the way Nicola Sturgeon suggests) – Scotsman comment

Thriller at 40: the album that made Michael Jackson a…