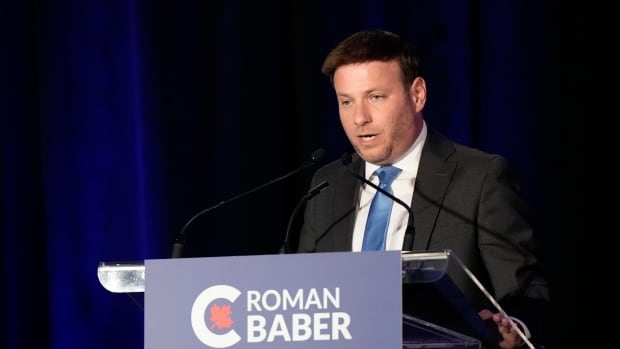 Roman Baber is asking Conservative party members to give him a second look — not just think of him as their second choice.

The former Ontario legislator — best known before the race for being removed from Ontario Premier Doug Ford’s caucus for opposing COVID-19 lockdowns in early 2021 — released a policy document Wednesday highlighting the promises he’s made around themes including democracy and natural resources.

Baber, who has broadened his fight of COVID-19 health measures to include vaccine mandates, points to pledges such as cancelling agricultural supply management and federal equalization payments to the provinces as “material differences” between himself and the two candidates he may find himself trailing on the ballot.

One of these candidates is Pierre Poilievre, the party’s long-time Ottawa-area MP and the contest’s perceived front-runner.

Another is Leslyn Lewis, a social Conservative MP from Ontario, who also speaks against COVID-19 health measures and in support of last winter’s convoy protests after placing third in the party’s 2020 leadership race.

“A lot of Conservative members appreciate that I took a principled position in defence of Canadians over the last couple of years when it was unpopular,” Baber said in a recent interview. “But they’re not prepared to mark me as their No. 1, as of yet.”

Baber’s now embarking on what he calls an “educational campaign” with party members on how the ranked balloting system works, telling them they don’t need to worry about splitting the vote.

He went on to ask voters to “switch” and pick him first.

As for his political future, Baber said he will make his decision once the race is over.

“We’re focused on a strong finish.”

Baber’s efforts to persuade members to support him comes as voting is underway and other candidates seek to do the same.

With the party having mailed most of the more than 670,000 ballots out to members, the process of vetting begins this week  — checking, for example, that members sent in a copy of their driver’s licence.

The results will be revealed in Ottawa on Sept. 10.

New Canadians are among the potential supporters some Conservative candidates have been reaching out to, a segment of the population insiders believe the party must attract.

Questions hang over what will happen to the thousands of new party members Patrick Brown claimed to have signed up before he was disqualified from the race. He ran a campaign focused on reaching out to Conservatives from racialized and immigrant communities. After he was ousted, Brown said ex-Quebec premier Jean Charest was best suited to defeat Poilievre.

A Black immigrant from Jamaica, Lewis recently emailed party members railing against what she described as the categorization of people under the label of the so-called ethnic vote.

Lewis said it’s a problem when people, including those inside the party, see voters as belonging to a single identity block.

“Patrick Brown could not deliver the ‘ethnic vote,'” she wrote. “He was free, as all of us leadership candidates are, to make an appeal to the Conservative values that they have. But they did not belong to him.”

Lewis went on to say that she is best suited to bring in the “so-called ethnic vote” to the Conservative party in the next election.

Sticking to seven healthy habits may almost halve your risk of suffering a stroke, study claims

Inside the Beltway: Student-debt cancellation prompts medical debt demands too