Balakrishna triumphs as Veera but not so much as Jai 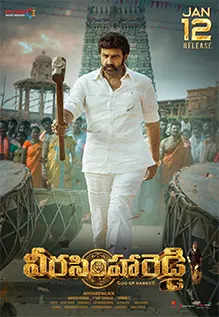 Story: A man grows up oblivious to the family dynamics that his parents have left behind in Rayalaseema. What happens when he goes back to the very thing they turned away from?

Review: Gopichand Malineni’s Veera Simha Reddy is purely for Balakrishna’s fans alone. There’s no two ways about it. Otherwise there’s only so much you can take of all the flying bodies, loud punch dialogues that are specifically written to elicit cheers and scene after scene that exists solely to showcase the titular character as nothing less than god.

Jai (Balakrishna) has grown up in Istanbul with only his mother Meenakshi (Honey Rose) for company. While his mother runs a Rayalaseema themed restaurant to stay true to her roots, he doesn’t know much about all the pain she left behind. When he falls for tone-deaf wannabe singer Isha (Shruti Haasan) and wants to marry her, he finds out more about his father Veera Simha Reddy (Balakrishna). He also finds out about Pratap Reddy (Duniya Vijay) and Bhanumathi (Varalaxmi Sarathkumar) who want his father dead. If you’ve seen the actor’s faction-laden films, what follows next is not hard to predict.

The way the titular character is written, you just know how it’ll all play out. All his fights are going to defy gravity, he’s going to bring on a mini earthquake whenever he enters a room and most importantly, he’s going to ooze swag even in a simple shirt-lungi while smoking a rolled cigar. And when the film is focused on Balakrishna playing him, you truly do not care about how everything playing out on-screen is something you’ve seen a million times before. Veera really keeps you hooked.

Where the film falters is whenever it shifts focus from him onto Jai and Isha or even Meenakshi. The songs are weaved into the narrative with no rhyme or rhythm and you’re just waiting for the film to progress while a duet or a special number is playing out on-screen. The dialogues get repetitive as the film progresses, giving you information you already have and testing your patience. However, it still works when the focus is brought back on Pratap or Bhanumathi. Logic (or physics) is not something to be expected from a masala-starrer like this but the way Veera approaches factionism is a head-scratcher. On one hand he doesn’t want the next generation to follow his footsteps, on the other…the less said the better.

Veera Simha Reddy, for all its retro touches, oddly defies norms when it comes to certain topics. A baby out of wedlock is not thought to be the end of the world, nor is a woman choosing her own partner in a conservative household. Families in this film seem anything but conventional. However, such moments are few and far in between. The cinematography by Rishi Punjabi and score by Thaman S add to the film, doing as much as Gopichand does to keep you engaged. But after you’ve seen Balakrishna fight off baddies with swag at least twice in the span of one hour, you kind of get bored of it. The length of the film is also a major spoilsport.

Veera Simha Reddy is Balakrishna’s film through-and-through. However, where he triumphs as Veera, he fails as Jai. Whenever the man comes on-screen donned is black is when you feel like paying attention, his cakey makeup and lukewarm performance while playing the other character takes away from it. Varalaxmi really comes a close second holding her own against him, proving to be a formidable foe and actor both, someone who can face him with ease. Duniya and Honey also pull off their roles well. After Krack one can’t help but feel like Gopichand did Shruti dirty. She gets a character that exists only to shake a leg, admittedly she does look stunning while doing it.

Given that the film is right on time for Sankranthi, some of the dialogues might not exactly make it a family-friendly watch. But if you’re a Balakrishna fan, this one’s for you.

My wife’s baseball obsession has gone too far

Harry Styles left red-faced as he splits trousers in front…

Recruiting for high-school football has changed and ‘it’s…

New Zealand: One dead as Auckland hit by entire summer’s…