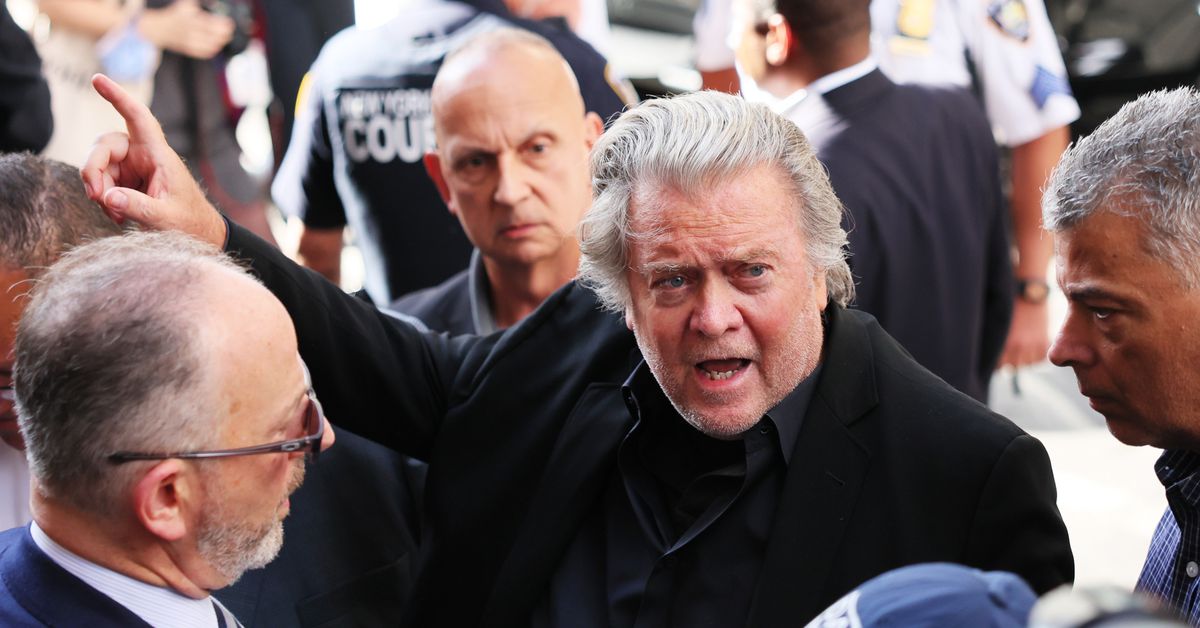 Steve Bannon, Trump ally and former White House adviser, surrendered himself to the Manhattan district attorney’s office on Thursday and is expected to face charges related to his role in an online crowdfunding effort to fulfill Trump’s promise to build a wall along the US’s southern border with Mexico, according to CNN.

Bannon and three others were previously arrested and charged with defrauding donors to their “We Build the Wall” online fundraising campaign. The group raised over $25 million to build a wall along the US-Mexico border, promising to use “100 percent” of donations to fund the wall’s construction. But the group was found to have paid more than $1 million to cover personal expenses, including boats, an SUV, and cosmetic surgery for founder and Air Force veteran Brian Kolfage.

The Washington Post reported Thursday that New York has charged Bannon with money laundering, fraud, and conspiracy for his role in the We Build the Wall group.

Bannon pled not guilty to the federal charges in 2020 and was later pardoned by President Trump for his role in the alleged scheme. However, New York launched its own investigation into Bannon and his partners shortly after the pardon came through. Because presidential pardons only apply to federal crimes, the state can still press its own charges. New York Attorney General Letitia James is expected to formally announce Bannon’s indictment later Thursday afternoon.

In a statement, Bannon called the state’s charges “phony,” according to CNN. “They are coming after all of us, not only President Trump and myself,” Bannon said in the statement. “I am never going to stop fighting. In fact, I have not yet begun to fight. They will have to kill me first.”

Kolfage launched the We Build the Wall as a GoFundMe campaign in December 2018, ultimately raising enough funds to construct a three-mile section of fence along the southern borders of Texas and New Mexico. By January 2019, Kolfage decided to raise the money through a new nonprofit organization called We Build the Wall Inc. The nonprofit’s board was composed of longtime Trump allies like Bannon and Kris Kobach.

Kobach allegedly used the organization’s email list to fundraise for his own US Senate campaign in Kansas.

In July, Bannon was found guilty of contempt of Congress for defying a subpoena from the House select committee in charge of investigating the January 6th, 2021, attack on the US Capitol. Bannon is expected to be sentenced later next month and could serve at least 30 days in jail.

Organ transplants are up, but the agency in charge is under fire

No. 14 Michigan State aiming for consistency against Akron