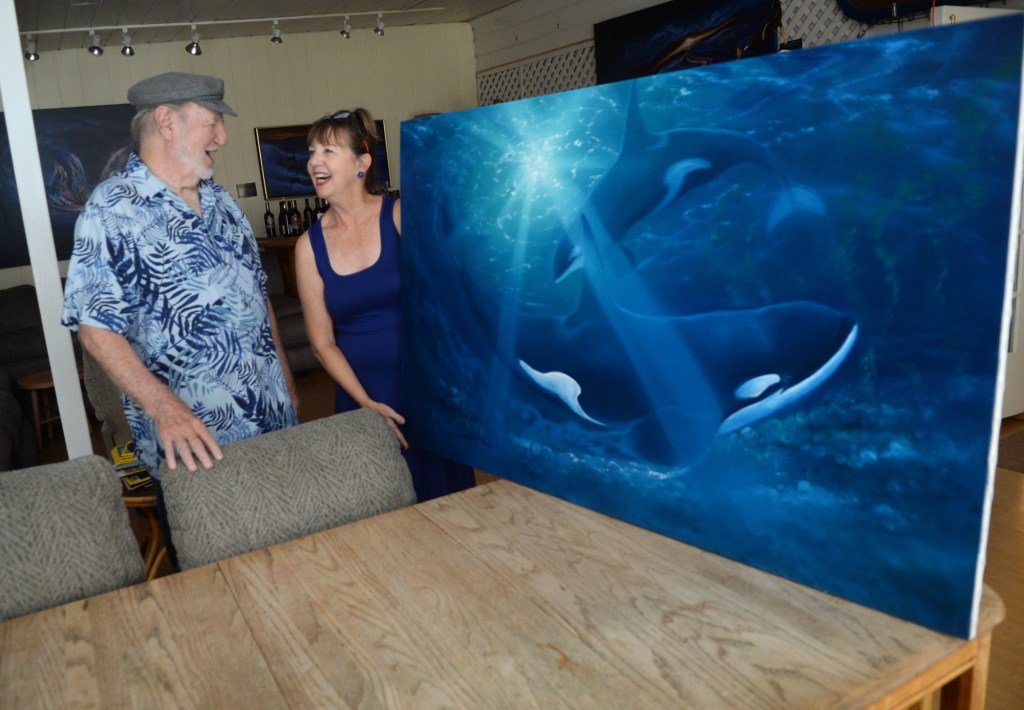 Twenty-six years ago, George Sumner, an artist in Marinwood, misplaced two of his paintings in the Pacific Northwest.

Earlier this month, through the workings of fate and United Parcel Service, they found their way back to his doorstep.

“I’ve always believed in karma,” said Sumner, 82. “I always believed the missing paintings would wind up in good hands somewhere. I’m deeply grateful that they ended up back in mine.”

The first of the images, a 3-foot-by-5-foot oil painting titled “Knights of Old,” shows orcas and rubbing stones in the ocean. It was valued at $15,000.

The second, at 2 feet by 4 feet, depicted an orca and two bottlenose dolphins. The painting, titled “Silent Knights,” was valued at $10,000.

Sumner created them as a favor to his friend Ken Balcomb, who was on the board of the Whale Museum, a natural history center in Friday Harbor, Washington. Summer specializes in environmental artwork.

“The story that I’ve been trying to paint for 50 years is about protecting the environment,” he said. “It’s primarily to educate people to respect and love nature. That’s what I’ve tried to express my entire career.”

In 1996, Balcomb held a benefit for the museum. Summer and his wife Donnalei, also an artist, packed up their van with about 18 paintings and drove to the benefit. Friday Harbor is north of Seattle and located on the coast of one of the San Juan Islands.

After the event was over, George Sumner loaded up the paintings, and the couple went onward to the next leg of their journey in Canada.

It wasn’t until weeks later, when they returned to Marin, that Sumner found out that two of his paintings were missing.

“He said, ‘I might have forgotten one or two,’” Donnalei Sumner said. “It’s not that we don’t love all our paintings, but sometimes they get lost in the shuffle.”

After making calls to a few friends and contacts, they discovered that a gallery owner in Friday Harbor named Doug Bison had picked up the paintings and featured them in his gallery. Bison said he would try to sell the paintings or return them if he couldn’t, but he and the Sumners did not maintain regular contact over the years. Bison later moved to a new gallery in the area.

In 2019, Bison’s partner contacted the Sumners to report that he had died, but that he had remained in possession of the paintings.

Through their daughter and her husband, the Sumners came into contact with an artist named Richard Nisonger, who said he would acquire the paintings for them and endeavor to send them back or sell them. But ill-fortune struck again – weather, COVID-19 and a health scare for Nisonger – and hampered the return of the paintings. For another couple years, the paintings lingered on Camano Island, another site in northwest Washington.

Nisonger was able to get the paintings to a UPS store in nearby Stanwood, where they lingered for months. The store was in danger of closing and was often without employees. The Sumners weren’t sure if the paintings were ever coming back.

But on July 1, the Sumners opened their door to find two neatly wrapped packages on their porch. It cost the Sumners $737 for the shipping, but the money seemed trivial after 26 years, Donnalei Sumner said.

“It was a calamity of things that happened, but to have his two babies come back to him, when we showed them to him, George was thrilled,” she said. “They started in Washington and ended up back where they were painted.”

For now, the paintings remain with the couple. They said they might try to sell them, but, for now, they are pleased to reminisce in their presence.

“You need to really trust that people are good. You will get returned what is yours,” Donnalei Sumner said. “As long as we help each other and believe in each other, the karma is there,” she said.

Fifa 23: Get the game for free when you buy an Xbox series S