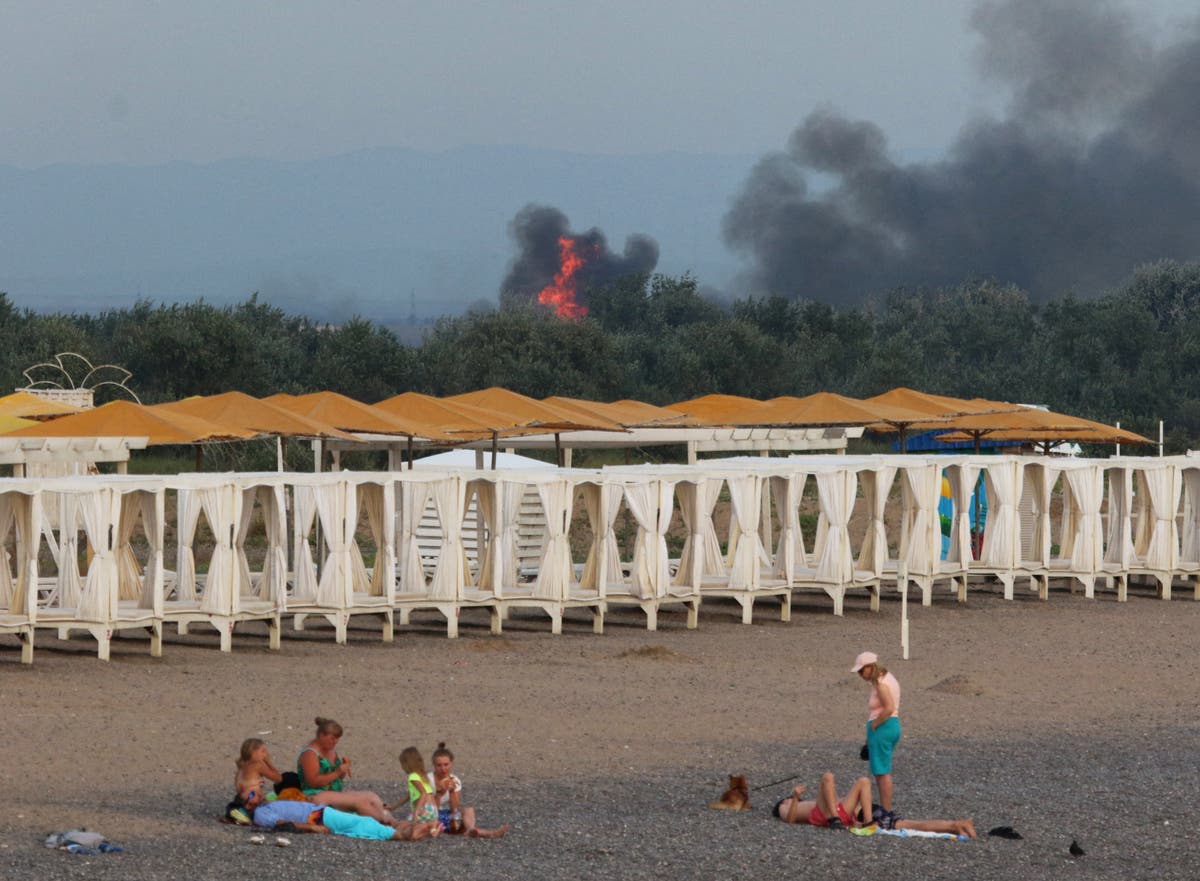 powerful explosion rocked a Russian air base in Crimea, killing one person and wounding several others, while sunbathers watched on.

Russia’s Defense Ministry said munitions blew up at the Saki base. Ukraine has denied responsibility.

Videos posted to social media showed sunbathers fleeing a nearby beach as huge clouds of smoke from the explosions rose over the horizon.

The headquarters of Russia’s Black Sea Fleet in the Crimean port of Sevastopol was hit by a small-scale explosion delivered by a makeshift drone last month in an attack blamed on Ukrainian saboteurs.

Crimea’s head Sergei Aksyonov said ambulances and medical helicopters were sent to the Saki air base and the area was sealed off.

One person was killed, according to the regional leader of Crimea, Sergei Aksyonov.

Earlier authorities reported that five people were wounded, with one of them hospitalised and the others treated for cuts from shards of glass and released.

Officials in Moscow have long warned Ukraine that any attack on Crimea would trigger massive retaliation, including strikes on “decision-making centers” in Kyiv.

The Saki base was used by Russian warplanes to strike areas in Ukraine’s south on short notice.

Earlier on Tuesday, Ukrainian officials said that at least three Ukrainian civilians were killed and 23 wounded by Russian shelling in 24 hours, including an attack not far from the Russian-occupied Zaporizhzhia nuclear power plant.

The Russians fired over 120 rockets at the town of Nikopol, which is across the Dnieper River from the plant, Dnipropetrovsk Gov. Valentyn Reznichenko said. Several apartment buildings and industrial sites were damaged, he said.

Ukraine and Russia have accused each other in recent days of shelling the power station, the biggest nuclear plant in Europe, stoking international fears of a catastrophe.

In his nightly video address, Ukrainian President Volodymyr Zelenskyy called for new sanctions against Russia, accusing it of risking another nuclear disaster.

“We are actively informing the world about Russian nuclear blackmail,” he said.

The Kremlin claimed that Ukraine’s military was attacking the plant and urged Western powers to force Kyiv to stop.

The Ukrainians in recent weeks have been mounting counterattacks in Russian-occupied areas of southern Ukraine while also trying to hold off the Kremlin’s forces in the country’s industrial Donbas region in the east.