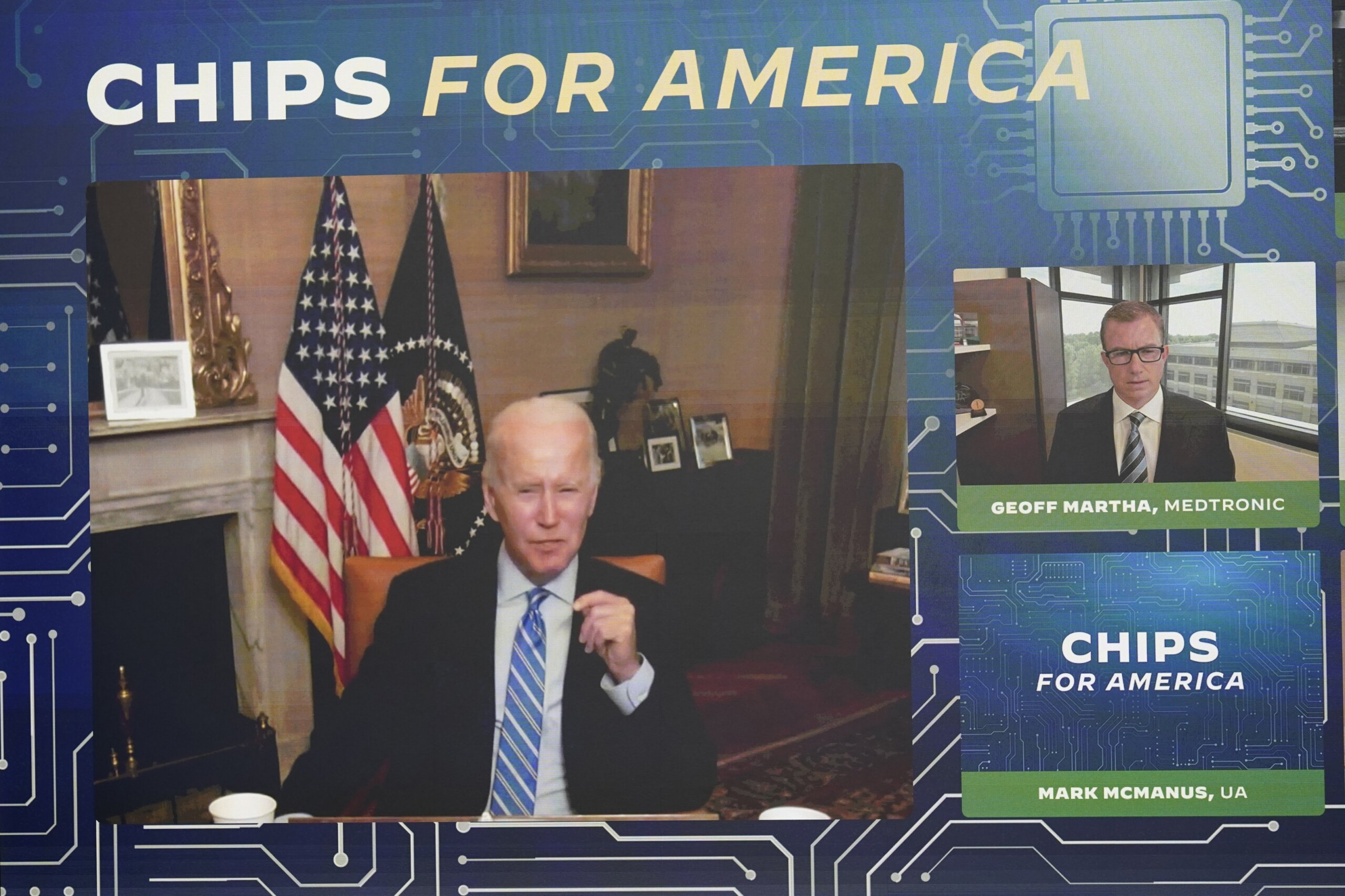 WASHINGTON (AP) — Calling semiconductors “the building blocks for the modern economy,” President Joe Biden on Monday asked Congress to move quickly and send him a bipartisan bill designed to boost the computer chips industry and high-tech research in the United States.

The Senate was originally expected to take a critical vote in the evening to advance the legislation, but Senate Majority Leader Chuck Schumer, D-N.Y., announced that storms on the East Coast had disrupted travel plans for several senators and that he would be delaying the vote until Tuesday morning. The bill needs support from at least 60 senators to clear procedural hurdles and place it on a path to final passage later this week, giving Biden a signature win on legislation his administration says is necessary to protect national security and help the U.S. better compete with China.

The bill provides about $52 billion in grants and other incentives for the semiconductor industry as well as a 25% tax credit for those companies that build chip plants in the U.S. Supporters say those incentives are necessary to compete with other nations that are also spending billions of dollars to lure manufacturers.

The pandemic has underscored how much the United States relies on semiconductor manufacturers abroad to provide the chips used in automobiles, computers, appliances and weapons systems. The Biden administration has been warning lawmakers they need to act before leaving for their August recess to ensure the companies invest in U.S. fabs instead of building the plants elsewhere.

Biden, who is still recovering from COVID-19, held a virtual roundtable with members of his administration and industry leaders about the merits of the bill. He said that a shortage of semiconductors was the primary driver of rising automobile costs, which are a core component of the inflation gripping the country.

Biden said the U.S. relies on Taiwan for the production of the most advanced chips and that China was also starting to move ahead of the U.S. on the manufacturing of such chips.

Commerce Secretary Gina Raimondo told him that chip manufacturers are finalizing investment plans and that money provided through the bill will be instrumental in their decision.

”We know they will expand, because they have to in order to meet demand. There’s no question about that,” Raimondo told Biden. “The question is, where will they expand? And we want them, we need them to expand here in the United States.”

The leaders of Medtronic, a medical device maker, as well as Cummins Inc. and defense contractor Lockheed Martin, pitched the president on the need for the bill as well.

“Like others at the table, we are facing a supply chain crisis. We are unable to get the components we need and semiconductors is always at the top of the list,” said Tom Linebarger, chairman and CEO of Cummins Inc., which makes diesel engines.

Linebarger said the company is now paying brokers as much as 10 times the regular cost to get the computer chips it needs. The federal government’s investments through the bill would move manufactures from “wringing our hands about where we sit in competition with others to actually moving onto the field and helping U.S. manufacturers compete,” he said.

Overall, the bill would increase U.S. deficits by about $79 billion over the next 10 years, according to the Congressional Budget Office. The bill also authorizes about $200 billion to advance high-tech research in the U.S. over the coming decade. Congress must approve that funding as part of future spending bills and the CBO did not include that research money in its deficit projection.

Critics have likened the spending to “corporate welfare” and have said the money would be better spent on other priorities or not at all. Sen. Bernie Sanders, I-Vt., said he doesn’t hear from people about the need to help the semiconductor industry. Voters talk to him about climate change, gun safety, preserving a woman’s right to an abortion and boosting Social Security benefits, to name just a few.

“Not too many people that I can recall — I have been all over this country — say: ‘Bernie, you go back there and you get the job done, and you give enormously profitable corporations, which pay outrageous compensation packages to their CEOs, billions and billions of dollars in corporate welfare,’” Sanders said.

Once the Senate has acted, the bill will be taken up in the House. The window for passing the bill is narrow if some progressives join with Sanders and if most Republicans line up in opposition based on fiscal concerns. But House Speaker Nancy Pelosi, D-Calif., has said she’s confident that it will have enough support to pass before lawmakers leave Washington for the August recess.