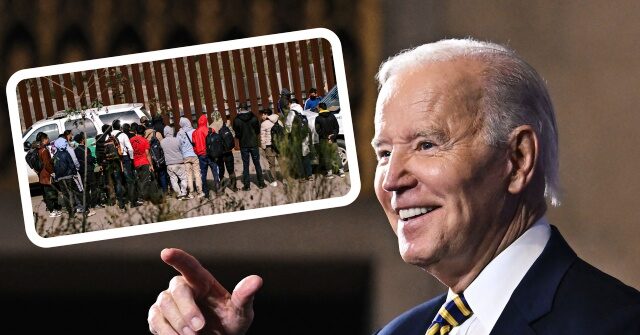 For 2021, Steven Kopits with Princeton Policy Advisors accurately projected that about two million border crossers and illegal aliens would be apprehended. By this year’s end, Kopits projects about 2.3 million will have been apprehended. These estimates do not include the hundreds of thousands, potentially millions, who will successfully cross the southern border.

Now, Kopits projects that Biden’s policies will see 2.6 million border crossers and illegal aliens apprehended along the border in 2023 — another record-shattering annual level of illegal immigration.

If the projections pan out, some 6.9 million border crossers and illegal aliens will have been apprehended at the border since 2021 to 2023 under Biden. This is a foreign population just two million short of New York City’s resident population.

“… based on the last two months, 2023 should set yet another record for illegal border crossing — and by a substantial margin over 2022,” Kopits writes. “This coming March, April and May in particular could post some spectacularly ugly numbers.”

Kopits writes that until Republicans win critical House and Senate seats, along with the presidency in 2024, “Democrats will set the political agenda, and the border is likely to remain wide open.”

In just days, the Centersfor Disease Control and Prevention’s (CDC) Title 42 public health authority will end after the Biden administration refused to appeal a ruling that struck down use of the order. Title 42 has been used at the border since early 2020, allowing Border Patrol agents to quickly remove millions of illegal aliens from the U.S.

As Biden officials reportedly worry that an open borders narrative across the world will drive a record-breaking level of illegal immigration, those officials now estimate that about 9,000 to 14,000 border crossers and illegal aliens will arrive daily at the border when Title 42 ends.

Breitbart News recently reported that thousands of migrants are waiting in Mexico to rush the U.S. border when Title 42 ends in weeks. As part of the plan to deal with a record level of illegal immigration, El Paso, Texas, officials have asked Biden to open Fort Bliss as a migration intake center.

Previously, Biden officials admitted that up to half a million border crossers and illegal aliens — the equivalent of the population of Atlanta, Georgia — could arrive at the border every month.

Less than Half of Americans Have High Confidence in Military

What is Alexa? Here’s the ultimate guide to the Amazon Echo smart speakers