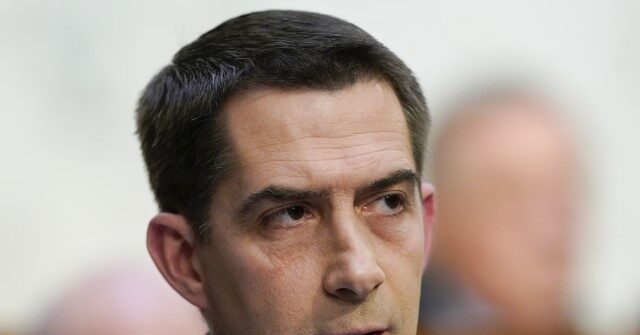 Cotton said the JCPA, if enacted as law, would form a “cartel” between technology and media companies leading to “an avenue for censorship” of Breitbart News.

“Cartel is a good description of it,” Cotton stated, because the JCPA would provide “an explicit exception to the anti-trust rules against cartels between competitors in an industry. The bill recognizes that there’s a genuine problem of Big Tech companies taking advantage of publishers, especially so many of the smaller newspapers, television stations, [and] radio stations that we have in a state like Arkansas.”

He remarked, “But I don’t think this bill is the solution to it, authorizing a lot of outlets to join together in a kind of cartel to negotiate with these tech companies. One of my biggest concerns is [use of the] cartel’s organizations as an avenue for censorship.”

“Breitbart has seen this,” Cotton said. “Your content is also abused by Big Tech. My understanding is you’ve been refused participation in this kind of organization, and in fact the bill’s advocates are pitching it to Democrats in Congress as we speak as a way to combat misinformation.”

Marlow emphasized the nebulous and subjective parameters of the word “misinformation,” which the JCPA’s proponents claim is a target of the bill.

Cotton asked, “Well, guess what they think misinformation is? Do they think it’s the lies that Big Tech told about Hunter Biden’s laptop in the weeks before the election in 2020? No, they think it’s basically anything that gets published on Breitbart or other conservative outlets.

“But I do think that’s probably what a lot of senators are hearing from, are their small newspapers across their states.”

Cotton rejected characterizations of the JCPA as a boon for “small” news media outlets. He said, “It would empower anything but small companies, like companies that are reporting on genuine local news — crime, courthouse, school boards, and local sports. It would empower the Big Tech companies and these left-wing outfits that are really just designed to push ideological goals, not to promote news gathering in our communities across the state of Arkansas.”

He emphasized, “I don’t think that creating this kind of cartel — that will then be used against ideological opponents of the progressive left in America — is the right way to go.”

Cotton concluded by predicting the JCPA’s defeat in the Senate.

“I think it’s probably dead on the Senate floor,” he assessed, “but it won’t be getting to the ten Republicans — at least — that it needs to get the sixty-vote threshold on the Senate floor. So I feel pretty good about where we’re at today, but we’re gonna be vigilant.”

Samsung launches its first credit card in partnership with Axis Bank and Visa: All…