Billed as an uprising to ‘retake power’ in Brazil, pro-Bolsonaro protests fizzle 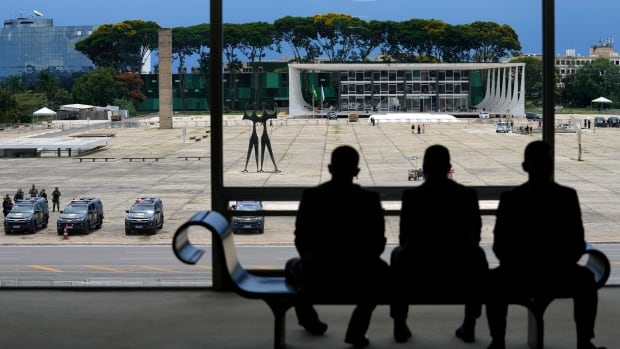 Skittish Brazilian authorities on Wednesday spared no effort to boost security in the face of social media promotion of a “mega-protest to retake power” in two dozen cities. Whether because of preventative measures adopted or not, the supposed uprising was a dud.

Less than 10 protesters showed up along Rio de Janeiro’s Copacabana beach; there were more journalists in attendance, plus 29 police vehicles. On Brasilia’s esplanade surrounded by federal government buildings, authorities had designated an area for protest and stationed police and national guard troops.

However, just one couple showed, dressed in the same Brazil soccer jerseys that thousands of rioters wore four days earlier when they stormed the country’s Congress.

“We were surprised to be the only ones here today,” said Eunice Carvalho, a 58-year-old housewife joined by her husband. “People got scared after the imprisonments, which were excessive.”

Speaking to journalists in Brasilia earlier, the federal appointee who has assumed control of the capital’s security said police were shutting down the main avenue to traffic, limiting pedestrian access with barricades and blocking all access to the square that was the site of Sunday’s mayhem.

“The right to protest freely will always be respected and cannot be confused with terrorism,” said the official, Ricardo Cappelli.

‘I myself fear persecution’

Citing the call to protest, a Supreme Court justice ordered local authorities in cities across Brazil to prevent protesters from blocking roads or occupying public spaces and buildings.

Justice Alexandre de Moraes also ordered arrests and fines for people and companies who participate or help with logistics and funding.

WATCH | Over 1,500 arrested in Brazil after government buildings stormed:

Over 1,500 arrested in Brazil after government buildings stormed

More than 1,500 people have been arrested in Brazil after government buildings in the country’s capital were stormed by supporters of far-right former president Jair Bolsonaro. Bolsonaro has denied involvement in the violence, and remains in Florida.

The all-hands response — and the subsequent tranquility — underscored just how jumpy authorities remain after supporters of former president Jair Bolsonaro rampaged through Congress, the Supreme Court and the presidential palace on Sunday, laying ruin to the government’s three most important buildings.

Officials arrested or detained some 1,500 people by the following morning, hundreds of whom were sent to prison.

Though there is no evidence of fraud in the Oct. 30 presidential election, the protesters have claimed the true winner was far-right Bolsonaro. He has fired up his base about the vulnerability of electronic voting machines despite independent experts’ assurances they are closely scrutinized.

The call for a fresh uprising Wednesday sparked concern that the crackdown hadn’t damped the will of radicals.

Among those who vow to continue struggling is Daniel Bressan, 35, who travelled some 300 miles from the interior of Parana state to join Sunday’s protest in Brasilia.

He was detained by police the next morning, though he denies participating in any of the vandalism.

“A lot of people are going to be afraid to go to the streets and be arrested — I myself fear persecution by the legal system — but I’m not going to stop fighting and I’m not going to get discouraged,” Bressan said by phone from the federal police’s temporary holding centre.

“I’m ready for everything. Our freedom is worth more than our lives.”

Jailing rioters represents only part of the government’s effort to hold people responsible, with authorities also seeking to track down those who enabled the uprising.

That includes organizers who summoned protesters to the capital and paid their way, as well as local security personnel accused of either standing by and allowing the destruction to occur, or even taking part in protests themselves.

Justice Minister Flavio Dino told local media this week that authorities have identified some of the protest’s financiers.

He said they are based in the south and centre-west regions that Bolsonaro carried in the election. Without identifying individuals, he said they are members of the agribusiness sector, local business owners and people registered to own firearms.

Dino previously said the riot was apparently intended to spark a domino effect around the country. He has referred to the encampments that had been set up by Bolsonaro supporters outside military buildings to call on the armed forces to overturn election results as “incubators of terrorists.”

Authorities cleared away the camps in Brasilia and other cities after the rioting.

Lula sworn in as Brazil’s president for historic 3rd term

Luiz Inácio Lula da Silva was sworn in as Brazil’s president for a historic third term amidst a carnival-like backdrop commemorating his return to power. But he assumes the presidency of a country in turmoil, and not everyone is celebrating his return.

In November, the Supreme Court froze 43 bank accounts of people accused of having financed roadblocks that disrupted highway traffic in the wake of Lula’s victory. At least 30 were in the centre-west state of Mato Grosso, Brazil’s top soybean producer.

De Moraes, the Supreme Court justice, also ordered preventive detention for the men who were serving Sunday as head of the federal district’s security and military police chief, as well as searches of their residences. Both men have been fired since the rioting.

“Absolutely NOTHING justifies the omission and collusion of the security secretary and the military police commander,” de Moraes wrote in his decision, which was made public late Tuesday.

“There are strong indications that the conduct of criminal terrorists could only have occurred with the willful participation or omission — which will be determined in these investigations — of the aforementioned public authorities,” de Moraes wrote.