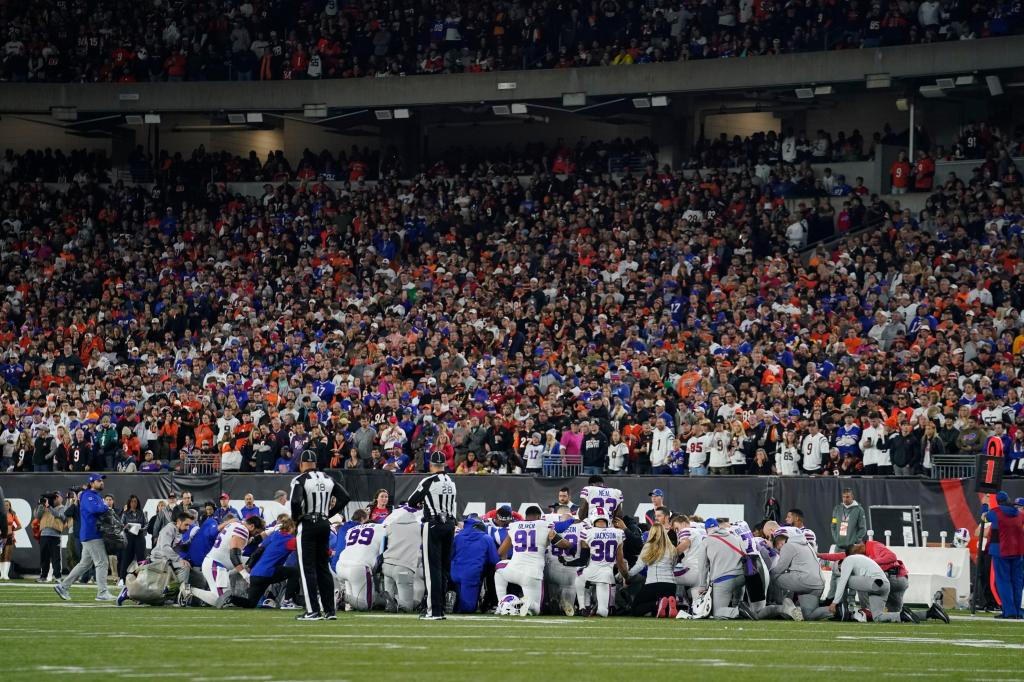 Buffalo Bills safety Damar Hamlin suffered a cardiac arrest in a horrifying scene that played out during Monday Night Football in Cincinnati. The second-year player had his heartbeat restored on the field and is currently sedated and listed in critical condition at the University of Cincinnati Medical Center, the Bills announced early Tuesday morning.

Hamlin’s dire situation led to the postponement of the Bills’ and Bengals’ MNF game.

Players and coaches were in tears on the field surrounding Hamlin as he received CPR on the field in Cincinnati after collapsing following a first-quarter tackle. He was then placed on a stretcher and taken to the hospital.

Hamlin’s mother was at the game and traveled with him in the ambulance to the hospital, per ESPN.

The NFL initially planned to resume the suspended game after a five-minute warmup, according to the ESPN broadcast. But Bills head coach Sean McDermott and Bengals head coach Zac Taylor intervened, conferred and brought their players back to their locker rooms.

NFL executive Troy Vincent denied the ESPN report that the league was planning on restarting the game.

“It never crossed our mind to talk about warming up to resume play,” Vincent said. “That’s ridiculous. That’s insensitive. That’s not a place we should ever be in.”

Eventually, the league announced at 10:01 p.m. ET that the game had been postponed — 66 minutes after Hamlin collapsed.

“Tonight’s Buffalo Bills-Cincinnati Bengals game has been postponed after Buffalo Bills’ Damar Hamlin collapsed,” NFL commissioner Roger Goodell announced in a league statement. “Hamlin received immediate medical attention on the field by team and independent medical staff and local paramedics. He was then transported to a local hospital where he is in critical condition.

“Our thoughts are with Damar and the Buffalo Bills,” the statement continued. “We will provide more information as it becomes available. The NFL has been in constant communication with the NFL Players Association which is in agreement with postponing the game.”

Hamlin collapsed after tackling Bengals receiver Tee Higgins on a 13-yard gain in the first quarter. Hamlin stood up after making the tackle but then fell on his back in a frightening scene.

The game was stopped at 5:58 of the first quarter as medical personnel began to frantically tend to Hamlin, a second-year player out of McKees Rocks, Pa., and the University of Pittsburgh.

Hamlin was drafted in the sixth round by the Bills in 2021, played in 14 games as a rookie and became a starter this year. Entering the game, Hamlin had 91 tackles, including 63 solo tackles and 1 1/2 sacks.

A chilling message in white lettering stayed up on the black big screen in the stadium: “The game is temporarily suspended. Please stand by for further information.”

An outpouring of team and player support flooded social media.

More than $1 million poured into Hamlin’s GoFundMe charity page for The Chasing M’s Foundation Community Toy Drive that originally intended to raise $2,500 to benefit a daycare center in his hometown.

“Damar Hamlin is the best of us. We love you, 3. Praying for you,” the University of Pittsburgh tweeted.

“Praying for Damar Hamlin and the entire Buffalo Bills organization,” tweeted the Giants, whose GM Joe Schoen and coach Brian Daboll both were with the Bills last season when Buffalo drafted and played Hamlin as a rookie.

“You got me in tears twin … I love you man,” Giants corner Nick McCloud wrote on Instagram, with a photo of both players when they were teammates with the Bills.

“The NFLPA and everyone in our community is praying for Damar Hamlin,” the players’ union said in a statement. “We have been in touch with Bills and Bengals players, and with the NFL. The only thing that matters at this moment is Damar’s health and well being.”