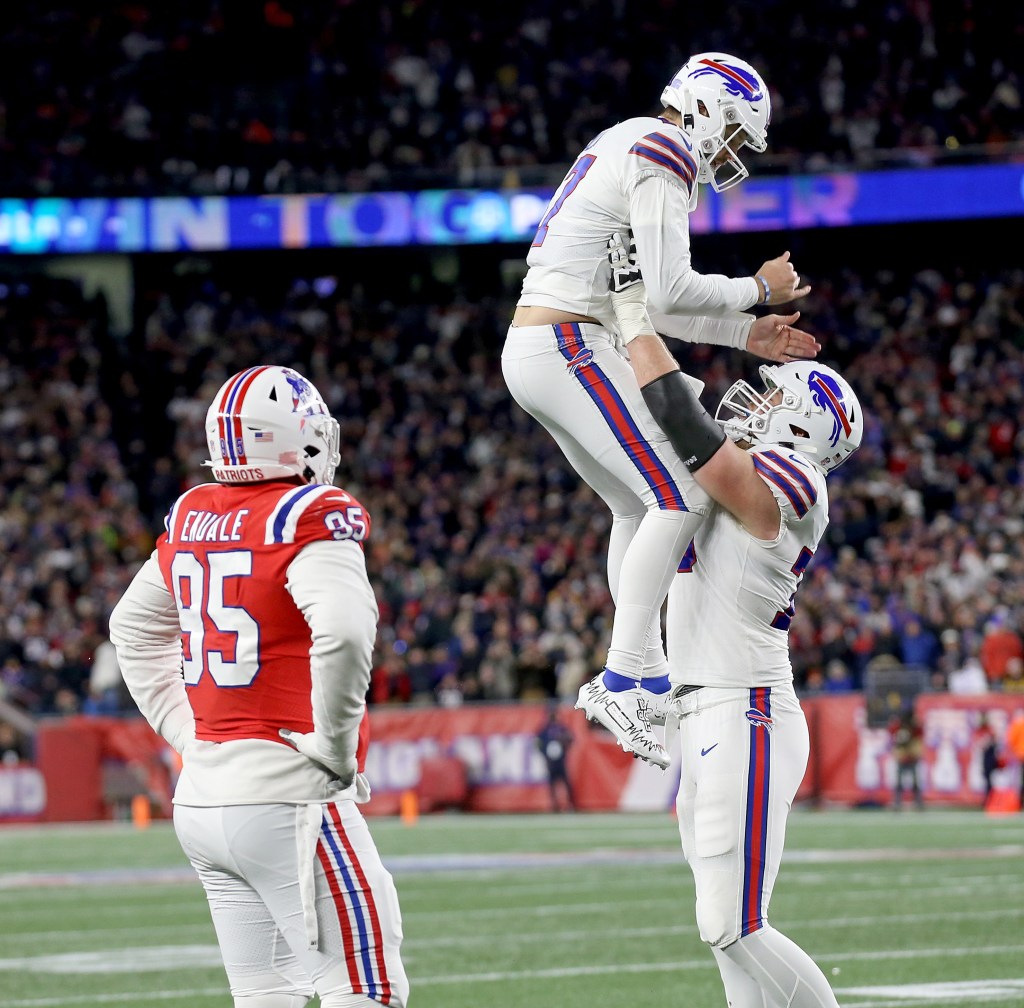 FOXBORO — One by one, the old Patriots axioms fell Thursday, a crumbling facade for a suddenly average franchise.

Josh Allen out-witted and out-worked the Patriots for the fifth time in six tries, extending plays beyond Belichick’s control until he had the game firmly in his grasp by the fourth quarter.

And the Pats playing their best football after Thanksgiving?

Including their holiday loss the last week, the Patriots are now 0-2 with five games remaining that will determine whether they’re a winning team; a fact once taken for granted in New England like the hard-earned habits underpinning the entire operation.

The Pats rolled over 24-10 against the Bills on Thursday night, leading for all of 4:55 in a defining game. Allen went 22-of-33 for 223 yards and two touchdowns. Rookie cornerback/returner Marcus Jones scored the Patriots’ only touchdown while making his offensive debut in the first quarter.

After that, it was all Buffalo.

The Bills (9-3) totaled 358 yards in a balanced effort, while the Pats offense struggled to reach 242. Diggs and Bills wideout Gabriel Davis (two catches, 15 yards) both caught touchdowns before running back Devin Singletary scored another in the second half.

Patriots quarterback Mac Jones finished 22-of-36 for 195 yards and a touchdown. Jones also had an interception overturned by review in the second half, when his offense punted twice and kicked a meaningless field goal inside the two-minute warning.

Trailing 17-7 near halftime, Jones and Co. botched a two-minute drill they started at their own 42-yard that could have pulled them within a possession. Instead, after calling three runs over their next four plays, the Pats were out of timeouts facing first-and-10 at Buffalo’s 33.

Then, two incompletions, three snaps and four yards gained later, one of their longest drives of the night ended with a missed field goal.

The Patriots (6-6) will now take an extended break before they return next week to begin preparing for a Monday night game at Arizona on Dec. 12. Any hopes of making the division race interesting are now gone, and Wild Card playoff hopes are fading.

After a game-opening three-and-out, the Pats flipped Marcus Jones from special teams to offense on their second possession. It took Jones one snap to make a case for more playing time.

Catching a bubble screen left at midfield, he took one jab step and out-raced the entire Bills defense 48 yards to the end zone. His touchdown gave the Patriots their first lead over Buffalo in more than two games and almost a full calendar year. But it wouldn’t last.

The Bills cruised 60 yards over nine plays, and opened the second quarter with an 8-yard Allen touchdown pass to Diggs. After another Patriots punt, Allen took the scenic route back to the end zone on a 14-play series. His last snap was a spectacular extended play, where he rolled right and drifted backwards on third-and-goal at the 8-yard line.

With Pats linebacker Mack Wilson in his face, Allen leapt near the sideline and ripped a touchdown pass to Davis before landing out of bounds. Again, the Patriots punted, and thanks to a Diggs incompletion, Buffalo returned the favor for the first time in 24 possessions.

And yet even after an ensuing strip sack of Allen, the Pats couldn’t find the scoreboard with their two-minute drill before the half. Kicker Nick Folk booted a 48-yard try that crashed on the crossbar with 10 seconds left, and Buffalo eventually knelt out the clock.

Defensively, the Patriots held the Bills to one score after halftime, but could never regain control. And instead of chasing a win late, facing a fourth down and 17-point deficit at midfield with 12:30 remaining, Belichick waved the white flag. He had read this script before, and knew how it ended.

Here were the best and worst Patriot performances from Thursday:

WR/CB/KR Marcus Jones He scored the Patriots’ only touchdown.

CB Jonathan Jones The Pats’ No. 1 cornerback was in the area on Allen’s two touchdown passes and several Diggs catches. Jones had a tough task and a tougher night.

Coaching The Patriots couldn’t contain Diggs or execute a two-minute drill. That comes back to Belichick and staff.

Patriots’ Damien Harris Chooses Planned Parenthood for ‘My Cause, My Cleats’ Promotion