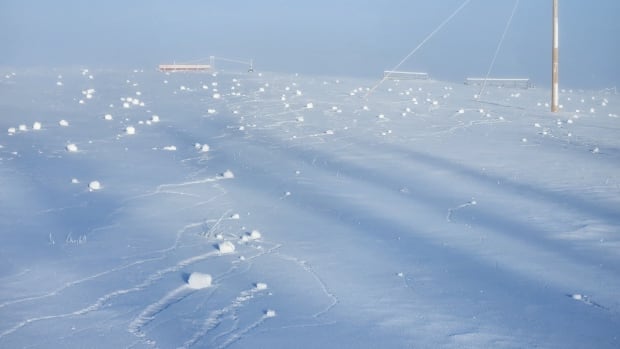 Even on the coldest and snowiest days and nights, our planet never fails to produce some incredible sights.

Here’s a few of them you can take in this winter.

It’s a freezing cold day and you look up into the sky. What are those rings around the sun?

They’re called sun dogs. Although the etymology of the term is a bit obscure, the formation itself is easily identifiable.

The 22-degree halos form when the sun passes through ice crystals suspended in the air, according to Samantha Lawler, a professor of astronomy at the University of Regina.

“The ice crystals can either be up in cirrus clouds at very high altitude, or they can be very close to the ground,” said Lawler.

It doesn’t necessarily have to be cold to see sun dogs. Lawler said higher altitude sun dogs can develop in warmer climates.

“I’ve seen pictures of them in the middle of the hot desert, because at high altitude it’s still very cold,” she said.

Sun dogs are just one of numerous halos that form around the sun and moon.

A constant weather feature on the Prairies so far this year, rime ice is often confused with hoar frost.

While hoar frost forms on clear, cold nights through a process called deposition — where water vapour transitions to ice, skipping the liquid phase — rime ice forms when there’s a dense layer of fog.

Water droplets that form fog freeze when the temperature drops below 0 C. If they freeze after they’ve landed on things like tree branches or light poles, the results can be breathtaking.

It can be costly. Rime ice can weigh down power lines, causing widespread outages, like one that happened in Saskatchewan in 2018.

These are like winter tumbleweeds. They’re snowballs that are formed naturally — not by humans.

The snow rolls along the ground and can take the shape of many things, including pastry rolls.

“I saw hundreds of them in the fields,” Leugner said. “I thought it was quite unique to see something like that.”

Her friend snapped a photo of one snow roller that measured more than 30 cm in diameter.

According to Terri Lang, a meteorologist at Environment and Climate Change Canada, three key ingredients are needed to make snow rollers form.

“Generally you need fresh snow,” said Lang. “And you have to have pretty mild temperatures as well, so that the snow is sticky.

“And if the winds are persistent, too — not so much gusty winds, but a persistent wind pushing it — it helps to make those rollers and keep them going.”

The phenomenon is rather rare, but not unheard of. They appeared after a storm a couple of years ago in Saskatoon, and a few years ago in Ottawa.

This type of mirage makes objects in the distance look distorted — even appearing as if they’re floating or upside down.

It’s most commonly seen in Canada during the winter, when warm air — from Chinook winds, for instance — meets our typical cold, winter air mass.

The temperature difference bends light waves above ground level. The bending gives objects that wonky appearance. Although typically seen on land, it can also be seen on water.

You can see the aurora borealis at almost any time of the year, but winter is particularly good.

Kathryn McWilliams, a professor of physics and engineering physics at the University of Saskatchewan, said longer winter nights provide better lighting for the aurora. The weather also helps too.

“We tend to have clear skies in the winter,” said McWilliams. “It makes it cold to go out and watch them, but it makes them more visible.”

She also noted that the sun is currently near the peak of an 11-year cycle, which means more solar activity is likely. With solar activity driving the aurora, there’s a good chance it will be more frequent over the next couple of winters.

The best time to see the lights, according to McWilliams, is closest to the spring and fall equinoxes in March and September, because there’s more solar activity during this time.

These are just the tip of the iceberg, so to speak, when it comes to winter phenomena. With others including pancake ice on water and light pillars in the night sky, there’s a lot of potential winter wonder to scare away your seasonal blues.