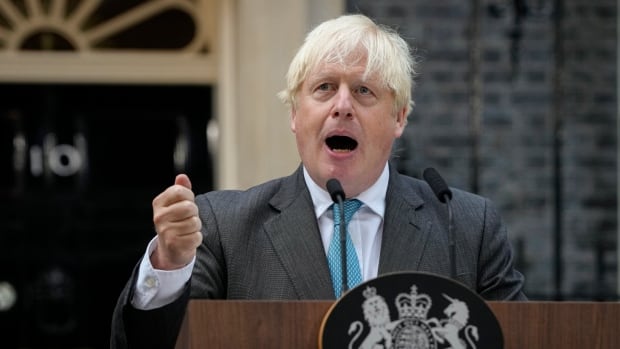 British Prime Minister Boris Johnson has arrived at Queen Elizabeth’s estate in Scotland to formally offer his resignation to pave the way for Liz Truss to succeed him amid an acute cost-of-living crisis facing the country.

Johnson will finally leave office following a carefully choreographed audience with the monarch at Balmoral that is taking place two months after he announced his intention to step down.

Truss, who was named leader of the ruling Conservative Party on Monday, will be appointed prime minister during her own meeting with the Queen a short time later.

Speaking outside his Downing Street office early Tuesday before heading to Scotland, Johnson said his policies had given Britain the economic strength to help people weather the energy crisis. He signed off with his typically colourful language.

“I am like one of those booster rockets that has fulfilled its function,” Johnson said. “I will now be gently re-entering the atmosphere and splashing down invisibly in some remote and obscure corner of the Pacific.”

But he was forced out of office by a series of scandals that culminated in the resignation of dozens of cabinet secretaries and lower-level officials in early July. He alluded to that downfall in his leaving remarks, saying he was handing over the baton to Truss in “what has unexpectedly become a relay race.”

Johnson will formally step down when he meets Elizabeth at Balmoral, her summer retreat in Aberdeenshire.

This is the first time in the Queen’s 70-year reign that the handover of power is taking place at Balmoral, rather than at Buckingham Palace in London. The ceremony was moved to Scotland to provide certainty about the schedule because the 96-year-old Queen has experienced problems getting around that have forced palace officials to make decisions about her travel on a day-to-day basis.

Truss, 47, takes office a day after the Conservative Party’s 172,000 members elected her to lead.

On Tuesday afternoon, she is expected to make her first speech as leader of a nation of 67 million people who are anxious about soaring energy bills and a looming winter of recession and labour unrest. Those problems have festered for the past two months, because Johnson had no authority to make major policy decisions after announcing his plan to step down.

CBC News will carry a live stream of the speech from Downing Street starting at 11 a.m. ET in this file.

Bronwen Maddox, director of the international affairs think-tank Chatham House, said Truss will have to say “an awful lot more” to reach the wider electorate.

Unlike Johnson, who made himself a media celebrity long before he became prime minister, Truss rose quietly through the Conservative ranks before she was named foreign secretary, one of the top cabinet posts, just a year ago.

Truss is under pressure to spell out how she plans to help people and businesses struggling to pay energy bills that are due to rise next month to 3,500 pounds ($5,300 Cdn) for the average household — triple the cost of a year ago.

The price spike, driven by Russia’s invasion of Ukraine and the aftershocks of COVID-19 and Brexit, has propelled U.K. inflation above 10 per cent for the first time in four decades. The Bank of England forecasts it will hit 13.3 per cent in October, and that the U.K. will tip into recession by the end of the year.

Truss and her new cabinet also face multiple foreign policy crises, including the war in Ukraine and frosty post-Brexit relations with the European Union.