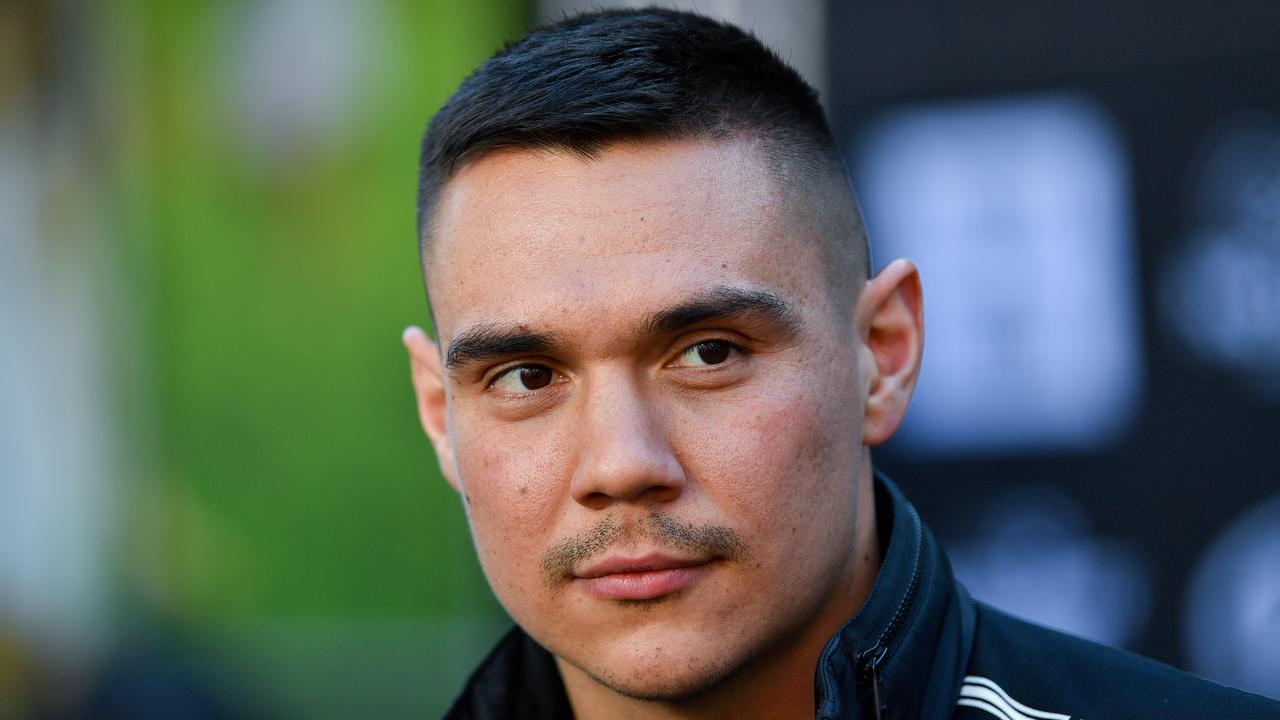 Australian boxing star Tim Tszyu’s world title shot will be locked in soon and he’s determined to make the most of his date with destiny.

Tim Tszyu says it’s only a matter of time until his date with boxing destiny is locked in.

The Australian became the mandatory contender for the superwelterweight world title after his comeback win over Terrell Gausha in America earlier this year.

That victory put him in prime position for a world title, but he has been made to wait for Jermell Charlo and the world of boxing politics to sort itself out.

Tszyu travelled to the US to watch Charlo defeat Brian Castano in their rematch to become the unified superwelterweight world champion.

The WBO last month ordered Charlo to defend his belts (WBA, WBC, IBF, WBO) against Tszyu but official confirmation of a fight between the pair has been delayed date after Charlo also agreed to fight another mandatory challenger, Russian Bakhram Murtazaliev.

But Tszyu (21-0) believes a date and location for the fight against Charlo (35-1-1) will be announced imminently.

“The boys (his No Limit promoters) are working on a date and location, that’s the last time I heard of it,” he told news.com.au.

“There’s a lot of politics in the background but it looks like he’s going to step aside and me and him are going to fight.

Tszyu said the fight will likely be held in October or November, “somewhere in America, I’m hoping Vegas”.

He said he plans to spend the next few months “busting my a*** off non stop”.

“I’ll be heading to America for maybe two months, doing my prep there, getting the best sparring and using the best facilities,” he said.

“Just being in the best shape and being ready for the fight.”

The 27-year-old can’t wait to step in the ring with Charlo and show he can match the cocky American’s strong punching power.

“I want to go straight to the top,” Tszyu said.

“I want to challenge the very best there is out there. I know I’ve got what it takes to win.”

He joked his plan to beat Charlo is “don’t get hit”.

“Manoeuvre and don’t get it,” Tszyu said.

“To be great, you’ve got to prove them all wrong. That’s what it takes. Simple”.

Charlo has repeatedly dismissed Tszyu but the Aussie won’t need to use his chirpiness as extra motivation.

“Nah not really man,” he said.

“I’m self-motivated anyway. It’s just going to be an icing on the cake, especially when you’ve got a loud mouth like that.

“He’s an angry man. He’s like an angry grandpa, that’s how he is, that’s what I’m going to call him.”

Tszyu underwent minor surgery on his hands to repair a tendon and expects swelling on his knuckles to gradually reduce.

“I haven’t started punching faces yet but I’ve started pads and all that stuff. They’re on the road to recovery.”