Brit, 19, drowns after getting caught in rip tide while swimming on a beach in Portugal 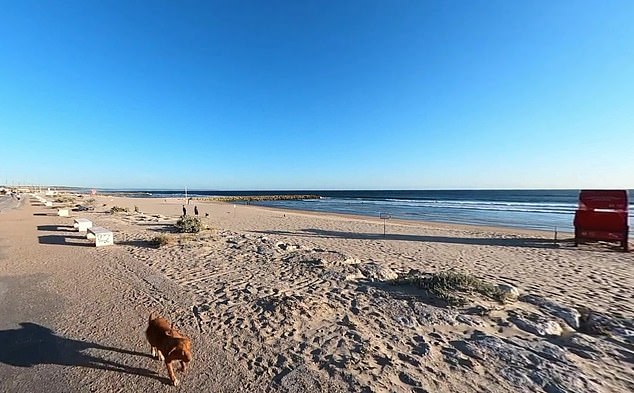 Brit, 19, drowns after getting caught in rip tide while swimming with friends on a beach in Portugal

By Natalia Penza For Mailonline

A British teenager has drowned after being caught up in a rip current while swimming with friends on a Portuguese beach.

The 19-year-old and two pals got into difficulties during a dip off a small sandy beach on the Costa da Caparica coastline south of Lisbon.

Two of the three people, all thought to be Brits, had managed to get out by the time help arrived and a search was launched for the third which ended with his body being discovered on neighbouring Tarquinio-Paraiso Beach.

Portugal’s National Maritime Authority (AMN) confirmed the victim was from the UK.

The beach the unnamed teenager got into difficulties off is just over an hour south of Calada Beach north of Lisbon where British financial consultant Trevor Selling, 45, drowned in June last year trying to save his two daughters when they got into difficulties because of the strong current.

In a statement on the latest tragedy, the AMN said: ‘A 19-year-old young man, of English nationality, died on January 4, on the beach of Dragão Vermelho, on the coast of Caparica in the municipality of Almada, after being caught up in a rip current while he was bathing with two friends.’

It said the alert was received at 6.20pm via the Lisbon Maritime Search and Rescue Coordination Centre and Lisbon Maritime Police were dispatched as part of an emergency response along with coastguards, paramedics and a Portuguese Air Force plane.

The organisation added in its lengthy statement: ‘Upon arrival the Maritime Police found two of the three people said to have got into difficulties in the water had managed to reach the shore through their own means and they were assisted at the scene by medical experts.

‘Searches were immediately initiated for the third person, the 19-year-old man who was subsequently found dead by volunteer firefighters on adjacent Tarquinio-Paraiso Beach.

‘He was declared dead at the scene by a doctor.’

A post-mortem is believed to have taken place but the results are not expected to be made public.

Mr Pelling was trying to aid his two daughters aged 12 and nine at the time when he drowned last June.

They were later taken to Santa Maria Hospital in Lisbon for a medical examination and a psychologist was provided to assist the grief-stricken youngsters and their mum.

In October 2019 yoga teacher Kim Fletcher, 33, and her former hip hop musician fiancee Danny Johnson, 34, died at Zambujeira do Mar in the south-west of Portugal.

Danny swam out to try to save his partner as she got carried away by a dangerous rip tide, but they drowned after he reached her and tried to get her back to the shoreline.

The couple, from Stoke-on-Trent, had a four-year-old daughter called Aveyja and also cared for Kim’s 15-year-old girl Maicee from a previous relationship.

SNP accused of ‘kicking can down road’ over Lord Advocate reforms