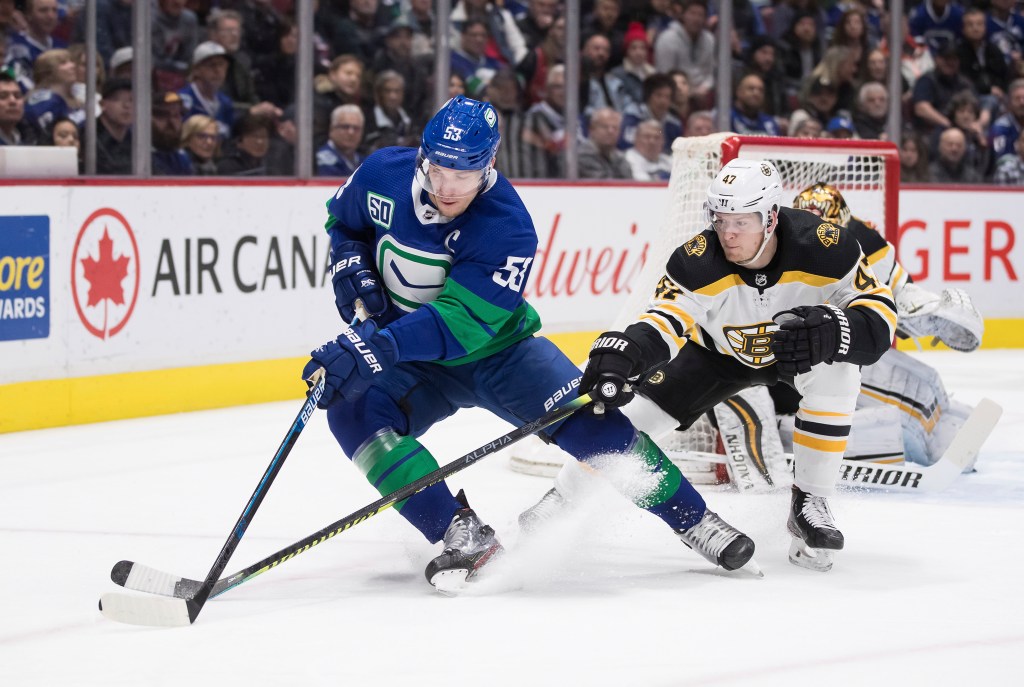 What’s our first inclination when contemplating the trade deadline for a Bruins team that’s 30-4-4?

Be careful. Don’t screw up a great thing with an overreach at the deadline. Just make a depth add.

But that notion disappears in seconds.

Players like Patrick Kane or Jonathan Toews or Timo Meier or Jakob Chychrun could be moving – and perhaps to an Eastern Conference competitor near you. Desperation is always lurking in Toronto. Carolina has already gotten a bump in the return of Max Pacioretty. Tampa always seems to find a way to make a splash. A Kane reunion with Artemi Panarin would move the needle for the Rangers significantly.

No, the Bruins have to go all in, just as Patrice Bergeron and David Krejci did when they signed their incredibly team-friendly one-year deals. What the B’s have done so far is close to historic, but that can be undone by one or two key injuries in the spring. We all know what playoff attrition is like. GM Don Sweeney must do everything in his power to safeguard against that.

But while much of the speculation has centered around the 34-year-old Kane, he is not the player the B’s should put at the top of their priority list.

That player is Vancouver’s Bo Horvat.

But if Sweeney could somehow do what he did with Taylor Hall and Hampus Lindholm, his last two deadline acquisitions whom he was able to extend to long-term contracts, there’s not much of anything in the B’s system that should be considered off-limits.

That should mean their top prospect Fabian Lysell is in play. And no, that’s not an overreaction here to his pointless World Junior Championship tournament that ended for him on Thursday with a five-minute major for a check to the head. As disappointing as the tourney was for Lysell, his 8-11-19 totals in 20 AHL games in Providence are not a mirage. He’s still a good top six prospect and his potential inclusion in a deal would be a tough one to swallow for the B’s, who are short on capable young (aka cheap) players they can insert into the NHL lineup. But you have to give to get.

As tough as it would be for the B’s to give up Lysell, he alone would not get a player the caliber of Horvat. They’d have to give up their first-round pick, which would be – if the B’s are to get where they want to go – in the 30s. While that would make it easier from the B’s standpoint, it also means more would be needed.

Their second-round pick is now in the hands of the Anaheim Ducks, thanks to the Lindholm deal. The preference here would be to not give up centermen Matthew Poitras (2nd-rounder, 2022) or Brett Harrison (3rd-rounder, 2021). Both are better than a point-a-game players with their respective junior teams. But if one of them gets it done, so be it. There’s also forward Georgii Merkulov (7-17-24 in 29 games) and goalie Brandon Bussi (10-2-3, .935 save percentage, 2.12 GAA) in Providence. There’s goalie prospect Philip Svedeback (4th round, 2021) in Providence.

Other teams have more assets, to be sure, but the B’s aren’t totally bereft of them. And considering the position in which they find themselves, the B’s should be willing to extend themselves a little further than most teams. Whatever the combination of picks and prospects, it should be doable if Sweeney and the B’s are willing to grossly overpay.

Rarely is that advisable. This is a rare occasion.

The trick, of course, would be for the B’s to be able to extend Horvat, who will be getting the best contract of his career, wherever he signs. The B’s already have one of those elite players they’ve yet to deal with in David Pastrnak.

But if they could figure out the dollars and cents, a Horvat acquisition would not be a home run, it would be a grand slam. It would provide a short-term shot in the arm for a true Stanley Cup contender and long-term top-six centerman for the days when Bergeron and Krejci are no longer here. That could be as soon as next season.

Yet even if there are no long-term guarantees on Horvat, this team is worth that short-term splurge. A line of Horvat-Krejci-Pastrnak would be awfully formidable, not to mention a Taylor Hall-Charlie Coyle anchored third line.

The impressive team that Sweeney has assembled, led by the coach he hired in Jim Montgomery, plays with a daring, safe-is-death attitude. He needs to match it.