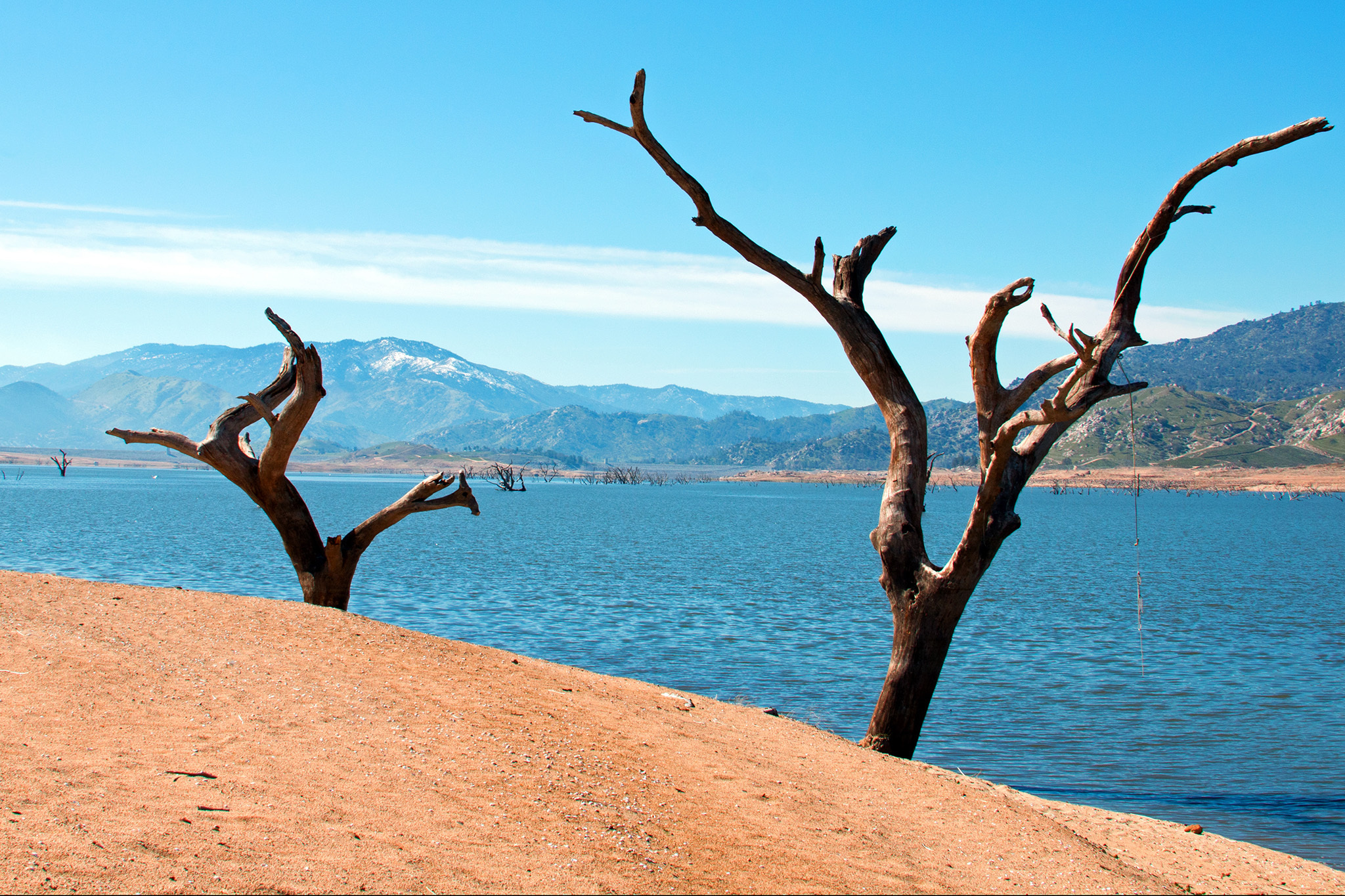 At Lake Isabella, nestled within the southern Sierra Nevada foothills in Central California, the telltale signs of drought are all too visible. The shoreline resembles a giant toilet bowl ring around the lake’s edge, while the detritus of long-forgotten secrets in various stages of decay poke up from the lake’s bottom.

Now at 8% capacity, the man-made lake is revealing the foundations of one of the Wild West’s most infamous towns — and it’s all visible from the shore, or accessible by boat.

Welcome to the re-emergence of Whiskey Flat: one of the wildest, most storied, tragedy-laden places to ever come out of the Old West and the Gold Rush era. A place with a history so familiar, it’s stitched into American folklore. Many of the tropes, tall tales and tragedies of the Old West can be traced to this long-flooded valley.

Located 35 miles northeast of Bakersfield, the lake sits at the intersection of the natural north and south forks of the Kern River, 2,500 feet above sea level. Hot in the summer and snowy in the winter, the region is a year-round destination. Most importantly, it has been one of the chief water suppliers for Kern County’s agricultural operations since the early 1950s.

The tributaries have also provided water runoff into the verdant valley below, inhabited by the Tubatulabal, Kawaiisu and Owens Valley Paiute. Later, the area was the scene of one of the most tragic and brutal ambushes on Native Americans by U.S. soldiers during the Civil War era. The region was also home to ongoing settler family feuds and, later, the location of movies that set out to dramatize these stories of the Old West.

Valley discovered at the end of the Gold Rush

In 1860, toward the end of the Gold Rush, a lone prospector named Lovely Rogers discovered the precious ore in what was then a previously unexploited area. Rogers’ mule reportedly got away from him, and when he picked up a heavy rock to throw at it, well, you guessed it — what he held in his hand, legend says, was a pure 42-ounce gold nugget.

That single find led the 49ers to find their way from quickly depleting Northern California encampments to the southern end of the Sierra Nevada, and a miners’ camp soon sprung up.

Later that year, Gold Rush-era whiskey peddler Adam Hamilton pitched a tent in camp and set up a pair of whiskey barrels straddled by a board. Hamilton called his makeshift saloon “Whiskey Flat,” the namesake of the town that rose up around it.

Soon after, Whiskey Flat would see the founding of several mines, led by the construction of the Big Blue mine, which remained active until 1942, yielding some $12 million in gold. To support the more than 200 miners who worked at Big Blue, there was a church, three saloons, three hotels and a mercantile.

It “was a town of miners, outlaws, secessionists and hard-working ranchers who had quick tempers, fast guns and their own code of swift justice,” a 2004 Los Angeles Times historical recollection of the area’s rise noted. “In 1883, unpaid miners torched the Big Blue mine and in 1892, history records, the Gibson brothers shot and killed the Burton brothers in a mining dispute.”

As soon as the town sprang up, seemingly overnight, the miners and the sheepherders that flooded the region pushed out the largely hunter-gatherer tribes that had occupied the valley for thousands of years.

During the bloody, two-year conflict between the settlers and native tribes, 60 white settlers and 200 Native Americans would be killed. On April 19, 1863, local settlers — along with a detachment of the 2nd Regiment California Volunteer Cavalry led by the 29-year-old Irish-born Capt. Moses A. McLaughlin — sent 70 soldiers on an ambush of local Native Americans who were camped on the Kern River about 2 miles north of Whiskey Flat.

“The boys and old men I sent back to the Camps and the others, to the number of 35 [Native Americans], for whom no one could vouch were either shot or stabbed,” McLaughlin would later recollect of what became known as the Keyesville Massacre. (A trio of memorial crosses stand at the site of the massacre today.)

By the middle of that summer, McLaughlin and his men would capture more than 1,000 Native Americans and escort them on a 200-mile trail of tears to Fort Tejon and the Sebastian Indian Reservation.

McLaughlin was court-martialed and discharged from the military on Jan. 22, 1864. He then moved north and graduated from UCSF’s Toland Medical College in 1878 and later ran for San Francisco supervisor in District 11.

Whiskey Flat rivalries and its portrayal in pop culture

One year after the Keyesville Massacre, the women in Whiskey Flat reportedly decided to change the name to Kernville, after Edward Kern, a topographer who helped John C. Fremont map the region on his 1848 western expedition.

The name stuck, though a celebration of Whiskey Flat continues every Presidents’ Day weekend, in which thousands descend upon the area to don settler garb and celebrate the area and its history across four days.

The region also saw deep-seeded multi-generational familial friendships and rivalries, none more so than between the Gibson, Burton and Walker miner families, with the quintet of Walker brothers the most notorious of the bunch.

Each one was a quicker draw and more hot-headed than the last, culminating with Newt, the second to youngest. To exonerate himself from an April 1905 run-in and shoot-out that ended in the deaths of two men, Newt showed a jury he could fire off six shots before a hanky — dropped by his defense attorney — hit the ground: the fastest gun in the West.

The courtroom dramatics got Newt off on a double-homicide charge — he maintained he shot and killed the pair of family rivals in self-defense — and his legend permanently enshrined. His life story became a trope used so often that there’s a name for it: the quick draw. That archetype carried much of Clint Eastwood’s movie cowboy career, from his breakout in “A Fistful of Dollars” to his Oscar-winning turn in “Unforgiven.”

The legendary rivalries and the backdrop of the Old West soon drew film crews from Hollywood to the area to shoot the Western serials of the early to mid-20th century. Whiskey Flat can be seen in a slew of TV and movie westerns, including in John Ford’s 1939 Oscar-winning film “Stagecoach.” To assist and encourage the number of productions coming to the area, the town even built a block of flat front frontier-style buildings, known as “Movie Street.”

Kernville resident Chuck Barbee, a retired cinematographer and film producer whose work includes credits on “Gremlins,” “Against All Odds,” “The Last Starfighter” and TV’s “Night Court,” has been busy writing and shooting a documentary on the history of Whiskey Flat and the Kern River valley. The receding waterline of Lake Isabella, he says, exposes the foundations of the town — and a time — that was.

“There are still stories of an untold Old West here,” Barbee told SFGATE. “What makes this place special is that it’s virtually unchanged, and you can still see what it was like when the first settlers came here in 1861.”

During the filming of the first installment of his documentary, he spoke with more than 70 residents, many of whom are related to the area’s first Native American or settler populations — or both.

“We don’t think of it today, but we’re still only two generations away from those old times,” he says.

The closeness to the bygone age is also what’s created some interesting side stories over the years. “When they were filming Westerns here, the movie crews would drink and gamble with some of the locals,” he said, “and, you know, these are people who would take their rivalries seriously, so — you know there were some close calls right outside Movie Street.”

Barbee says several ranchers would collect old equipment like decommissioned freight wagons and stagecoaches and store them on their property. “They’d have cowhands, heads of cattle, and all the vehicles and say to [location] scouts, ‘I’ve got everything you need, where do you need it?’”

Singing cowboy Roy Rogers, along with William Boyd, who played Hopalong Cassidy, were regulars in town. Rogers would even participate in the town’s baseball league. “They said he could pitch as fast as he could draw,” Barbee chuckled.

During World War II, the U.S. government relocated the Movie Street facade to a place right outside Barstow, where the military used it for target practice. “Why they didn’t just keep it intact and build [the military] a new one is beyond me,” Barbee says.

Following the war, the government lay claim to the area and decided to build a dam and reservoir. The townspeople of Kernville tried to move what buildings they could to higher ground nearby, but most of the town — the general store, jail, and a Methodist church — were blown to smithereens. The buildings’ foundations are all that remain today, as the lake level lowers to reveal the secrets they hold.

“It’s fun to go out there,” Barbee says. “I don’t think you’re going to find any dead bodies like Lake Mead, but there certainly are old ghosts around those buildings.”

‘We’re just another part of its long and prolific history’

In 1953, the foundations at Old Kernville and nearby Isabella — located in the deepest part of the lake, a spot called Rocky Point — were covered in water. The Isabella remains are also slowly being revealed now, Dianna Anderson, curator of the Kern Valley Museum, recently told the Bakersfield Californian.

In place of Old Kernville and Isabella, the towns of Lake Isabella (population 3,621) and new Kernville (population 791) rose up on the higher ground adjacent to the new lake. But at least one resident of the newer developments is happy to see a bit of the old appear once more.

“There’s so much hand-wringing about the low level of the lake,” Michael Downey, a local contractor told the Bakersfield Californian of finding the old foundations revealed by the lake’s retracting waters. “Here’s something positive. … We have the ability to look with more clarity. … We can stand on it and touch it.”

As filmmaker Barbee continues researching and shooting his documentary, he says he marvels at the possibility of what once was coming to life again, along with the forces of nature that are beginning to reveal it all. “The Kern is still a mighty river,” he says. “And there may still be another chapter for this region. After all, we’re just another part of its long and prolific history.”

Dog Money Saving Hacks: Here are 5 expert tips to save cash on your adorable puppy during the cost of living crisis