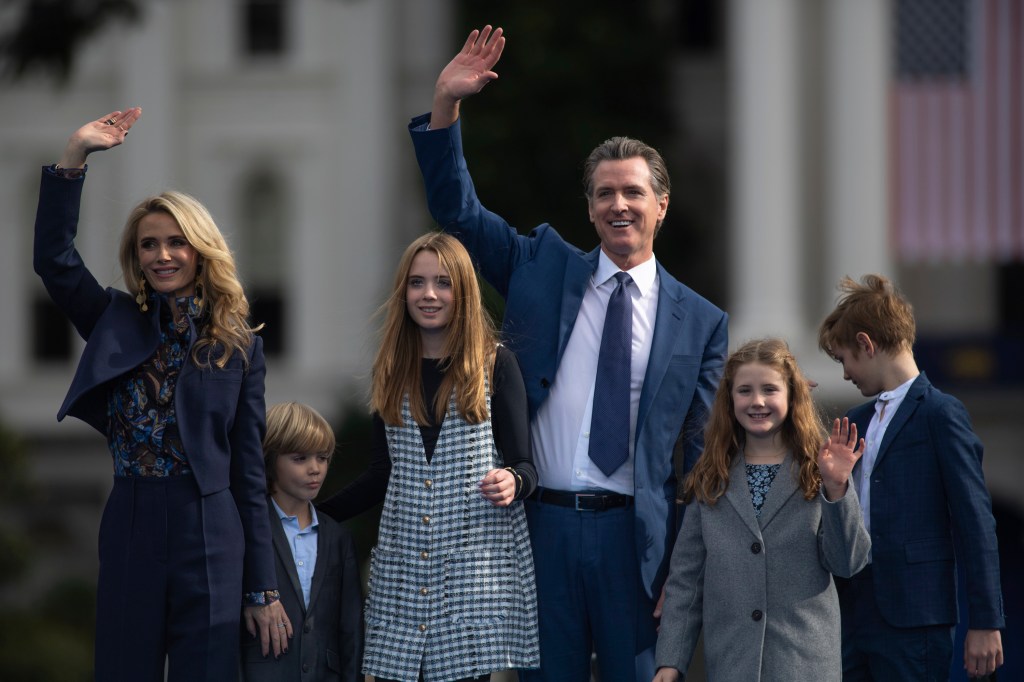 Launching into another four years as governor during a turbulent period in California’s history, Gov. Gavin Newsom used his inaugural address Friday to fire off a round of his characteristic scathing attacks against Republicans — proclaiming “the battle lines are drawn.”

And, in no accident, Newsom began the day by leading supporters on a march through Sacramento to the state capitol to contrast with the events of exactly two years ago in Washington, D.C., when a mob of President Donald Trump’s supporters stormed the U.S. Capitol.

After the march, Newsom kicked off his second term by holding up California as a nation-leading beacon of progressive values in everything from same-sex marriage to clean energy, and he blasted red-state politicians for selling “regression as progress” and “oppression as freedom.” His wide-ranging speech also acknowledged where his state needs to do better — including on homelessness. And he reminisced about his own childhood in the Golden State, from his first time in San Francisco’s Chinatown to hot summer days rafting down the American River with his father.

Newsom ended on a reconciliatory note, promoting unity and urging everyone to “triumph together.” But the overall message of the speech, as has become common for Newsom since rumors began about his presidential ambitions, was the governor pitting himself squarely against red-state rivals and Republicans in Congress.

“These politicians, devoid of any new ideas, pursuing power at any cost, are playing on our fears, our prejudices and our paranoias,” he said, flanked by California-flag-waving supporters with the state capitol building in the background. “They’re promoting grievance and victimhood in an attempt to erase so much of the progress you and I have witnessed in our lifetime.”

Republicans were quick to fire back.

“If Gavin Newsom’s first four years as governor are any indication of what’s to come, Californians are in for a rough ride,” California Republican Party Chairwoman Jessica Millan Patterson said in a statement as she excoriated the governor for the state’s issues with cost of living, homelessness and water storage. “Whether lecturing red states, plotting a laughable White House run, or making the rounds on cable news, the only lesson he’s actually teaching the nation is how to move your state in the wrong direction.”

Newsom’s speech, given days before the governor is set to unveil this year’s budget proposal, comes as he finishes a term that included a global pandemic, social unrest and devastating wildfires but which also saw the state enjoy a record $100 billion surplus. As he begins his next term, he has a lot working against him — including a projected $25 billion deficit, soaring inflation and rampant job losses, and an intractable affordable-housing shortage and homelessness epidemic.

“As we go forward, we must continue our quest for an honest accounting for where we’ve fallen short,” he said. “On affordability, on housing, on homelessness. … We must reconcile our shortcomings, bring everyone along.”

But he offered little in the way of concrete solutions in the inaugural speech.

Though Newsom has pledged to finish his four-year term as governor and said he won’t run for president in 2024, he continues to place himself on the national stage, attacking red states’ bans on abortion and conservatives’ lack of action around gun control — and publicly sparring with Florida Gov. Ron DeSantis, who is considered a likely Republican presidential candidate.

Any national aspirations will be colored by his performance in the Golden State. One of the first challenges Newsom will now face is proposing a state budget — something he must do by Jan. 10. A record surplus allowed Newsom to pour money into everything from homeless housing to climate change to his CARE Court project, aimed at pushing people with severe, untreated mental illnesses into mandatory treatment. But most of that funding was in one-time grants. And with the major deficit on the horizon, cuts are likely in order.

A recent report estimates the state would need to spend $8.1 billion a year on homelessness to eliminate the problem by 2035, but it’s unlikely this year’s budget will come close to that target, said Sharon Rapport, director of California state policy for the Corporation for Supportive Housing — one of the organizations that published the report.

Even so, Rapport hopes to see this year’s budget focus on funding permanent housing instead of pouring money into short-term shelter programs that don’t cure homelessness. And she hopes to see ongoing investments instead of one-time funds.

Meanwhile, a group of activists representing low-wage workers, low-income families and people struggling to afford housing are urging Newsom to tax billionaires and corporations to fund programs that help struggling Californians. The activists, organized by The Alliance of Californians for Community Empowerment, plan to stage a protest Monday at the state capitol building.

“With over 180 billionaires in this state and the wealthiest corporations in the world living next door to us,” James Daniels, an Antioch renter who lost his job during the pandemic, said in a news release, “there is no reason Governor Newsom and our legislators can’t fund the services we desperately need to allow our communities not only to survive this crisis, but to thrive.”

A mucosal vaccine could be a COVID-19 game-changer. So why doesn’t Canada have one? – National

NASCAR’s Kyle Busch apologizes after being detained in…